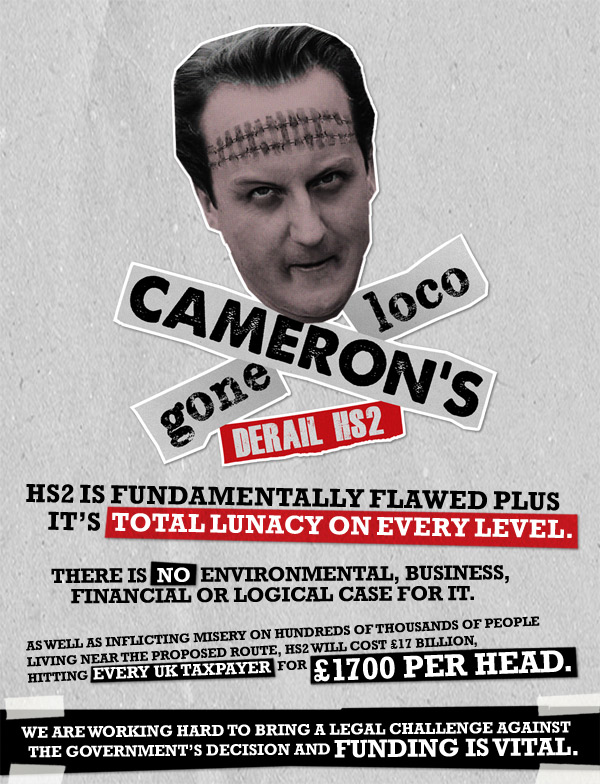 David Cameron - Living in a dream world, where the only thing that matters is his 'legacy'

Campaigners against HS2 have branded the Prime Minister ‘schizophrenic and delusional’ following his speech about future infrastructure needs on Monday (19th March 2012).

After starting his speech saying that he wanted to put more power in people’s hands enabling local communities to decide their neighbourhood plans, he said that pushing through HS2 was to “hold fast to our vision in the face of vested interests”.  Meanwhile David Cameron’s speech praised the work of ARUP, the firm which sponsors many of the organisations lobbying for HS2 and has been awarded a string of multi-million pound HS2 contracts, despite having produced three versions of error-strewn plans thus far.

Mr Cameron said that the most immediate example of our long-term thinking is our commitment to deal with the disastrous legacy of debt and deficit that we inherited, whilst not wanting to leave liabilities for the future. In this he seems not to have noticed that the ‘headline’ costs for HS2 have risen in just two years from £32.7bn to £36.4bn, and that this figure does not include tax or trains, meaning the actual liability of HS2 will be £54bn and is likely to require an ongoing subsidy. Government predictions are that HS2 will make an operating profit, but this assumes exponential passenger growth during a period when fares are planned to rise faster then inflation and none of our other passenger railways make money. Whilst citing the principles of Adam Smith, the Prime Minister failed to note that the institute set up in his name is opposed to HS2.

Despite the very real need for urban redevelopment of brownfield sites, the speech slipped in Government plans for consultations on ‘new garden cities’. With HS2 Ltd Chief Engineer Andrew McNaughton letting the cat out of the bag last Thursday, saying the area served by the HS2 station near Birmingham Airport would be the site of a new city, it is likely that planned out of town stations in the East Midlands and South Yorkshire will get the same.

“We cannot believe that David Cameron claimed those fighting against losing their homes and businesses, fighting against the Government being completely irresponsible wasting billions on a project we do not need, and fighting to save the  countryside are those with vested interest who should be opposed, whilst not noticing the whole project is being driven by the vested interest of those who will make money out of it. To do that whilst praising ARUP whose level of detail and accuracy in drawing up HS2 plans has been minimal and ignoring the fact many of those lobbying for HS2 are sponsored by ARUP is schizophrenic and delusional. Now the agenda to build around these out of town stations is apparent, some of the chambers of commerce which have been lobbying for HS2 may want to think again, as they will see be business parks, retail parks and suburban shoeboxes competing with the established cities and sucking development away.”

“Cameron has shown that he has one policy for this country, blowing billions of pounds not redeveloping areas where people live and jobs are needed, but ploughing up green belts everywhere because that’s what the construction companies he is in bed with want and now he has started talking about the ‘legacy’ he wants to leave behind.”

“In saying he wants these new cities, Cameron has shown he has clearly never actually been on a train, as every time I am on a train through a city I see industrial graveyards crying out for redevelopment. They already have transport links and populations willing to work, but they are simply not where developers want to build, as the green belt is a cheaper option with better profit. As always it is not people, but money that Governments of all colours care about. It wouldn’t be so bad if it might be the Government making money out of these schemes, but it’s not it’s their mates in sharp suits who take them for fancy dinners. Big business will make the money while muggins the taxpayer will have to cover the losses.”


“With HS2 he was true to the real reason for building it, simply that other countries have got it, falsely claiming as Ed Miliband did last week that we are falling behind, when according to the House of Commons Library, in 2009 we had more miles of high speed rail per acre in the UK than any over country in the world . He said we had to be like other countries and build new networks, but doesn’t care that the countries which have developed new high speed rail networks have had massive financial problems, because their networks have cost so much more to build than thought and only now are they finding that the passenger forecasts used to justify building the lines were a work of pure fiction, he just wants his shiny train set, and like HS2 Chief Engineer Andrew McNaughton, the place in history that he thinks his ‘legacy’ will bring.”

“It is easy to say something is in the national interests and hope that people who have not looked into the plans will accept that, but the biggest national interest is sorting out our financial mess. That is the so-called ‘vested interest’ of organisations which have come out against HS2 include the New Economics Foundation, the Institute of Economic Affairs, the Taxpayers Alliance and the organisation named after the person  whose principles Cameron claimed to be following, the Adam Smith Institute.

“However none of the organisations pushing HS2 are willing to pay for it, expecting the exorbitant cost of HS2 to be paid for by the taxpayer.  These companies that expect to make money from building HS2 are the real vested interests.”