While all the focus following the statement from Patrick McLoughlin last week was about the Trans-Pennine and Midland Mainline electrification projects being paused, what seems to have been missed was the fact that other projects might be facing the boot too.

When he stood up in the commons on Thursday, besides booting the above projects into the long grass and seeming to claim that the next Trans-Pennine franchise would have new electric rolling stock without an electric track, the snippet missed by most is that he has asked newly appointed Chair of Network Rail Sir Peter Hendry to “Develop proposals, by autumn, for how the rail upgrade programme will be carried out.” The Midland Mainline and Trans-Pennine projects got the headlines because the announcement regarding them meant stopping work which was already underway, but what wasn’t mentioned were the projects not yet started, and maybe some which are, which would join them in the long grass. Basically, besides the projects he specifically mentioned as going ahead, which sadly but obviously included HS2, all bets are off. 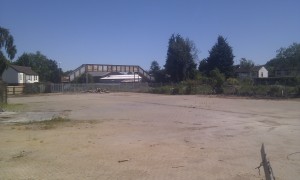 The former and future Kenilworth Station site, with not a lot of work going on right now.

This point was spotted by the Kenilworth Weekly News, who felt the need to ask if this meant the proposed Kenilworth Station project would go ahead. The Department for Transport replied that:

“We are not talking about specific projects at this stage. We have confirmed a review of our five year plan but the specifics of projects and what will be affected has not yet been made. These talks are expected to be ongoing in the next few months.”

Network Rail CEO executive Mark Carne had said they were facing “some stretching targets” and that the pace of improvement is behind expectation, and confirmed: “I welcome the fact that the Transport Secretary has asked Sir Peter Hendy to work with me and my team to develop proposals for re-planning the programme over the next few months.”

However, this wasn’t quite the right answer to the question from the KWN. In terms of the station, they should have actually got the answer that Warwickshire County Council felt the need to publish the next day (today, 30th June): 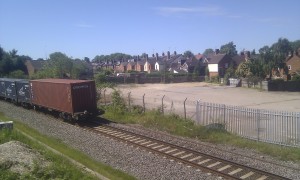 The single un-electrified track is going to be a problem if there are ever going to be any trains stopping at Kenilworth Station.

“In light of last week’s announcement by the Department for Transport, we’d like to reassure people that the Kenilworth Rail Station project is fully funded and the station build will still be going ahead. Warwickshire County Council and its partners will continue to monitor for any potential impact on the scheme and will be pushing ahead with the project, with the aim of opening in December 2016.”

The council made this statement as they have been given a £5m grant (assuming it has all been paid!) for the building of the station, although no work has happened since demolition was completed in April. The reason is apparently the need to move the signals, but there has to be a question whether any trains would actually stop there.

Back in January 2013, the Government announced ‘HLOS’, the High Level Output Strategy, which included plans for an ‘electric spine’ across the country. Whilst Trans-Pennine electrification from Liverpool to York via Leeds had already been ‘committed’ to, this was the first mention of the Midland Mainline project. 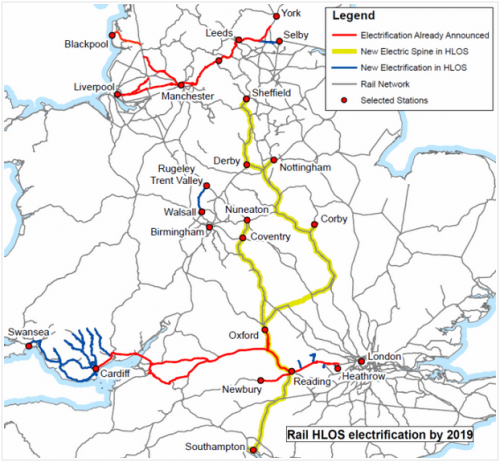 Here are all the promises made by the HLOS plans, but how many will survive past Autumn?

Also listed as part of the ‘electric spine’ was double tracking and electrifying the line from Coventry to Leamington, i.e. the track through Kenilworth, which most observers think would be essential (at least the double tracking bit) if a newly-built Kenilworth station were to actually have any trains stopping at it.

That part of the ‘electric spine’ formed just a section which was planned to see electrification of track all the way from Southampton to Nuneaton, with work due to start in August 2018.

Also, whilst McLoughlin was happy to confirm Great Western electrification, he seemed evasive as to whether it would now get all the way to Swansea, and made no mention of the planned electrification of several Welsh Valley railways, nor the proposed GWML link to Heathrow.

Also, work is currently underway on part of the East-West Rail Oxford-Bedford plan, but not as far as the section where it would cross HS2, so this could also be another project we will have to wait and see about until ‘Autumn’. To be honest, there are many, many proposed projects for Control Periods 5 & 6 which could be under threat, especially if the target is to get a total budget which adds up to £38.5bn, which is of course dwarfed by the massively under-estimated spend of £50bn (in 2011 prices) needed for HS2. We will try our best to find out, but if more projects do get cut, we all know where the money will be going instead!