Today, Thursday 26th January 2012, the Transport Times ‘Making HS2 Happen’ event which had originally been scheduled in the week of the aborted HS2 announcement in December will take place. It has been organised by Transport Times, an organisation run by the Yes to Hs2 Director David Begg, who recently said it had been a mistake on his part to have lobbied for the upgrade of the West Coast Mainline ten years ago.

On Friday 20th January, Begg gave a lecture at Nottingham Trent University saying how much he likes bold leadership from politicians who don’t pay attention to public opinion. In his opening gambit, he said the Betelgeusian Ford Prefect in the Hitchhikers Guide to the Galaxy was from Mars. This and the map he drew showing the East Midlands to the north of Sheffield underlined how interested the director of the Yes to HS2 Campaign is about facts. There was one statement though we could all agree on: “It’s not the best projects that get funded, it’s not even the ones with best business case that get funded, it’s the ones with political lobby behind them that get funded.” Or so said the man behind the political lobby for HS2.

Begg had been surprisingly absent from the media around about the time of the HS2 announcement, so the lecture would be a great chance to hear what he had to say about the project. Well that’s what was thought, but the truth was that the lecture, whilst entertaining, was slightly light on any factual content. The first part of the lecture was of course, sucking up to the audience. “Nottingham and Edinburgh first started talking about trams at the same time, but Nottingham has really got a grasp of it and is much further ahead” said Begg. Of course the thing he neglected to mention is that he had nothing to do with the trams in Nottingham, which have been passing the Newton building where the lecture took place in for the best part of a decade. With Edinburgh, Councillor Begg had been one of the main proponents for what is referred to as the ‘Edinburgh Tram Disaster’.

There were meant to be ten lines built in the City, but there has been real trouble just with the first one. They put in the lines, then they were torn up as they had been built with the wrong materials. The trams, which were optimistically bought a few years ago have been leased off to Croydon, as the first (possibly now only) line is now due to be finished in 2014, four years later than planned. When I say finished, of course what is meant is three miles shorter than was planned in the first place for £773m, instead of the original cost of £545m.

Begg went on to say he’d been asked why he was supporting HS2 and wished to assure the audience that he was concerned that HS2 would take too much resource away from other transport projects, however in his judgement HS2 is a transformational project which does not take money away from other transport projects, but competes with health and defence! Of course the Chairman of the Northern Way then went on to say that despite HS2 not sucking money away from other infrastructure projects, the Northern Hub hadn’t got any funding and he had no idea where money to electrify the Midland mainline would come from .

Begg stated that both the people holding top jobs in the DfT, Theresa Villiers and Justine Greening were pro-environment despite the lack of any green credentials for HS2, but then went on to admit that Aviation strategy has been built around winning marginal seats around Heathrow, which is where most Transport Secretaries seem to come from!  On aviation, Begg, a director of Heathrow owners BAA, was adamant that the East Midlands station would not be at the airport. He said he was signed to confidentiality on the issue of where the station would be, which was odd because I was under the impression that the report hadn’t gone to Government yet. Then again he did originally have the Transport Secretary booked to appear at his ‘Making HS2 Happen’ event on the day the announcement was meant to have happened back in December!

He went on to up the urgency for HS2, saying the West Coast Mainline would now run out of capacity a lot earlier than the DfT expects, in just eight years time and the East Coast Mainline would do so in ten years, both a long time before HS2 will be built. When confronted with the annoying fact of the ONRR yearbook stating Virgin trains have average occupancy of 160 (09-10) and seats for about 500, he had no answer. 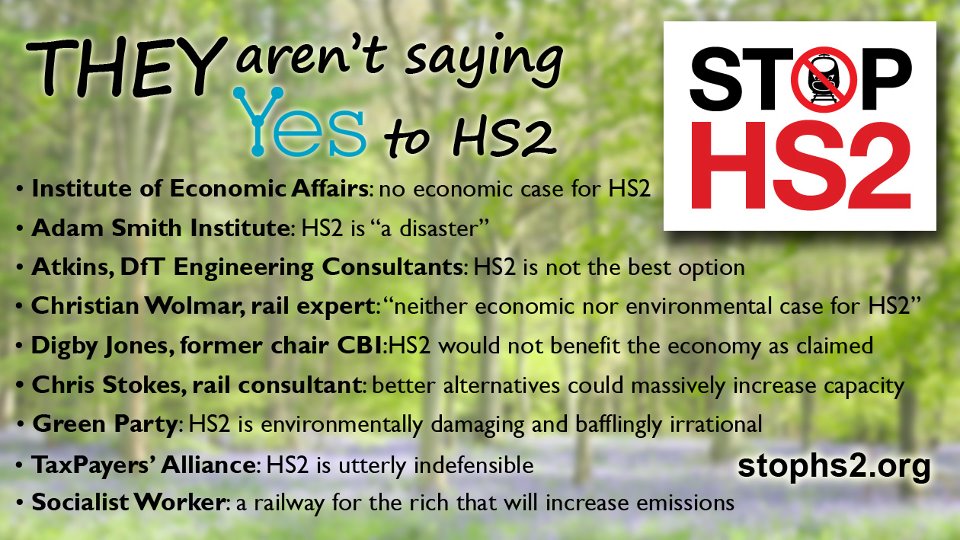 Some quotes from those not saying 'Yes' to HS2

Despite taking place in a University, the format of the discussion afterwards was obviously intended to lack any form of intellectual rigour. Despite specifically being asked to attend to put a counterview to what David had to said, the chair of the meeting did not seem interested in any opposing view seeing the light of day. It got to the point were too many of the audience were pointing though, so there was an attempt to get through the list of short statements in the attached picture, but even that saw an intervention from the chair, which meant more time to speak.

The first thing to point out was that at the end of the lecture, Begg started talking about the fact engineers were looking at a different shape to the ‘Y’ Network. Stupidly, I had expected him to draw the only other alternative which was ever spoken about, an ‘S’ shaped network, but no he came up with a ‘H’, and wouldn’t you know it, that went through Nottingham! It was like watching the end of an episode of Bullseye when the competitors had failed to get 101 with six darts, the ‘H’ was wheeled out – ‘Just look at what you could have won’. It was a shameless attempt to make the audience feel better about the concept, thinking ‘Well that’d be OK’, despite the chance of it getting built being slightly less than zero.

There were obvious pops at those opposing the project. Despite specifically wearing an old NTU polo shirt for the night, I was told “The Chilterns opposed the first railways” and he made the cardinal sin of saying that the cost of £1000 per taxpayer (it’s more than that David!) from the £32bn total doesn’t include fare revenues. I put it to him that if you want to include revenue from the running of HS2, the cost per taxpayer goes up as it is never due to make a profit. It was another thing he failed to answer, but he stuck with the idea that the journey time saving is a consumer surplus.

There was another thing we agreed on though, that they won’t build both northern legs of the Y at the same time. Of course he tried to say that the Eastern one would be built first as it passes through bigger centres of population. Of course it’s not passing through them, but passing by them. By the time he got onto that, there were others who started to mention that wasn’t just sucking economic activity away from city centre, but sucking rail services away from city centre and there were those who noticed that at the cost there could be a lot more investment in sustainable local tansport solutions.

Finally, he mentioned Roosevelt and his way of getting out of the Great Depression by investing in infrastructure. However there was a big point he missed with FDR, the infrastructure projects which worked were those which provided value for money and filled a real need. From his failed projects which were simply about keeping people busy whilst burning cash, we get the world ‘Boonboggle.’

email
Tags: News
News
6 comments to “I Begg to differ – An evening with David Begg.”