Whilst over the last couple of years Government have tried to backtrack and claim that HS2 is all about capacity, not speed, the fundamental tenet of the entire business case are the reduced journey times HS2 would bring, which only come about because of the speed HS2 would travel at.

This is important for them because journey time savings are used to work out the Benefit-Cost Ratio for the project, no matter how spuriously the Government have literally calculated the maxim ‘time is money’, based on the idea that all time on trains is wasted. The reality is that if the BCR had been more realistic initially, HS2 may well have never got this far.

There have been some obvious bits of HS2 Ltds journey time predictions which in the past have clearly been made up. The most obvious one being that it was once claimed HS2 would get from London to Crewe in 58 minutes, but would only take one more minute than that to get to Manchester Airport. This discrepancy has been sorted out with the latest figures produced along with the ‘Phase 2a’ announcement last month, which saw a most journey times moving a minute or so either way.

However, the ones that have always, and still do, look more than a bit optimistic are those around the East Midlands. Besides the fact that, like with the previous example, getting to Toton (or the ‘East Midlands Hub’) is projected to take 51 minutes, or in other words just 2 minutes longer than the London to Birmingham journey time, the thing that has always stuck out is the validity of how long it would take to get from Toton to anywhere people actually want to go.

According to HS2 Ltd, whilst the train from Euston to Toton will take 51 minutes, it will take only 17 minutes to get to the current Nottingham Station, and 20 minutes to Derby. In that, HS2 Ltd state they have assumed a five minute interchange time so the actual journey times they expect are just 12 and 15 minutes.

There is of course no proposed regular transport solution in terms of getting to Derby, though there *might* be one train an hour, serving six hourly HS2 arrivals. Anyone who seriously believes it is possible to do that journey by taxi in a quarter of an hour has clearly never used the A52, or if they did, they did so at 3am in the morning. 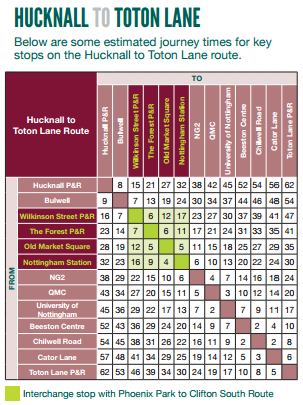 With getting to Nottingham, there is a public transport to solution, and that is to use the tram. Since an extension was opened in August, the tram terminates at a park and ride in Toton, about half a mile from the proposed HS2 station, and obviously the local authority are asking for money to extend the tram network to the proposed station, and beyond.

However there is one rather large problem with this. Far from taking 12 minutes to get to the current Nottingham train station, the NET timetable shows the tram actually takes 30 minutes. On top of that, it is clear that in assuming a 5 minute interchange time, HS2 Ltd have assumed not only that the tram stop is closer than it is, but will always be a tram there waiting, which will set off the moment all HS2 passengers get on it. The reality is that even in peak times the trams only run every 7-10 minutes, and of course if the tram did get extended the journey time would be longer.

As it currently takes 90 minutes on the train from London to Nottingham, it is hard to see how using HS2 and the local tram could possibly ever beat that time.

email
Tags: News
News
4 comments to “Taking HS2 to the East Midlands will be completely pointless.”