Whilst I’m no longer Campaign Manager for Stop HS2, after eleven years it’s something that I suspect I will never totally walk away from. In fact it seems that I’ve done more in the last month since I officially stepped down than I did in the two months before. But obviously whatever I do, the association will always be there, and I suspect there will be some journalists who will keep on ringing me up for years to come just so that I can keep saying “I told you so” on a loop.

So it won’t come as much of a surprise for you to know that when I did what so many of us have done this week – go to the pub – the subject of HS2 wasn’t far behind. The bloke at the table across, basking in the glory of being able to have a pint and start talking to a random stranger, took exactly that opportunity, starting off with “You’re the campaigner against HS2 aren’t you?”. That was a great start which immediately endeared him to me. You have no idea how many times I have been, and certainly will be in the future, referred to as “The man from HS2” or similar, with people missing out the rather essential “Stop” from that moniker.

Anyway, it turned out that my fellow partial-lockdown-escapee was an arborist. A tree surgeon to you. Not just locally but along the line, we know that some firms have taken Thursons Shilling and are working for HS2 Ltd, whilst others even knowing that the work is a veritable pot of gold, have said no. Whilst this bloke was what we would call one of the goodies – or at least said he was – he knew plenty of the baddies too.

With apologies for the langauge but does anyone think diff.

Obviously he told the constant anecdote that we have heard not just in pubs up and down the route, but in conversations with some of the more reasonable people who happen to be working for HS2 contractors, that the firms who are trebling what would be their normal prices for HS2 work are seen as undercharging. But there were a couple of specific issues which sadly follow HS2 logic and tell that oft-repeated tale of HS2, wasting taxpayers money, causing more environmental damage than necessary, and of course running that gravy train for all concerned.

One thing that has been really clear over the last few months is that HS2 Ltd seem to be taking down more trees than they need. That there are ones coming down that are outside the Act Limits and the swathes coming down for the track are far wider than they were meant to be.

“Ah well, if say the contractors are meant to cut down to a clearance of 5, 10, 30 metres, whatever, if they don’t do that and they have to come back, they don’t get paid for that. And how far they go out is left up to them it’s not marked up in advance, so if there are trees they reckon are on the edge or just beyond the edge and especially any that might be overhanging, then they take them down.”

‘Right, yeah, so they are taking more trees down than they need to because if they don’t cut enough down, it’ll cost them to come back.”

“Yeah. And of course that they get to keep the woodchip, so it’s in their interests.”

“HS2 let the contractors keep the woodchip and they sell it on as biomass.”

But suddenly a penny that had been hanging in the air for two years finally dropped. HS2 Ltd have always seemed to have had a constant obsession with putting every single twig, hedge and trunk through an industrial woodchipper where it fell. Since the very first time this had happened was at the fenced off and injuncted Newyears Covert on the Harvil Road in Harefield, when about 6000 trees had been taken down in nesting season, we had always thought that the reason for this was to shred any evidence of any wildlife crimes and to create a sterile zone by destroying every living thing bigger than a microbe.

But no, there is a massive financial incentive for chipping the wood and taking more than necessary too. It’s so obvious, but we just hadn’t seen it. When I first saw the magnificent oaks of the Welsh Road going into the woodchipper I couldn’t understand it. I’d just seen it as a waste, thinking that surely Oak Furniture World or someone like that would have had their arms off for specimens like that. 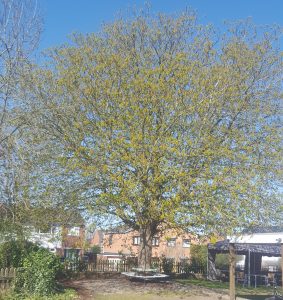 If a tree this size is worth anything between £150 and £300 as woodchip, how much are the ancient oaks HS2 is chopping down being sold to power stations for?

“Maybe a few years ago that’s what would have been happening, but the price of woodchip for biomass has really gone up in the last few years and HS2 is driving that.”

“So how much you reckon for that tree?” I asked, pointing at a Horse Chestnut, which having been planted at the same time as the pub was is about 55 years old

“Well, you’ve got certain types of woodchipper, the basic ones we have you can sell the woodchip at about £15 per ton, but if we took that down, we’d leave most of it as logs. The really fancy ones for the big stuff will churn it out at a grade and a uniform size which is very easy to sell for the higher prices. When you get the bigger machines the woodchip is anything between £25 and £50 per ton, depending on the grade, so that tree we’ll say would be £150, but one that size could be up to £300. Some of these oaks will be worth thousands. Once you get to that big stuff and there’s a lot of it, it’s turned what were half a million pound businesses into multi-million pound businesses overnight. They are going ahead and buying the biggest kit possible, knowing that within a year they’ll have made their money back twice, selling all the woodchip as biomass for power stations, so it’s massively in their interest to cut down as many trees as possible.”.

At the same time as me writing this HS2 Ltd were doing something they really don’t like to do, answer a Freedom of Information Act request, and it just so happened that it was an FOI on this very subject! So thank you very much Sarah White for planning ahead and getting the answer perfectly on time for this article which shows anything up to 63% of HS2 woodchip is going for biomass. Officially, 5% of the woodchip is “Category U” and is going for biomass, but 58% is rated as “Category C”, specified by HS2 Ltd as “not suitable for widescale reuse, to seek third party off-takers or chip for biomass” – where “reuse” is for use in playgrounds, herbaceous borders and the like. Who determines if it’s not suitable and who takes it away or chips it for biomass? Well, you’ve read up until this point, haven’t you……?

If you are expecting that HS2 Ltd might update the carbon case for the project to include the fact that ancient woodlands are being repurposed as whole-tree-biomass, which studies have shown is worse for the environment than burning coal, I wouldn’t hold your breath.