HS2 won’t help with modal shift or reducing the amount of freight on the roads.

Building HS2 has never been an alternative to expanding airport capacity.  We’ve not said much about modal shift recently , because HS2 Ltd haven’t been publishing the figures they are using – the latest were from 2013, which showed a somewhat meagre 1% of HS2 passengers would use HS2 instead of flying.

A recent written answer shows that nothing has changed.  Cheryl Gillan, MP for Amersham, asked when the the Dapartment for Transport had last revised the figures for modal shift and was told that HS2 “regularly review assumptions“.  She was referred to the 2013 economic case for HS2, and told “proportion of HS2 demand predicted to have switched from air and car has not materially changed since the 2013 publication“.

And as we said above there is a meagre 1% predicted to shift from air:

While high speed rail is often seen as an alternative to air travel, in reality this was never part of the goal for HS2.  The scheme was set up by Andrew Adonis, who also favoured expansion of airports such as Heathrow.  Decisions were made early on that meant it would never be an alternative to flying: for example it was designed without a link to HS1 or too Heathrow.

This was reflected in the modal shift figures,  When the details of HS2 was first published in 2010, modal shift from air and car combined maxed out at 16%, but each year this dropped to 5% in 2013 and as we said above is now just 1% with air and a paltry 4% from car.  In fact, as the table below shows, its always been expected that more new journeys -currently five times more new journeys – would be undertaken just because HS2 was built, than would shift from non-rail modes of transport.

Design decisions, such as the decision to terminate HS2 at Euston rather than connecting to HS1, means that the dream of getting on a train at Manchester and getting off in Paris simply won’t happen: nor would you be able to go Birmingham to Lille, or let’s face it any of the other places in Europe or across Asia.

Similarly, there is no Heathrow station: but there are proposed stations near Manchester and Birmingham airports. Most crucially, airports are actively lobbying for HS2 to be built with the chief executives of Manchester Airports Group, Birmingham Airport, Leeds Bradford Airport and the Managing Director of East Midlands Airport all recently signing a letter calling for HS2 to be built. They would hardly do this if they thought HS2 could ever lead to a reduction in aviation. 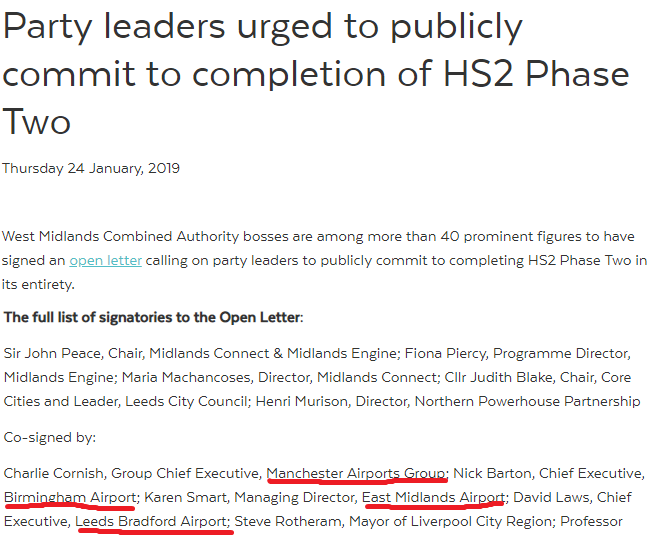 Update: As if to prove our point, on Thursday the New Civil Engineer reports that Andy Burnham, Mayor of Manchester, said that the government should scrap Heathrow because HS2 can act as a catalyst for increasing capacity at both Birmingham and Manchester airports, replacing the need for a third runway at Heathrow.

A question of freight

Another idea currently circulating is that building HS2 will mean more space on the railways for freight – but this is a lazy argument, made by people who don’t understand how the railways work.

HS2 itself is not designed for freight: it is designed only for fast passenger services.

What’s more, it won’t make space on existing railways for freight trains, and may even make freight slower and less attractive. Where existing railways are two tracks, freight trains already have to move out of the way and wait to let fast passenger trains through. On those parts of the railway that HS2 classic compatible trains will use, this will just add to the numbers of fast trains making the situation a lot worse for freight.

The south end of the West Coast Main Line (WCML) up to Rugby is a four track railway, with a pair of “fast lines”, used by fast passenger trains, and a pair of “slow lines” used by stopping and semi-fast passenger services and freight. Even after HS2 opens there will still be fast passenger services on the WCML, providing trains to Milton Keynes and Northampton, and InterCity services to places such as Coventry, Wolverhampton, Nuneaton, Tamworth, Lichfield, Stoke-on-Trent, Chester and North Wales. These will be spread across the hour in each direction to give Milton Keynes a fifteen minute frequency – and there are therefore still too many fast services to allow freight trains on to the fast lines. Freight will still have to use the slow line: the motorway analogy is that HGVs are not permitted in the fast lane.

In addition, HS2 doesn’t go to the places freight trains are needed: it won’t relieve railways to ports like Liverpool, Southampton and Ipswich.