The Woodland Trust joined calls to stop the advance site clearance for HS2 until the project receives ‘Notice to Proceed’, fearing that the project could be cancelled after irreplaceable ancient woodlands have been destroyed.

This comes a week after three district and county councils, along with 41 town and parish councils demanded that all enabling works should stop immediately, and the same week as Stop HS2 launched a new petition for all work to stop immediately. The reason for a renewal of calls to stop work now before any more damage is done, centres around the fact that the decision on whether the HS2 project will get Notice to Proceed, which was meant to happen in November 2018, has been delayed again, this time to December 2019 at least.

“We fully understand the concerns of the councils as they mirror our own in respect of the ancient woodland due to be cleared later this year. While the enabling works are legal we question whether they are right given the project is under review.”

“If huge swathes of ancient woodland are destroyed and HS2 is then scrapped then we will have lost a rare, irreplaceable habitat for nothing. The loss of these centuries-old sites will be catastrophic for the environment. Not only will we lose the woods but the many species of flora and fauna which rely on it for survival are at risk too. Rare birds such as the lesser spotted woodpecker, the willow tit and the wood warbler, bats, butterflies, dormice, badgers and hedgehogs are all threatened.”

“The government needs to ask itself if it is prepared to allow such significant environmental destruction before the outcome of the review is known. The fact we are losing ancient woodland at all is terrible. To lose it needlessly would be a travesty.”

Whilst some site clearance has been undertaken in a number of areas, ancient woodland which is our rarest habitat accounting for just two per cent of woodland cover in the UK, is earmarked for destruction in October, two months before a decision on the final approval of the project is due to be made. The Woodland Trust has stated consistently that due to the fact ancient woodland has laid undisturbed for centuries, it is an irreplaceable eco-system in its own right and no amount of new planting could ever make up for that loss. 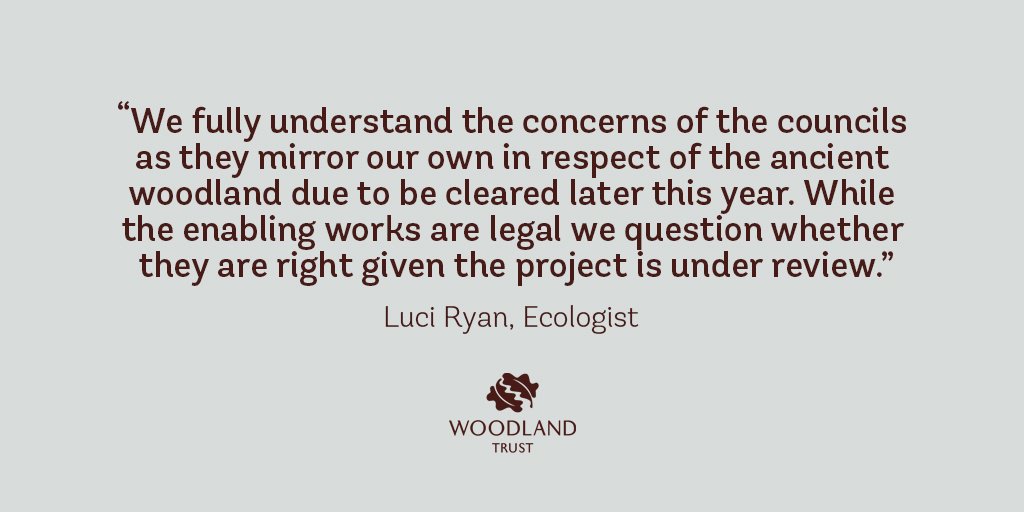 The 149-mile route from London to Birmingham will cause loss or damage to a total of 61 ancient woods. Of those 32 will suffer direct loss totaling 31.09ha. The other 29 will suffer damage due to noise, vibration, changes to lighting and dust. It is proposed that over 100 ancient woods would suffer loss or damage across all proposed phases of HS2.

As getting Notice to Proceed has now been delayed for over a year, and there is no guarantee the project will ever get final approval, there have been a series of increasing calls to stop all current work of the project, including a new petition from Stop HS2, titled “With ‘notice to proceed’ delayed again, halt all HS2 enabling work immediately”.

The petition goes on to state:

“Because HS2 is an unjustifiable project, with terrible management that has not been subject to enough scrutiny, it will not face ‘notice to proceed’ tests before December. Consequently, HS2 Ltd must be stopped from trying to make it harder to cancel HS2 by maximising expenditure and destruction now.”

“Whilst supporters of HS2 pretend construction has started, the DfT has confirmed that only the highly destructive enabling works are taking place, years behind schedule. Construction and the release of full funds cannot happen until HS2 Ltd gets notice to proceed, by passing “Management Capability, Affordability of Contracts & Robustness of Revised Business Case” tests. If it is tested impartially on these bases, I believe it will fail all of them and be cancelled, so they should stop causing damage now.”

Over 5000 people signed the petition in less than four days since it was published, and you can add you signature here. 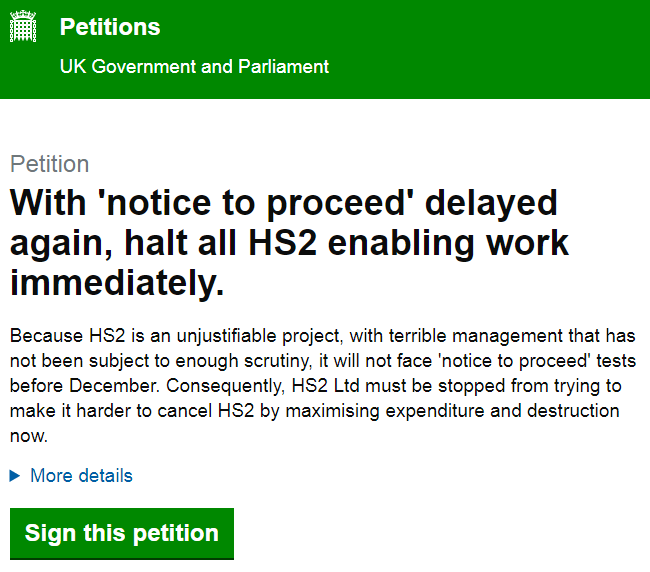