Back in the day, one of the big reasons for going ahead with HS2 was the supposed fact that it was going to be a green solution and that it would contribute to a reduction in the UKs carbon footprint, in line with the Kyoto Protocol and the 2008 Climate Change Act.

So high up the agenda was that if you read the 2010 Conservative/Liberal-Democrat Coalition Agreement, you might even be excused for believing HS2 was being proposed purely to combat climate change, as the only justification of HS2 was “We will establish a high speed rail network as part of our programme of measures to fulfil our joint ambitions for creating a low carbon economy.”, and Labour’s Lord Adonis who set up HS2 Ltd claimed that “Virtually the whole of the developed world is now going ahead with high speed rail because it’s the green solution to providing fast, high capacity connections between cities.”

The thing is that even back in 2010 this whole concept was being proven as spurious, when just two months after HS2 was announced, George Monbiot pointed out that claims were being made without the facts to back them up:

“Of the passengers expected to use the new railway, 57% would otherwise have travelled by conventional train, 27% wouldn’t have travelled at all, 8% would have gone by car and 8% by air. In other words, 92% of its customers are expected to switch to high-speed rail from less polluting alternatives. Yet the same report contains a table suggesting that the savings from flights not taken outweigh the entire carbon costs of the railway. It provides neither source nor justification.”

Since then the modal shift figures have dropped and dropped, until HS2 Ltd gave up reassessing them in October 2013 when they hit rock bottom, as they realised only 1% of HS2 passengers would be expected to transfer from flights. But back in 2010, the issue of taking flights out of the air was a big driver for HS2, with the All-Party Parliamentary Group for High Speed Rail being founded originally by MPs opposed to a third runway at Heathrow. The idea was that high speed rail might be an alternative to a third runway, as it could link up airports and the Channel Tunnel. This was supposedly going to mean there would be a reduction in internal flights. Not only was that concept spurious due to the low number of flights between the possible destinations of HS2, but any removal of internal flights would surely have seen those slots replaced with services flying to more far flung destinations, increasing carbon emissions.

Despite all that, when it came to it HS2 was designed without connections to either Heathrow or HS1. These links were added to HS2 on paper for a while (without the associated increase in cost), with the link to HS1 surviving as far as the initial drafting of legislation in 2013. Both have long since been dropped, though you will still find the odd MP who still thinks HS2 trains will go direct to Europe. It is important to note that while some saw HS2 as an alternative to a third runway at Heathrow, it was never meant to be an alternative to the expansion of aviation. HS2 was – and still is – meant to drive the expansion of airports by making them more accessible and connecting them together. As recently as January 2019, Leeds/Bradford, East Midlands, Manchester and Birmingham Airports were publicly lobbying for HS2 to be built, something they would hardly want if it was going to lead to a decrease in aviation.

Whilst under current plans, only Birmingham and Manchester Airports are due to get stations – and Manchester seemingly only if they pay for it – it is also worthy of note that those HS2 stations are on opposite sides of the M42 and M56 respectively, surely a deliberate choice to open up land to be developed into dormitory towns for commuters, exactly like what is now happening with Ebbsfleet.

By 2011, the then Transport Secretary Justine Greening had dropped the line that HS2 would be this massively environmentally advantageous project, and instead opted for saying it would be ‘broadly carbon neutral’.  This was a massively misleading line from the Minister who also said that ancient woodlands threatened by HS2 could simply be moved, as that only considered the operation of the line, not the carbon impacts of actually building it.

Since then reports from HS2 Ltd on carbon have got more and more convoluted and less and less clear.

The most recent, published last month, is damning for any HS2 carbon credentials.

At last HS2 Ltd decided to come clean and admit that even after 120 years, HS2 will produce a net increase in greenhouse gas emissions just in terms of operation, ignoring any carbon cost of building it. Even taking into account the carbon offset of 120 years of replacement woodland (174,000 tCO2e) soaking up CO2, HS2 still ends up being a net carbon contributor. After 120 years, the operation of HS2 is predicted to create 315,000 tonnes of CO2e, against only 307,000 tCO2e tonnes of benefits (although as many schoolkids taking part in the current Climate Strike protests are trying to point out, if we carry on like this, we might not have 120 years).

Add in the massive 1,451,000 tCO2e tonnes of embedded carbon associated with the construction that is due to take place over the next 15 years, and you are presented with the very clear fact that going ahead with HS2 right now is completely irresponsible in environmental terms.

And it’s actually worse than that, because it is clear that as always happens with HS2, these figures have been fiddled, and they’re not trying to hide it, it’s depressingly obvious.  Although the figures for projected modal shift have changed since 2010, George Monbiot was quite right to point out that passengers transferring onto HS2 from existing electrified services would be transferring from less polluting alternatives. The reason for this is quite simple, more speed requires more power. And it’s not a linear relationship, power requirements exponentially increase with speed, which is why HS2 has such a high carbon footprint. The most recent estimates were that HS2 would require about two thirds of the electricity the current rail network currently uses, or in other terms 1% of the entire output of the grid. 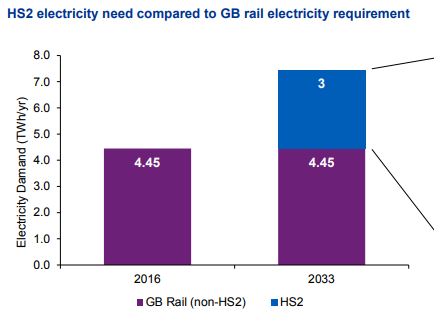 Typical of the way that HS2 Ltd fiddle figures as a matter of course, this time to try and make their carbon impacts look good, they have decided to rewrite the laws of physics. HS2 Ltd somehow have decided that HS2 would emit 10 tCO2e per passenger kilometre (up from 8 in 2017), opposed to the 22 tCO2e per passenger kilometre that the slower intercity trains would emit. To even have the first chance of getting to such figures, you either have to assume that HS2 trains are over twice as energy efficient as trains going around half the speed, assume that all HS2 trains are full whilst the slower ones are all more or less empty. It is a fundamental basic premise of HS2 that the need for whole scheme has been based on a grossly inflated passenger forecast. This also has the added benefit of massaging the carbon figures, because how that maths works means that if you were to say you will carry twelvety gazzillion passengers for half a dozen parsecs every day, then your carbon impact comes out at zero squared.

Another way of fiddling the comparative carbon figures which seems to have happened is to assume that there will still be some inter-city diesel trains operating on existing lines halfway into the 22nd century.  They also assume that inter urban cars will emit 67 tCO2e per passenger kilometre, despite the clear shift to electric vehicles which will of course have their power generated from the same mix as electric trains. It is quite simply an undeniable fact that unless all electricity is renewable forever, an electric train travelling at 125mph like current ones do will have a lower carbon impact than an electric train travelling at 225mph, as HS2 propose to.

How they have done all this is by picking a figure for carbon emissions that each mode of other transport will have in the year 2030, and deciding it will stay that way for over a century. According to HS2 Ltd, every other method of travel that people will be shifting from will be more polluting than HS2, and they’ve even added in the idea that more freight will run on other railways as a result of HS2, and they still can’t make it come out looking good. Another great example of HS2 fiddling the figures is although their 1% figure for the modal shift of getting plane passengers to use HS2 is pitiful, one of the HS2 documents admits that if any internal flight slots are cut as a result of HS2, they would be replaced by more-polluting long haul slots. However, while HS2 remove the carbon of the flights they think would be cut, they haven’t added in the additional carbon into their calculations, as it is “beyond their control”.

With all this in mind the likelihood is, as it has always been, that HS2 will lead to a much larger increase in carbon emissions than is being admitted.

The fundamental point is that if you want to decrease carbon emissions, you have to oppose HS2.