After you’ve read this article, please consider donating to the Crowd Justice Appeal.

Today, protesters have attempted to stop HS2 Ltd from drilling boreholes through a contaminated landfill site into a chalk aquifer which supplies drinking water to London. Police have confirmed that they have made two arrests. One woman had been handcuffed to a digger, whilst another had been sat on top of it. 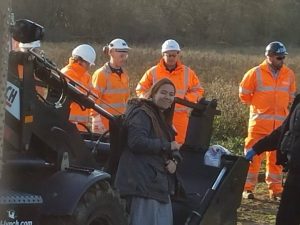 Chained to a digger at Harvil Road. Photo: Mark Keir

The protest has started next to the Harvil Road Protection Camp in Harefield, where HS2 Ltd are moving into a field next to Newyears Bourne, where work has begun to clear the land of habitats containing protected species.

Newyears Bourne is a polluted river known to contain 4 illegal pollutants due to former landfill operations, which are now buried under the adjacent Newyears Covert. There are 21 known water linkages leaving the landfill site including the bourne, with the pollutants illegal under the water frameworks directive. The landfill site was officially registered as contaminated in 2011, with the pollution of such severity that it led to the closure of the Ickenham water pumping station, as the water drawn from it was unfit for human consumption under the law.

With it being widely reported that the costs of HS2 civil engineering contracts are going over budget because HS2 Ltd have still not completed surveys of ground conditions, HS2 contractors are planning to use this field for piledriving tests, drilling into the chalk aquifer only now to find out if it could take the pressures of high speed trains running overhead. Protesters are concerned because this will require drilling through an area of known contamination, into an aquifer which supplies drinking water to London.

“It is absolutely incomprehensible that HS2 Ltd can be so cavalier as to drill through known contaminants, which have already caused illegal levels of pollution and closed down one water supply, down into an aquifer which supplies drinking water for London, with absolutely no assessment of what might happen. This is not only dangerous, this is potentially a criminal level of incompetence and negligence.”

“It is beyond belief that Government, the Environment Agency and Hillingdon Council are allowing this to happen. Given a deplorable indifference to public health from the powers that be, it’s only right that members of the public try to prevent a disaster about to happen. They should be thanked for fulfilling such an important civic duty, one which has been abdicated by those in power.” 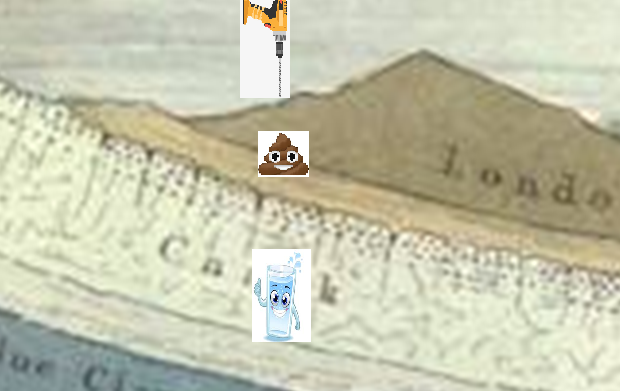 Just in case you don’t understand what HS2 Ltd are trying to do at Newyears Covert, here is a quick sketch to explain why it shouldn’t really be happening without any assessment whatsoever on the potential impact to Londons’ water supply, in a way that even the people at HS2 Ltd should be able to understand.

In another development that underlines the lack of understanding of water resources at HS2 Ltd after a decade of planning, former Chiltern District councillor Seb Berry claimed that HS2 Ltd contacted him today to ask him where a river was……

Phone call from nice info officer at @HS2Ltd. She’d been asked to ask me “where exactly is the chalk stream” in Great Missenden. Seriously. I’ve never written this on Twitter but FFS. HS2 Ltd are utterly useless. #Chilterns #AONB