This was first published on HS2 Buzz.

It’s March 2010 and the Labour party strategic planning committee know Labour are facing defeat to the Tories in under two months. HS2 Buzz imagines the scenario in this tongue in cheek sketch. 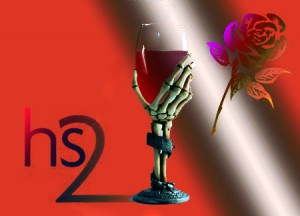 Chair: Has anyone had any thoughts on how best we can stuff up Cameron’s government?

Chancellor: We’ve spent all the country’s money already, so whatever happens they’re doomed.

Chair: True… but I think we should look longer term, we need something to knock the bloody smirk off their faces and keep it off.

Transport Secretary: I’ve been mulling this one over and think I have the perfect white elephant project. We still owe the buggers for saddling us with the bloody Dome.

Chair: We are listening… go on…

Transport Secretary: What about building a high speed railway right through the Chilterns AONB? If we picked the route carefully we could make sure it screws up their support in The Shires.

Chancellor: I like the sound of it, but the country is damned near bankrupt, something like that could cost 150 billion before it is finished surely?

Transport Secretary: Possibly, but wouldn’t it slap the Shire Tories in the kisser?

Chair: Britain is such a small country, they would never fall for it, even ‘flat out’ you’d only save about fifteen minutes getting to London from the Midlands.

Transport Secretary: That’s the thing, we could say it would benefit the north, play upon the north/south divide, you know… make it a class issue… us versus the toffs and crap like that.

Chancellor: They would probably suggest it followed the M40 corridor so as to minimise the destruction of the countryside. There would have to be a few options, what if they didn’t bite?

Transport Secretary: We’d say they were just protecting their voters at the expense of the taxpayer, going the long way round so as not to lose votes.

Chair: Are they daft enough to accept a route through the Chilterns AONB when they could go a less contentious route?

Chancellor: Some of their biggest friends would love to concrete over the place, they’d stand to make fortunes and even the Shire Tories won’t trump money and influence.

Chair: You’re right, all politicians retire eventually and if we want to spend our twilight years ‘in clover’ we have to make plans early don’t we?

Transport Secretary: Fine, we are agreed then. I will get things going ‘as soon as’, we don’t have long to get this project on the road.

Press Secretary: If this is going to work, we have to look as if we are really sold on it. Once the stuff hits the fan, we start talking to the press, ‘go cold’ on the project, suggest the cost is too great and that it’s already wasted too much money.

Chair: Brilliant! And if we start by wanting a route through the middle of the Chilterns, let them choose the M40. Nobody is going to want to put a route too close to the Rosthchilds, so we can rule that out. If the Tories change their mind under pressure to look unbiased, we’ll choose the M40 and leave them right in it.