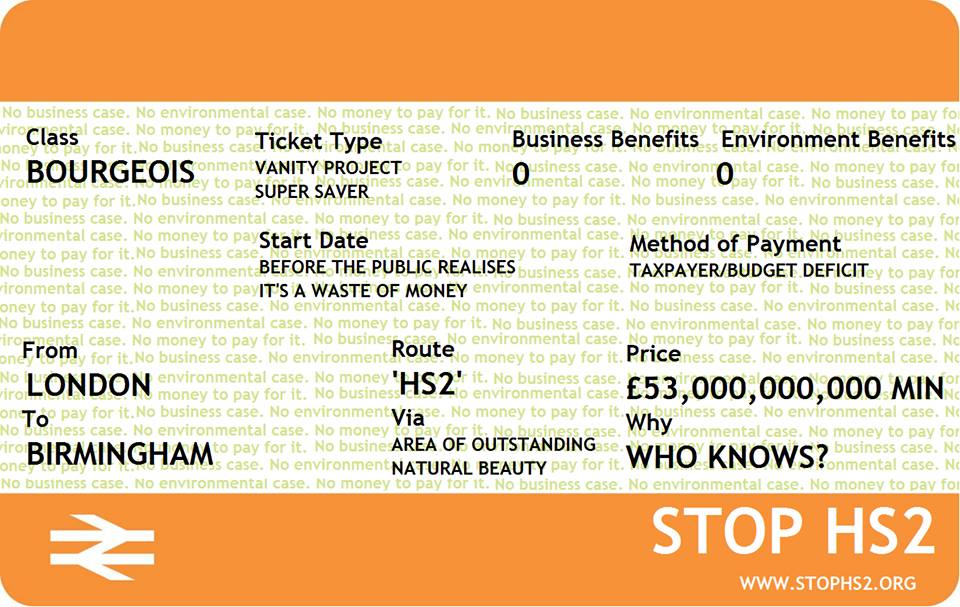 The price ticket of HS2

35 MPs, the majority of whom are not from constituencies affected by the proposed route of HS2, have signed a motion calling for the HS2 Preparation Bill, which calls for a blank cheque to pay for consultants developing the project, to be scrapped before it is due to be debated tomorrow (26th June 2013). The motion, signed by politicians from four parties reads: “This House declines to give a second reading to a Bill which authorises preparatory expenditure on a railway without specifying further detail of the route and a limit on expenditure.”

With several MPs who have expressed long-standing opposition to the project having not yet signed, it is expected that the rebellion against the party whips will increase when the vote happens. Government ministers affected by the route such as Jeremy Wright and David Liddington have conveniently found other things to be doing, so as to avoid having to take part in a vote which would demonstrate if they value their constituents their or careers the most.

“George Osborne will try and say tomorrow that we need infrastructure investments and therefore it follows that because HS2 is an infrastructure investment, we need HS2. This overly simplistic argument is now the only thing Government has got left to tout this boondoggle with because every other argument: that’s it’s needed for capacity, that it’s got green credentials, that it’ll be a magic wand to cure the north-south divide, that it’s got a good business case, or that other countries are doing it have been knocked down. Every one of the stock arguments for HS2 has been knocked down, and all they have left is to stamp their feet and say ‘We want our train set.’”

“To sign off a blank cheque on a project with little justification, and independent body after independent body delivering scathing assessments is simply irresponsible, and flies in the face of everything else that is being said about needing to tighten belts and be responsible with taxpayers money. Next month, the Public Accounts Committee will surely tear apart the case for HS2 (July 1st), the details of the Amber-Red assessments will have to be made public following a ruling from the Information Commissioner, and the rulings of legal appeals will be out. The Government simply wants to get a quick vote through before any of that happens.”

“For some time now, Members of Parliament have been voicing their opposition to HS2 behind closed doors. Now, they are becoming more vocal and more obvious. With MPs with constituencies from the South Coast, Wales, East Anglia and beyond signing up to this motion opposing the Blank Cheque Bill, it’s clear that opposition to HS2 comes from all round the country and all political viewpoints.”

“We urge all MPs to look closely at the HS2 proposal, to look at the blank cheque they are being asked to sign and to show the Government that they don’t want the country towaste any more money on HS2.”

The MPs who have signed the motion currently are;