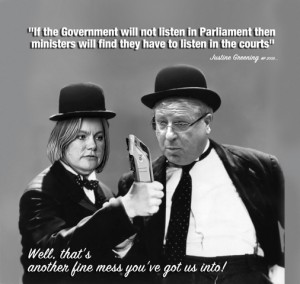 The results of the Judicial Reviews into the legality of the Governments plans for HS2 are expected to be handed down at the Royal Courts of Justice on Friday 15th March from 10.30. In December 2012, five comprehensive cases were heard by Lord Justice Ouseley, questioning the legality of a host of issues including; an inadequate consultation including the failure to provide accurate information, failure to comply to environmental statute, failure to assess the impact on communities, failure to adequately assess alternatives, failure to consider the impact of HS2 on other parts of the transport infrastructure, the chosen route including changing parts of the route post-consultation, and that the decision on compensation failed to meet Government promises and relied on undisclosed information.
One of the key points of the challenge against the 2011 consultation was that people living on Stage 2 of the proposed project had been completely disenfranchised, because they would not be consulted on the principle of HS2, simply on the chosen route and compensation options. Environmentally, the case against HS2 was based on the contention that the Government had acted unlawfully by not complying with the legal requirements of the Habitats Directive, the Strategic Environmental Assessment regulations and the Aarhus Convention.

On behalf of the Government, the best defence Tim Mould QC could come up with was that the Secretary of State had ‘not made a decision to proceed with the HS2 rail scheme’ as it was still ‘only a policy’, despite the fact there was constant reference in court to the Governments ‘decisions document’. This concept has surely been further undermined by the publication of the Stage 2 route, and the announcement by Secretary of State for Transport Patrick McLoughlin to introduce a ‘Paving Bill’ this year, which will release more funds for the project on top of an amount in excess of a quarter of a billion pounds, which has already been spent on HS2.

Other revelations during the nine days in court last December included the fact that the spur route to Heathrow Airport, which has since been dropped would throw away 70p for each pound of taxpayers money spent on it, and that in peaks evening hours, trains out of Euston were only 52.2% full in 2011, a drop of 2% from 2008.

If the Government were to lose the Judicial Reviews and not to appeal, the HS2 project might be set back by several years, during which time campaigners hope objective reassessments would be made, and rail investment alternatives would be implemented instead.

Stop HS2 chair, Penny Gaines said;
“We are very glad to hear that the judge will making an announcement on the judicial reviews. It’s clear there have been fundamental mistakes in the process so far. These include losing over 1000 consultation responses, including the Stop HS2 campaign manager’s personal response. This bungled handling has continued with the Government deciding to change which Acts of Parliament they want to use with the sudden consideration of a Paving Bill, to get more money from the taxpayer for this unnecessary white elephant. Not only do they want more money from the taxpayer, but just recently we’ve been hearing about secret meetings to reduce fundamental parts of the plan, such as the necessary works at Euston. It’s time Patrick McLoughlin faced facts and cancelled HS2 in its entirety.”

Joe Rukin, Stop HS2 Campaign Manager said,
“We were absolutely amazed by the sheer arrogance of Government when they announced Stage 2 of HS2 five weeks ago, before the ruling on whether they had acted legally so far on Stage 1. Coalition leaders have shined a spotlight on HS2 and walked into it, wanting to be associated with the project, but come next week they could find that they have linked themselves to an illegal project which everyone will see is being based on nothing more than sentiment and spin.”

“In December there were five very detailed cases put against HS2, which when all combined together show quite starkly that the Government has rushed HS2 through and not only ignored any objections or suggestions which could make the scheme better, but they also seem to have ignored the principle of fairness and their legal obligations. After sitting through the cases, I can see why David Cameron wants his infrastructure projects to be above the law, it’s because they want to rush them through with utter contempt for the law. Well now the law will have it’s say and we look forward to it.”

Our report following the end of the hearings in December can be found via this link.