The five Judicial Reviews being held into HS2 have concluded today (13th December) after a nine-day hearing, two days longer than what initially planned. On the final day, Tim Mould QC acting for the Department for Transport,  stated that was a difference in the Governments and campaigners view of compensation, claiming the Secretary of State wanted ‘fair’ compensation, whilst campaigners wanted ‘full’ compensation, a technical difference which may be lost on many of the estimated 172,000 households blighted by HS2.

Despite admitting a 34-page response from HS2 Action Alliance to the main consultation was lost by the DfT, Mr Mould stated “HS2AA said all they wanted in their 34-page response to the consultation, which was reflected by the Governments response.”, as it was claimed in court that the minister was briefed regarding that response, despite no evidence being submitted to the court to support that claim. There was laughter in court as Mr Mould was forced to admit that documents concerning the analysis of the consultation were ‘confusing’.

Mr Mould was responding to the final evidence given yesterday from HS2 Action Alliance on the compensation scheme. Yesterday David Wolfe QC had argued for HS2AA that the two consultations on compensation so far (a third one is currently underway) went against the principle of general fairness and that not enough information had been provided saying; “Consultees were given insufficient information for the consultation to be fair and lawful.”

Mr Wolfe pointed out that the Government had lost consultation responses from HS2AA in both consultations, and the assurances of previous Secretary of State Philip Hammond. Mr Hammond had said that “We will go further than other compensation schemes, because individuals who suffer serious financial loss for a project in the national interest should be compensated.”, while Mr Wolfe argued that only a subset of those experiencing loss are proposed to be compensated by Government. He also pointed to official HS2 Ltd documents not showing any detailed reasoning for ruling out the ‘Property Bond’ scheme saying; “We are told ministerial briefings didn’t contain more information than the published documents, but this is the best you get with the published documents.”

Over the two weeks, the case against HS2 had been put strongly and there have been new revelations. Prior to the case, the Government had refused to release the actual passenger numbers on the West Coast Mainline, which could have shown if HS2 was needed and if alternative proposals would work, claiming the figures were commercially confidential. However, their legal team caved in at the last minute, possibly after Keith Kondakor, a Green Party Councillor from Nuneaton contacted Stop HS2 following the tweeting of this article, saying there was a legal precedent for the release of the data, as he had had a successful freedom of information request for the same information granted in 2009. 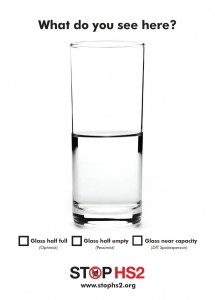 An illustration of DafT thinking

The figures themselves showed that at peak times in the evening in 2011, before extra carriages were added, trains leaving Euston were only 52.2% occupied, 2% less crowded than in 2008. Acting for the Department for Transport, Tim Mould QC said another reason for not releasing the passenger figures during the HS2 consultation was that it would ‘confuse the public’. Given that the DfT had been saying that the trains are near capacity and that HS2 was the only way of tackling the ‘capacity timebomb’ on the West Coast Mainline, when the reality is that peak hour trains are half empty and usage is dropping, he is possibly right in his assertion that telling people all of this would confuse them.

The big revelation on day two, thanks to an internal memo from HS2 Ltd CEO Alison Munro which was released under disclosure, was that the proposed link from HS2 to Heathrow airport would have a benefit cost ratio (BCR) of 0.3:1, meaning that for every pound spent the country would only ever get 30p back, or in other words 70p would be thrown away in every pound. This was another case of the DfT being hoist by the words of former Minister Philip Hammond, who had told the Transport select Committee that the DfT would no longer even consider projects with a BCR less than 1:1. It also turned out that HS2 Ltd themselves only thought there would be 102 passengers on each train to Heathrow, with only 14% of those actually wanting to go to the airport itself.

On the Wednesday of the first week (day three), just as George Osborne was announcing in the Autumn Statement that the routes to Heathrow, Manchester and Leeds would now not be published until the new year, probably after the ruling on the judicial review (but forgetting to tell HS2 Ltd), Heathrow Hub put their case that it had been unfair not to consider their proposals for linking to Heathrow, but it would have been hard for HS2 Ltd to have considered their response to the consultation, as like the ones from HS2AA, it got lost.

Other big arguments at the start of the case such as; the fact HS2 would cause massive problems in Camden both in the dispersal of passengers at Euston and the disruption caused by trying to plonk a link with HS1 on the busy (and too small) North London Line; the fact HS2 had included all the benefits accrued from going to Leeds and Manchester without looking at any of the disbenefits or even producing a route; the irrationality of the decision to proceed with HS2; the failure to comply with the Strategic Environmental Assessment regulations, the Aarhus Convention or the Habitats Directive, were all dismissed by Mr Mould who most bizarrely consistently tried to claim that no decisions regarding HS2 have been made.

Instead, Mr Mould went in to claim that all that has gone before regarding HS2 has no legal implications whatsoever and is merely a statement of policy. The most amazingly baffling part of this was that he kept referring to the ‘decisions document’ to support his claim that no decision has yet been made. It was his contention that; “The decision document is a political document outlining a political case to a political problem to Parliament and the public at large.”, despite the fact that as a direct result of the ‘decisions document’, HS2 Ltd have taken on more staff, contracts worth hundreds of millions have been signed by HS2 Ltd and there is currently an ongoing consultation which will result in legally safeguarding the land to be used in construction.

Nathalie Lieven, QC for the 51m alliance of councils along the route argued;

“Mr Mould indicated that the decision document is not a ‘decision’ in quotation marks; it is a policy document. This is not a statement of policy, it is a decision to apply for the necessary powers, including development consent for HS2, through the process of the Secretary of State promoting two hybrid bills. To say the decision document is a policy directive flies in the face of reality.”

The fourth case was brought by Aylesbury Park Golf Club, whose representative David Fletcher on Tuesday 11th (day seven) said that the basic rules of fairness were violated, when they were not even told that the proposed route had been changed to take it through the middle of its course, obliterating 12 of its 18 holes, and that 769 alternative route suggestions had been ignored by HS2 Ltd.

Lord Justice Ouseley is likely to give his decision regarding legal challenges early in 2013, and some councils in 51m have already started discussing funding an appeal, as it is likely that whichever side loses there will be an appeal.

“There have been very detailed cases put against HS2, which when all combined together show quite starkly that the Government has rushed HS2 through and not only ignored any objections or suggestions which could make the scheme better, but they also seem to have ignored the principle of fairness and their legal obligations. About a month ago, David Cameron announced that he wanted to cut the access of the public to Judicial Reviews, to water down our ability to hold the Government to account when we think they have acted illegally. After sitting through the cases, I can see why he wants his infrastructure projects to be above the law, it’s because they want to rush them through with utter contempt for the law.”

“We are sad that it has had to come to this, we just wish the Government would have listened to us beforehand, but they have been completely intransigent and unwilling to hear a single word. We now have to go away and enjoy Christmas and pray that the new year brings new hope.”