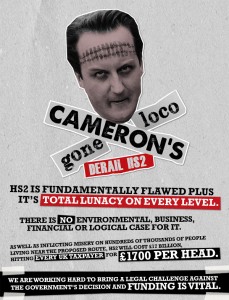 Does he even realise he is contradicting himself?

David Cameron proved he has totally lost the plot yesterday, saying in a speech in Keighley that there was ‘no magic money tree’, but that he would fight for HS2. This was on the same day that it was revealed that the planned HS2 development at Euston station may be downscaled as the budget has been underestimated by 30-40%, and the same week that it was revealed that HS2 has already cost the taxpayer over a quarter of a billion. A ‘Paving Bill’ is now planned for HS2 to release more money for the project quicker.

After claiming that the magic money tree (quantitativus easingii) does not actually exist, the Prime Minister said;

“Some of the changes we need will have to be fought for. Housing and planning reform. The building of new roads, bypasses and HS2. These are fundamental changes that are essential for the future of our economy, but they are not, and will not, be universally supported. Well, my message is simple, make no mistake, in this battle for the future of Britain I am prepared to roll up my sleeves and fight.”

His viewpoint was not universally accepted, with one audience member describing HS2 as a “Westminster village pipe-dream.”

If Mr Cameron really wants a fight, we are quite prepared to take this outside!