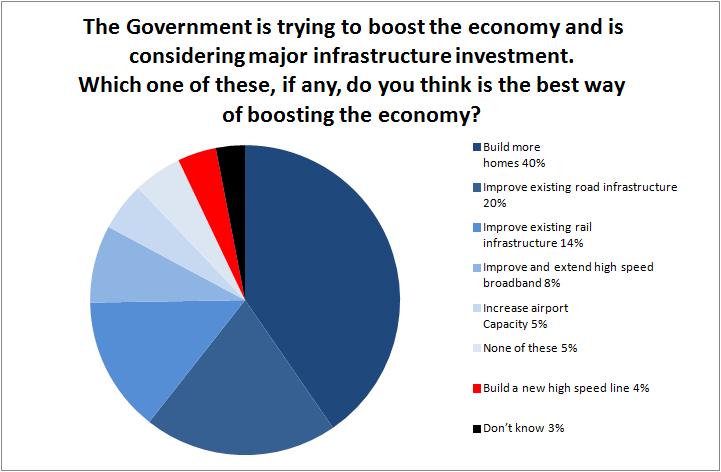 In a survey carried out by Ipsos MORI, only 4% thought a new high speed rail line was the best way of boosting the economy, just beating 'Don't Know'.

A new high speed line trails far behind building more homes (40%); improving existing road infrastructure (20%), and improving existing rail infrastructure (14%). Improving and extending high speed broadband is considered the best way to boost the economy by eight per cent of the public. Increasing airport capacity is favoured by five percent of those surveyed, equal with those that replied ‘none of these’. Three per cent of respondents do not know which infrastructure projects would boost the economy.

Respondents were asked; “The Government is trying to boost the economy and is considering major infrastructure investment.  Which one of these, if any, do you think is the best way of boosting the economy?”

“The results of this survey are no surprise to us. For three years, Governments have allowed themselves to be seduced by the idea of high-speed rail, as sold to them by lobbyists from vested interest groups. They have totally lost sight of what the public know is really needed to get Britain going again, which is not chucking billions into an unstrategic, unjustifiable, unenvironmental black hole vanity project which will only be any use to the richest in society. There is a massive opportunity cost in building HS2, that there will not be funding for more popular, more important projects as this survey has shown.”

“We’ve already seen with the West Coast franchise farce that the very figures the whole case for HS2 is based on can’t be trusted, and a couple of weeks ago the chair of HS1 said the UK doesn’t need HS2. When the person who is running HS1 can’t see the point of HS2, it really is well past time for the Government to think again. The whole problem with HS2 is it came from a starting point of ‘we need to do this’ without having any strategic thinking besides ‘it sounds like a good idea’ to arrive at the conclusion. As a result, all the arguments which are used to support the idea have had to be retrofitted after the decision to proceed, which is why none of them fit.”

Commenting on the survey’s findings, Hilary Wharf from HS2 Action Alliance who commissioned the survey, said;

“Costing a staggering £17 billion, Phase 1 of HS2 will support just 42,000 jobs and only 14,000 of these will be outside of the M25.  So we are not surprised that the public agree with us that HS2 is not the answer to boosting the economy.  It really is getting beyond a joke that the Government continues to spend millions of pounds a month pursuing a highly unpopular and utterly flawed project when for much less the capacity issues and economic regeneration could be more effectively addressed”

The full results of the survey are available on the Ipsos MORI website.

HS2 Action Alliance commissioned Ipsos MORI to include the question on a face to face CAPI (computer assisted personal interviewing) omnibus survey. Interviews were conducted with respondents in their homes.

1,442 face-to-face Interviews were carried out between 21st September and 8th October 2012.  Quotas were set and the resultant data was weighted to ensure a representative sample.  Respondents were asked: “The Government is trying to boost the economy and is considering major infrastructure investment.  Which one of these, if any, do you think is the best way of boosting the economy?”