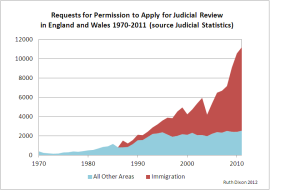 This graph shows a) The number of Judicial Reviews in recent years b) David Cameron doesn't have a clue what he is talking about.

In a speech to the CBI, Prime Minister David Cameron has called for cutting access to justice relating to planning, wanting to make it harder to apply for Judicial Reviews. The Prime Minister stated that there are around four times the number of reviews now, as there were ten years ago. In a fortnight (December 3rd) the hearing of five Judicial Reviews into HS2 will start place, just weeks after the threat of Judicial Review on the West Coast Mainline franchise saw the process collapse and the Government forced into a humiliating U-Turn.

Despite saying that the ‘growth industry’ in Judicial Reviews was holding back planning, the vast majority of the growth in Judicial Reviews is almost entirely to do with an increase in immigration and asylum cases. Once these are excluded, the underlying trend is flat. Additionally to this, if Mr Cameron wanted to ‘get more things built’, he would be increasing access to Judicial Review, as probably in part due to the prohibitive cost, the majority of planning related cases are in fact from developers taking planning authorities and inspectors to court, not from campaigners against development.

“Just weeks after the Government failed to get things right so spectacularly with the West Coast Mainline franchise, it’s is no real surprise that in true Scooby-Doo fashion they turn around and say ‘We’d have gotten away with it if it hadn’t been for that pesky Judicial Review.’ We feel it is hardly a coincidence that the Government is now talking about reducing their exposure to the laws of the land just a fortnight before the first tranche of Judicial Reviews into their half-baked HS2 plans are heard.”

“The Government seem to be making out that they believe any of their infrastructure plans should be above the law and do not realise that it is essential in a democratic society to be able to hold the Government to account. The more worrying thing is that the Prime Minister just wanted to make a speech that sounded good without having a clue what he is talking about. He talks about a growth industry in Judicial Reviews without realising that this is due to cases on immigration and that the majority of planning cases are actually taken by developers.”