Despite their complete incompetence so far in producing plans for HS2, the first environmental contract for the next stage of planning HS2 worth £7m, has been awarded to ARUP, who have had private meetings with David Cameron, Chesham & Amersham MP Cheryl Gillan and former Transport Secretary Philip Hammond. At a meeting in Buckingham in September 2010, Hammond stated that “Arup could not be considered to be acting with impartiality” after he had been told that senior officers of the company, along with Atkins, had told objectors that the proposals chosen by the DfT were not the best options for the Country.

ARUP of course have been raking in the cash since the original inception of HS2, having now designed three sets of plans for HS2 Ltd. The construction giant also sponsors both Birmingham and Solihull Chambers of Commerce, which have been lobbying heavily for HS2 to go ahead. Notable projects which ARUP have been involved with in the past include the Scottish Parliament building, which cost £414m after an original cost estimate of £10m and the Millennium Bridge which at £18.2m was only £2.2m over-budget but originally swayed when people walked on it due to ‘Synchronous Lateral Excitation’. The company is currently services engineer at the Shard Tower which was meant to have been completed for £350m, but current estimates suggest £450m.

The problem with continuing with ARUP is their complete and utter lack of attention to detail thus far. This can no better be demonstrated than the plans for HS2 passing Kenilworth shown on the current Map 23, published on 10th January 2012, which is littered with errors, contradictions and things which quite simply cannot be right.

The changes on Map 23 were something heralded as a success by HS2 Ltd, something which showed they had been listening when the tinkered route was announced last month, but nothing could be further from the truth. In the letter sent out throughout the country, along with the Chiltern tunnel which has gone down like a lead balloon, they proudly stated that they would no longer go through Kenilworth Golf Course, something which was considered at a recent meeting in Camden to be a slap in the face to the hundreds of social housing residents in Regents Park who would lose their homes.

On top of not going through the Golf Course, another proud change on Map 23 was that they would no longer go through the Grade 2 listed Dalehouse Farmhouse. Instead, the 350 year old building without foundations will now perch over the edge of a cutting, well within the required construction zone of HS2. It is highly unlikely that this now ‘saved’ building would withstand the HS2 construction process, let along the vibrations of a 225mph passing by every 90 seconds. At a meeting in Kenilworth this week, owner Naomi Tailby said that the Government had shown her “Absolutely no respect”, whilst County Councillor John Whitehouse said: “What HS2 Ltd are proposing now makes even less sense than it did before.” 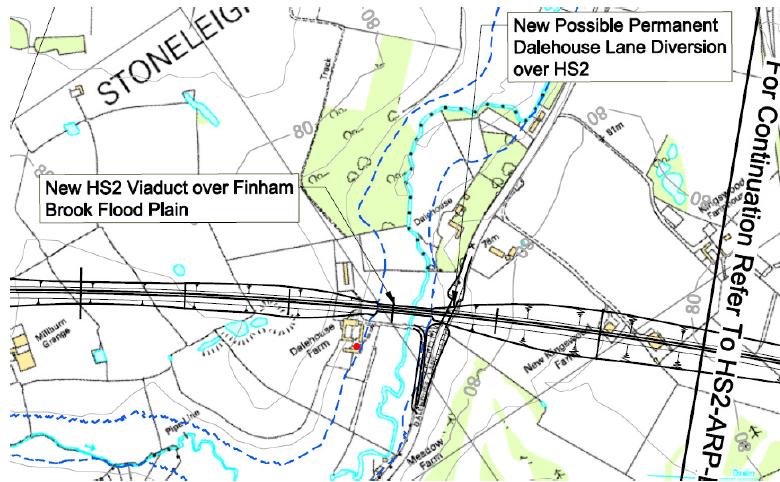 To miss Dalehouse Farmhouse and the Golf Club, HS2 will now go straight through both buildings of New Kingswood Farm, but the thing ARUP just don’t seem to be able to deal with properly is water. They have a long-standing history of this with regard to the Kenilworth area, as in 2007 they produced a flood risk assessment for the University of Warwick which missed a flood plain on their land south of Whitefield Coppice, which is shown on their HS2 maps.

However, they have now excelled in their incompetence failing to pay any attention to how you deal with water, a worrying sign from a company just awarded a £7m contract to provide ‘technical leadership and oversight of the Environmental Impact Assessments’. Next to Dalehouse Farm they now plan to cross the Finham Brook at flood level, but if that isn’t tricky enough, their plans for Canley Brook defy belief. The first point is a minor one, but underlines the complete lack of attention to detail we have come to expect from HS2 Ltd and ARUP. Next to the brook crossing, the map says in big letters ‘Crackley’, so despite HS2 being told for almost two years now that the brook is called Canley Brook, they remain adamant that it must be called Crackley Brook, because that’s what the area next to it is called, after all it says so in big letters. But looking at the bottom of the map which shows the elevation, the plan now is to cross the brook not a flood level, but at water level. While the thought of a 225mph train going through a ford might be spectacular, it hardly seems practical.

Section of Map 23, produced by ARUP showing their intention to create a new ford in Kenilworth, crossed by a 225mph train.