While the national media continue to be lazily content and seem to portray all opposition to HS2 as coming from The Chilterns, seemingly because they love the supposed intrigue of dissent within safe Conservative seats, the biggest losers -in terms of people losing their homes- if the project goes ahead will be Londoners, and this week has seen a lot of activity in the capital from Stop HS2 groups in the capital. 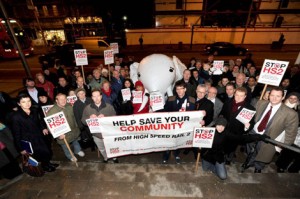 Things kicked off on Tuesday night, with a meeting at Ealing Council. Stop HS2 campaigners braved the cold and huddled round Ellie, the Stop HS2 mascot prior to the meeting which saw cross party consensus from Labour & Conservatives in opposing HS2. Councillor Bassam Mahfouz, who has the  transport and environment environment brief at the Town Hall said: “I believe this is above party politics. This is about people’s lives and people’s homes. We will not allow the Government to treat our residents like second-class citizens while they steamroller through this vanity project of theirs.”, but sadly his point was lost on Liberal Democrats who were roundly booed from the public gallery when they attempted to defend the project.

On Wednesday night, it was the turn of Camden, with another packed out meeting at a school on the Regents Park estate, where at least one block of social housing flats will be lost just north of Euston. In Camden the Council base their opposition on three principles: That HS2 is a vanity project which should not proceed, That if it does go ahead the London interchange should be at Old Oak Common and not Euston, and that the damage to Camden is simply unacceptable. It was revealed that HS2 Ltd Chief Executive Alison Munro had been asked to attend the meeting and not for the first time she had refused, the only difference being that this time there was not room to put her empty chair on the podium. She had also previously refused the invitation to have a walkabout in the Regents Park Estate to see the devastation HS2 would cause. Councillors also apologised that their website did not have any details of HS2 plans during the consultation, saying “HS2 Ltd simply didn’t give us any details, they just didn’t care.”

The chair of the meeting was keen to point out that he was sick of hearing about The Chilterns and highlighted the hypocrisy of Cheryl Gillan, saying “Last year she said HS2 was a Vanity Project and she would resign if it got the go ahead. Has she resigned? No, she’s flogged her house!” Labour MP Frank Dobson also attacked the media for labelling opponents ‘Nimbies’ – “For people around here, it’s not a case of not in my back yard, it’s a case of not through my front room!”

“It’s going to be on hell of a fight, but it is one we can win. I remember that the idea for the HS1 station was originally going to be a metal box under Kings Cross. That got as far as a hybrid bill before the Government sees sense. We need guarantees now that we will not lose social housing in the borough. If HS2 doesn’t go ahead it’ll be a waste of paper, but I’d rather see a waste of paper than a waste of billions on this project.”

“It’s going to be the most Godawful civil engineering mess. In Little Dorritt, Dickens called the digging of the original railway cutting ‘An earthquake in Camden Town’. I’ve spoken to HS2 Ltd and they have told me things like the current retaining wall on Mornington Crescent side of the cutting won’t have to be knocked down. I simply don’t believe them, the new line would be below the current one, so the wall would have to be replaced, putting more homes under threat.”

Dobson also poured cold water on the idea from HS2 that they will use the The North London Line to connect HS2 and HS1, as using it had been mooted when HS1 was built, but engineers had described it as a ‘wreck’ and insisted it was both cheaper and easier to have the twin bored tunnels which were built instead.

Sarah Haywood from the Council insisted that they would “Absolutely continue to oppose HS2 as we get absolutely nothing from it besides demolished homes & businesses.” and was incredibly concerned about the plans for Euston Station stating “There is a very real risk, which we will oppose, that the Government will use the redevelopment of Euston as cash cow to pay for rest of the line.”

The idea of using Euston as the HS2 terminus has never really made a great deal of sense. The plan for an 8 year redevelopment, with all the knock-on implications this would have on the West Coast Mainline has been described by one commentator as ‘Performing open-heart surgery on a conscious patient.’ Of course there were previous plans on the table for a development of the station, but that would just involve the building itself, opposed to what HS2 entails which includes moving every track, sinking them by about six feet, and eventually the buffers would end up where the bus stops are now. The idea that the Government want to cash in on Euston and use a hybrid bill to bypass Camden as the planning authority does hold water, as councillors maintained that with a proper Crossrail interchange, almost everywhere in London would be reached quicker from Old Oak Common.

When comments came in from the floor, there was a lot of anger, with some residents who had lived in Regents Park since it was built in 1954 insisting that there is nothing they want besides HS2 not happening and them being able to continue to live in the home. One member of the public said he ‘Felt like he was the dog on the monopoly board’ with another saying that the public did not get the consultation they deserved from HS2 Ltd, they got a cursory exercise, which we all knew was the case months before when HS2 Ltd Chief Engineer Andrew McNaughton had admitted “The most important thing now is that we are seen to have a consultation.”

Since then, there has been more coordination, with HS2 up for discussion at Belsize Park Library on Thursday. Also on Thursday UKIP Mayoral Candidate Lawrence Webb visited residents in Perivale. Along with Green Party Candidate, Jenny Jones, Webbs party oppose HS2 altogether. While Boris Johnson is trying to be all things to all men at the moment and Ken Livingstone bizarrely said recently that HS2 should be tunnelled to Waterloo, HS2 is sure to be a big issue in the upcoming London elections, with Deputy Mayor Richard Barnes the next up, meeting Ealings Stop HS2 campaigners at Perivale Community Centre on Sunday 12th February at 4pm.