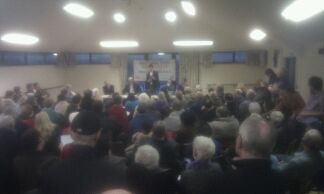 Another full house for a local Stop HS2 meeting. This time, Perivale community centre in Ealing.

Sunday 12th February saw yet another packed out HS2 public meeting, this time in Perivale, part of Ealing attended by Richard Barnes, Deputy London Mayor. Whilst the public meeting was another in a long line of vocal events to inform and coordinate local opponents, more importantly there was a meeting afterwards which saw representatives from action groups across London come together. This first step in London-wide coordination will be increasingly significant as the Stop HS2 campaign dissuades the media from their conviction that everyone opposing HS2 lives in The Chilterns.

The first thing of note was a confirmation of the high handed incompetence of HS2 Ltd, in that of the 150 people at the meeting who lived close to the line, only 20 had ever got letters from HS2 Ltd and of course as always, HS2 Ltd had been asked to attend the meeting and had refused. There was widespread dismay from attendees of the attitude and competence of HS2, with one attendee saying all the questions he asked at the roadshow event were met with the answer “Don’t know.”

There was of course massive concern about the potential impacts locally. When it was pointed out that the noise at the HS2 tunnel opening will be unbearable for both Willow Tree Primary and Northolt High Schools, MP Stephen Pound pointed out that there were another two schools heavily affected in his constituency. The scoutmaster said that the building belonging to the 3rd  Perivale Scouts, who have been serving the community for 70 years then pointed out that they are right next to the proposed line, and was sure they would be in the construction zone. Again it was pointed out it was worse than that with Greenford scouts also in the firing line.

The thing that got the crowd going the most, well it shook the building with laughter, was the idea that HS2 Ltd have apparently said that the plans Hanger Lane junction gyratory would be closed for 18 months. The other comedy moment was when Barnes said “If the national economy depends on getting to Birmingham half an hour quicker, we might as well all move to Greece tomorrow.”

Following the public meeting, there was a coordinating meeting for London action groups attended by resident campaigners from Ruislip, Hillingdon, Wells House Road (Old Oak Common), Harefield, North Ealing, Acton, Kensal Rise, Camden and Westminster, as well as representatives from transport organisations and the national Stop HS2 group. This was a big step in taking the campaign in the capital forward, but obviously all there is to say at this point is watch this space!

email
Tags: News
News
One comment to “London ups the pace as action groups come together.”