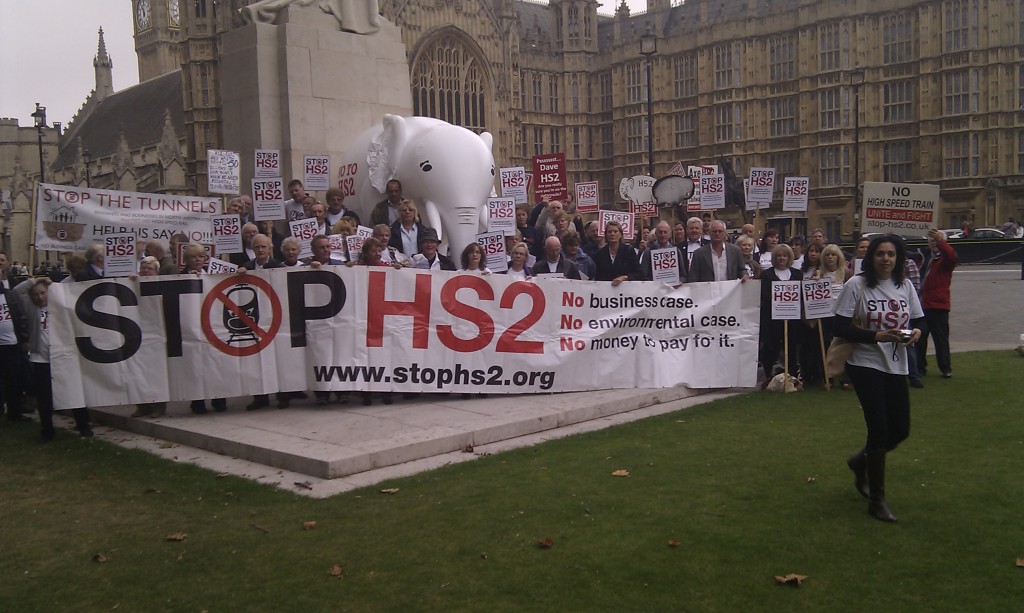 Stop HS2 Campaigners outside Parliament before the HS2 Debate

Last weeks parliamentary debate on HS2 was not only long awaited, but exceptionally positive for the Stop HS2 campaign. Even though some of ‘our’ MPs like Dan Byles, who had been instrumental in organising the debate did not have the chance to speak, more MPs spoke out against HS2 than for it, including several MPs who have been key targets for Stop HS2 such as Congleton Conservative MP Fiona Bruce and Birmingham Labour MP Roger Godsiff. The other thing of note was that most of the arguments put forward by those supporting HS2 were simply not true.

The best of these was of course Theresa Villiers who singled out the ‘weakness’ of Stop HS2s argument, seemingly under the impression we are arguing against longer trains which more people can work on, when the opposite is true. An extra three carriages on WCML trains with the declassification of one first class carriage would double the capacity in standard classon every single train, just like that. In the last month, Virgin trains have already gone from 8 to 9 carriages. This would bring train lengths up to 12 carriages, but in the age of steam they were 16, plus the train. This clearly can be done and of course it would solve another knotty political problem, how the Government could help out Bombardier. This is before you even look at the fact cross-country services have the most pathetic stubby little unfit for purpose trains one could possibly imagine. 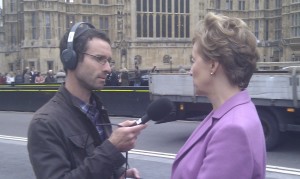 Andrea Leadsom MP being interviewed before the HS2 Debate

Andrea Leadsom started off the debate, straight away batting away the nimby accusation: “When I first heard about HS2 I thought it was a superb idea, but 18 months later all the proposed benefits have fallen away one by one, and there is no hard evidence that spending £32 billion can truly be justified. For instance, there is no evidence that this project will solve the north-south divide. In fact, there is plenty of evidence from the experience in France and Germany, and from our own HS1, that high-speed trains can suck development out of the regions and into the major cities.”

Andrea was on top form, going hard on the fact HS2 was not value for money for the taxpayer, that it cured a small part of the problems with transport infrastructure, that it will cost five times the amount per job created against other infrastrucure projects and of course that the green credentials just aren’t there. Leadsom went on to dismiss the idea that because we are building Crossrail, HS2 should be built as ‘ludicrous nonsense’. With the comparison to HS1, Leadsom pointed out that HS2 Ltds Chief Engineer Andrew McNaughton himself has admitted that his own commute from Kent has become expensive, as it subsidises HS1. She went on to point out that also to compare HS2 with the existing railways or motorways is specious, because they have these things called ‘stations’ and ‘junctions’, which deliver benefits throughout the country, whilst HS2 is effectively a railway without stations.

On the point of roads, the first of the sort of intervention we wanted to see came from Mark Garnier, the Conservative Wyre Forest MP, who pointed out that whilst £32bn of Government capital spending would be a welcome boost to the economy, it might be better spent elsewhere on other projects around the country, one of which being a relief road in his constituency. Having been to Ironbridge for each of the last three years, I can see why the road he is speaking about in Kidderminster is very much needed. This mirrors one of the points I was making at the Rail Summit which coincided with this debate, that HS2 will require between a third and a half of the entire DfT transport infrastructure budget for the best part of 20 years and that’s if the £32bn supposed cost is right. We know it isn’t right, the errors and omissions are there for all to see, before you consider the Envirnomental Impact Analysis, which will jack up the cost, is still to come . One of the audience at the Rail Summit said we shouldn’t upgrade the current infrastructure because the WCML upgrade came in three times over budget. I asked him why on Earth he thought HS2 would be any different. He did not have an answer.

Next for Leadsom was the grossly optimistic passenger forecast, the key reason why high speed rail is an international basket case financially. She went on to question the founding principle of the HS2 economic case, that all time on trains is wasted and of course that while it is something that is way in the future, we will spend £1bn on it before a single track is laid, before 2015 at these times of supposed austerity. Before she finished, one of the most bizarre interventions was from Angie Bray, Conservative MP for Ealing Central and Acton who noted how useful HS2 had been in helping stop the third runway at Heathrow. She seemed to think that HS2 would put people on trains instead of planes, when the reality is that HS2 will connect up airports, encouraging more flights, especially given the initial route to Birmingham Airport, which will have had a runway extension by the time HS2 gets there, effectively making it Heathrows third runway. 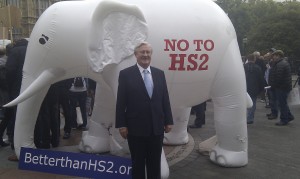 Next up was Geoffrey Robinson, the Labour MP for Coventry NW, who started off by congratulating the turnout from Stop HS2 campaigners outside parliament that day. Echoing Leadsom, he reiterated that pinch points to be relieved as do some of the capacity bottlenecks, which would deliver the whole capacity increase we need. He also made the point that this was clearly not about regional policy, as most of the jobs to be created under the plans are in London, and if that it were about the regions, you would start in the North.

The former Paymaster General went on; “In all seriousness, with £33 billion of capital expenditure, this is the largest capital project that this country will ever have engaged in. That money could be better spent elsewhere. Dealing with the capacity problems between London and Birmingham and increasing capacity by 47% can be done now. The plans are there; they are shovel ready. As I have said, it is not the best way to increase capacity. That could be done in the shorter term and much more cheaply. It will not benefit ordinary people, and it will not help the north-south divide.”

“Above all—I say this in all seriousness to my colleagues from Manchester, Leeds, York and others who are here today—I fear that the real danger is that the line will not get built up there. They will find that the cost of getting the line to Birmingham will be blown up beyond all the estimates. Everyone will heave a sigh of relief and say, “We don’t have to go on. This is the profitable part.” In all likelihood, that is what will happen. As for the environment, the hon. Member for South Northamptonshire made it quite clear that even the Government, and now Greengauge and the other lobby action groups in favour—paid by the Government, of course, or by the company itself—have admitted that HS2 will not do anything for the environment. One is at a loss to know why the Government are doing this. The whole cover was blown by the hon. Member for Ealing Central and Acton (Angie Bray), who said that the Government reached a deal to oppose the third runway at Heathrow and have HS2 instead. It was a £30 billion election bribe.”

Conservative Banbury MP Tony Baldry carried on where Robinson had left off, asking if HS2 was about more people being able to travel, or people being able to travel faster for more money, adding “Greater capacity may mean somewhat unglamorous improvements to services that we already use—improvements such as longer trains, extended platforms and improved signaling.”, but was added a note of caution to the forthcoming Transport Select Committee report, saying “There is a slight danger—as with liquorice allsorts—that Members will pick only the evidence they want”

Richard Burden, Labour MP for Birmingham, Northfield then took it upon himself to weigh in and attack Robinson, on the grounds that HS2 would be great for Birmingham, however this view was imediately challenged by his Labour colleague, Roger Godsiff MP (Birmingham, Hall Green), who said that following the Beeching Axe and rail privatisation, HS2 would be three monumental follies in a row.

Godsiffs comments were everything we had been hoping for. “The fact that business people invariably travel first class and can use their computers and communications networks while travelling, while others will remain in Birmingham, Leeds and Manchester and hold meetings using video conferencing facilities, is dismissed by the vested interest groups, which see a massive tranche of public money that they would like to access.”

“At a time when ordinary people are facing massive reductions in their living standards, living under threat of losing their jobs and watching their community services such as libraries, Sure Start centres and centres for elderly people being axed, we are prepared to commit £17 billion, the estimated cost of the line from London to Birmingham, in order to get business people from Birmingham to London 30 minutes sooner—always assuming that there are no high-speed leaves on the line and the high-speed signalling equipment actually works.” 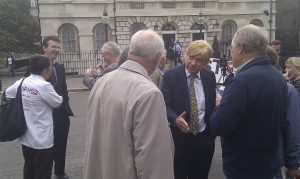 “What other inflated claims are made for the project? It is said that it will help to diminish regional inequalities and promote growth, but there is no evidence of that. If we look at what has happened in Japan, Spain and France, we find that the high-speed connections there have benefited the hub much more than the outer communities.”

“Not one business person has come to me and said, “Thirty minutes is going to make the difference between my company succeeding or not.” It is a fallacy to believe otherwise. However, over the years, plenty of constituents have come to me and said that there should be better public transport facilities within Birmingham—an underground system such as the one in London, a tram system such as those that operate in European cites, improved bus services, or new or reopened train lines and stations within and around the city. Those are the types of improvements that the people of Birmingham want, not a vastly expensive link between London and Birmingham.”

“People have expressed a great deal of concern about the damage that this will cause in the Chilterns and Warwickshire. The impression has been given that only people who live there are concerned about those areas. In fact, many people living in Birmingham travel to the countryside, especially elderly people in my constituency who have enjoyed the benefits of the free or concessionary fares introduced by the Labour Government. They enjoy the countryside; they are certainly not part of the “carpet the countryside with concrete” brigade, and neither am I.”

“We have had many vanity projects in this country that have been a disaster. I hope the Minister will think again about this project, because I believe that if she goes ahead, it will be a disaster.”

Godsiffs comments provoked another intervention from an off-route Conservative MP with Dr Julian Lewis (New Forest East) saying: “At a time when we in constituencies that are not directly affected by this railway project are nevertheless having to fight, for example, to save hospitals from closure due to cuts, it seems sheer madness to look at this level of investment instead of at saving our services.”

More from the debate in part two. The full debate can be found on Hansard.