Three weeks after a crash which official reports state killed around 40 people, the Chinese Government have suspended all new high speed railway projects and 54 trains have been withdrawn by the manufacturer. The Chinese high speed rail project has been dogged by scandal since the outset, with safety problems, management failures, corruption, spiralling costs and low passenger numbers. Whilst both the trains involved in July’s crash were made by China South Locomotive, the trains which have been withdrawn were made by rival manufacturer, China CNR Corporation. 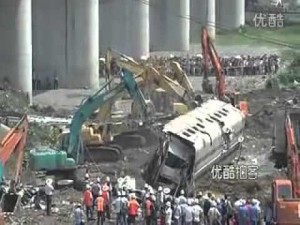 Whether this announcement will influence rail mandarins in Britain on where they buy new trains from for operation on existing lines is unclear. Following the crash on 23rd July Alliance Rail Holdings told China Daily that the incident was unlikely to impact on their decision about where to source trains from as part of their UK franchise proposals, planned to come into operation in December 2013. Prior to the Chinese announcements on Friday 12th August, Chris Brandon, head of Systems for Alliance Rail Holdings Ltd said they had no concerns over the safety of Chinese trains. Since then, a spokesman for Alliance told Stop HS2 “We are still looking at China amongst other suppliers.”

Whilst the Beijing Governments intension with the high-speed rail project was for a ‘flag-waving’ project invoking national pride, it has drawn comparisons with Mao Zedong’s ‘Great Leap Forward’, a disastrous effort in the late 1950s to catapult China into communist prosperity, with the project drawing widespread criticism. Following the July 23rd crash, China an unprecedented social media backlash, with over 7 million people viewing one survivors account.

Within 40 days of the opening of the 350kph Wuhan-Guangzhou line in 2009, there had been five serious accidents and more safety concerns were raised in June this year regarding the strength of concrete used in bridges and viaducts. Just before the major launch of China’s high speed rail between Beijing and Shanghai at the beginning of July 2011, came the news that maximum speeds would be capped at 300 kph rather than the previously announced 380 kph. The former deputy director of Chinese rail ministry’s high speed department, Mr Zhou Yimin, indicated that higher top speeds would only have been possible by “eating into the safety tolerances” of the technology they had “digested” from other countries’ high speed rail systems, however when speeds were first limited, the official line was that this step was taken due to cost, not safety, considerations. The reality was that the original technology purchase agreement clearly stated a top speed on 300kph, or 188mph, equivalent to HS1 in Kent and well short of the 225/250mph proposed for HS2. He also said the authorities had hushed up technical failures that ranged from unscheduled stops due to track subsidence, equipment covers that fell off. According to Zhou, there had also been unreported fatal accidents.

Then we learned that the financial outlook appeared grim for China’s high speed rail. It has incurred a vast amount of debt during the building of its high speed rail network. The debt was estimated to have reached 2 trillion Yuan (US$304 billion) by the end of 2010. The Chinese Railways Ministry is required to pay interest of up to 120 billion Yuan (US$ 18.26 billion) each year. The cost has come in at almost two and a half times the original 1994 budget, making it more expensive than the Three Gorges Dam project, the most expensive construction project in Chinas history. High Speed Rail has accounted for a quarter of Chinas entire economic stimulus package.

The Ministry of Railways has been financing its high speed rail projects through domestic bank loans and bond issues. It planned to sell Yuan 20bn of bonds at the end of July but only found buyers for Yuan 18.7bn. This is the first time a bond issue has not been fully subscribed. There are suggestions that some of the interest due is being added to outstanding loans. The Ministry of Railways debt ratio is at 58% and rising and the service continues to run at a huge loss, due to high ticket prices and low passenger numbers.  It also hasn’t helped that a Zhang Shuguang, the former deputy chief engineer of China’s railways, and his boss Liu Zhiju are accused of siphoning $2.8 billion (£1.7 billion) into an offshore bank account.

This video posted by China Forbidden News prior to last month’s crash highlights many of the concerns (close on-screen pop-up to view subtitles).

The Beijing to Shanghai railway opened on July 1st, but just like with our APT (Advanced Passenger Train) in 1981, the trains were not ready for service and experienced similar problems, such as sticking on tilt. The original start date in 2012 had been pulled forward so the service would open on the 90th birthday of the Chinese Communist Party. Just ten days after the high speed rail system had been launched, the G151 on its way to Shanghai had to stop due to an electrical system malfunctioning. While British trains struggle with leaves, this one was halted by rain. 19 subsequent trains were delayed and other similar stoppages have been reported. Whilst in ’81 the APT was taken out of service after less than a week before something serious happened, the Chinese ignored the problems and almost inevitably there was the fatal crash on July 23rd, which saw four carriages come of a viaduct when two trains collided.

The crash, the rescue efforts, and the state-reported death toll of 39, have incensed a usually compliant nation, with few commentators having faith in the official stories. This is also the case with the story of what caused the crash, which has changed from a lightning strike, to human error and now it seems a signalling fault. The Chinese literally were having a cover-up, burying the crashed carriages.

However, on August 11th China’s State Council (their cabinet) suspended all new high-speed rail projects. Intervals between trains will also be increased to allow a greater margin of safety, meaning about a quarter of the trains will be cut from service.

The decision to cut both the speed and number of trains is a direct consequence of the gung-ho attitude which prevailed in rushing high speed rail through. Untested trains with untested speeds and untested technology were travelling both too fast and too close. These are issues the British Government seems completely oblivious to with the plans for HS2, and highlight that Philip Hammonds insistence that 18 trains per hour at 225mph will be possible on HS2 is pure fiction.

The Chinese have not shown enough concern for fundamental safety issues either with their track or their trains, because for political reasons they expanded their high speed rail network too quickly. However, having built up a massive industry which now has little purpose within China, the Chinese have no option but to tout for international business.

In financial terms, China’s high speed rail network is a millstone around the neck of the country financing the rest of the world, and if the people making the decisions look at anything besides the bottom line, China will have a more difficult job if it wishes to export its technology to other countries.  As Pete Waterman would say; “Just look at what high speed rail has done for China.”