A briefing paper written for the House of Commons Library has been edited following accusations from the Department for Transport, that the £64.9bn HS2 cost estimate it cited had effectively been made up by the National Audit Office. The paper now specifically references a 2017 Department for Transport document which shows that at the time of the 2015 spending review, the estimated costs of HS2 were running at £9.4bn more than the stated £55.7bn budget.

When the House of Commons briefing was first published on 20th June, it claimed that £55.7 billion, which has been the official stated cost of HS2 since 2015 was misleading because this represented the available budget, not the actual estimate of costs. The report stated:

“Various estimates of costs get circulated in the public domain, most notably the £55.7 billion for the full Y-Network. It is important to note that this is not a cost estimate, but rather a funding envelope. The Government remains committed to delivering the scheme within this envelope but estimates at the time of the 2015 Spending Review put the costs of the full Y-network at around £65 billion (in 2015 prices); although this was not published at the time by HS2 Ltd or the Department for Transport (DfT).”

This prompted an angry response from the Department for Transport, who said the report was wrong and effectively accused the National Audit Office of making up the £65bn figure in their 2016 report. Their official response was to say:

“We fundamentally disagree with this report and this figure is incorrect. The Spending Review in 2015 established a long term funding envelope of £55.7bn and we expect HS2 Ltd to deliver to this budget.”

Their response went on to say that:

It has been claimed that DfT also told reporters that they were attempting to get the House of Commons report changed, and whilst this has happen, it has not worked out how they wanted. The HOC report now specifically details the forensic mathematics process which has been used on figures taken directly from the Department for Transport report on the Phase 2 business case, which now raises their 2015 cost estimate to £65.15bn. The DfT report in question was produced in July 2017, and specifically stated that the numbers used in it related to cost estimates at the time of the 2015 spending review. 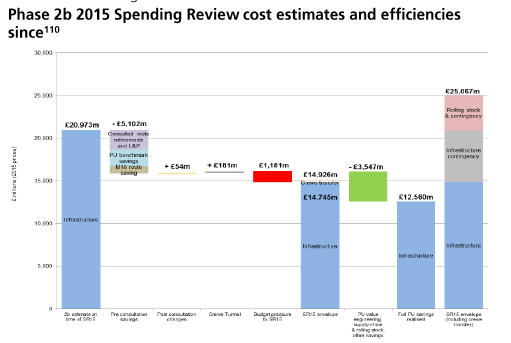 A chart from the 2017 DfT business case for HS2, which has now been added to page 37 of the House of Commons report.

So whilst the number £65.2bn does not specifically appear in the HS2 2017 Phase 2 business case, the simple mathematical process of adding the figures which the Department for Transport did publish in that report to their own Phase 1 cost estimate comes out at £65.2bn.

“When forensic mathematics first revealed that in 2015 the Department for Transport had estimated the actual cost of HS2 at £65bn, they unbelievably tried to suggest that the House of Commons library researchers had got it all wrong and that the National Audit Office had made the numbers up. Just because they did as much to camouflage the costs and never actually used the number £65bn, the Department for Transport seem to think that adding up the numbers their own report contained is somehow unfair and ‘fundamentally incorrect’, which is typical of the levels of denial we regularly see from proponents of HS2.”

“The excuse being used to pretend the numbers from 2015 don’t add up to £65bn seems to be that the DfT are saying the House of Commons has used the wrong type of numbers! Whatever the truth is, the publically available cost estimates for HS2 are years out of date and have not been revised to reflect significant changes to the actual proposals. Both the former and current chairs of HS2 Ltd have admitted the project cannot be delivered on time and on budget to the specified scope, and it is long past time for the DfT come clean about where the estimated costs are now.”