Stop HS2 action groups in Yorkshire have collated a decade of monthly spending reports, in which the Department for Transport is supposed to detail everything over £500 that HS2 Ltd have ever spent, apart for salaries and the cost of buying land. Amongst the obvious headline profligacy and waste, the work raises very serious concerns over the financial probity and competence of both the DfT and HS2 Ltd, as the figures clearly demonstrate that around £100m of spending in 2015 was simply not reported, and since 2017 HS2 Ltd have regularly not assigned an expense type to many invoices, which has left £137,069,661 of spending ‘not assigned’.

The Stop HS2 campaign has responded by calling for both the cancellation of HS2 and the sacking of Chris Grayling who has: “Clearly now demonstrated himself as the most incompetent minister in the history of British politics, and can just about manage to grin gormlessly whilst allowing the HS2 staff and contractors to run their own gravy train. Both HS2 and Failing Grayling have to go, and they have to go now.”

The figures, which cover the period from April 2009 to September 2018, show that by far the biggest winner from HS2 is the contractor that has been with them right from the start, ARUP (with nine different variations of the name on invoices) raking in a whopping £198m so far.

Collating the data has shown two major issues with the reporting of HS2 expenditure that have not been known until now.

The published figures for 2015 are clearly incomplete, with an estimate of around £100m of expenditure not being reported. With HS2 having spent over £100m every other year since 2012, in 2015 the entire spend for HS2 Ltd was reported by the DfT as just £7m. Whilst HS2 has spent £36m on offices, according to the data they spent nothing at all on this item at all in 2015. There are also no figures in 2015 for any spending whatsoever on; IT, contractors, recruitment, printing, training and consultations amongst others, whilst most items that do have recorded expenditure are significantly down on other years.

It is also the case that there are a small number of duplicated entries over the decade, which are due to them appearing one more than one of the DfT monthly spreadsheets. This suggests the DfT have either duplicated some of the entries or they have paid them twice. Either way, this requires clarification.

The idea that this is part of a deliberate attempt to mask what HS2 Ltd are actually spending money on, is supported by the response to a Freedom of Information Request from 2018 which asked HS2 Ltd to: “Please provide the details of all contracts awarded to PR, marketing and lobbying agencies/companies.”

At the time HS2 Ltd responded that:

“Those companies that are awarded contracts are currently recorded by HS2 Ltd on a database management system. The contracts are recorded on this system based on the nature of the contract in place and the service being provided to HS2 Ltd. We do not hold information on whether a company may be considered a PR, Lobbying or Marketing firm as a result of their activities and services outside of their contract with HS2 Ltd.”

So basically HS2 Ltd said in 2018 that they did not employ PR, Lobbying or Marketing companies, because nothing was recorded as such in their contract account database. However, six companies; Williams Lea Ltd, Westbourne Communications, Bray Leino Limited, The Edge Picture Company, Gorkana Group (now Cision) and Dods Parliamentary Communications Ltd have which have received £7m between them from HS2 Ltd, have had their payments from HS2 Ltd in 2018 categorised as ‘”Not Assigned”, when they were previously recorded under expense types such as: corporate communications; media & press; promotion and publicity; media monitoring; communications; and media relations, amongst others.

Last week, MP Cheryl Gillan asked in Parliament how much The Edge Picture Company and Dods have been paid by HS2 Ltd. HS2 Minister Nus Ghani responded that the budget for HS2 is £55.7bn. The correct answer would have been £281,229 and £41,557.

Other headlines of HS2 expenditure include:

“It is genuinely unbelievable that around quarter of a billion pounds of taxpayers money has either been seemingly deliberately misallocated, or has just gone completely missing. How can it be that almost the entire spending on HS2 for 2015, around £100m, has gone missing from the DfT datasets, and it has only now been spotted because campaigners from Stop HS2 have done their jobs for them? How can HS2 Ltd suddenly decide that £137m spent on ongoing contractors can suddenly be ‘not assigned’ as a spending type? How can they continue to be allowed to continue to display such a lackadaisical attitude to such large amounts of taxpayers money?”

“[They can do all this because] HS2 is and has always been totally out of control, because it has been presided over by a series of increasingly incompetent politicians. This has culminated with  Chris Grayling, who has clearly now demonstrated himself as the most incompetent minister in the history of British politics, and can just about manage to grin gormlessly whilst allowing the HS2 staff and contractors to run their own gravy train. Both HS2 and Failing Grayling have to go, and they have to go now.”

“These figures show the eye watering scale of expenditure on HS2, with many millions given to a range of firms by the Government.  And then there are the smaller amounts, such as spending on party photo booths and theatre based courses.  It’s important to remember though that all of this spending is funded entirely from the taxpayer, and if it hadn’t gone on HS2 it could have been used for a range of other priorities, such as schools or the NHS.

“Alarmingly, this is clearly not the whole data.  Figures for 2015 are missing, with supposedly not a penny spent on offices or IT.  Is this just incompetence in releasing the data or have HS2 not recorded the spending at all?  We call on Chris Grayling to do one thing right and cancel HS2 before any more taxpayer’s money is spent on it.” 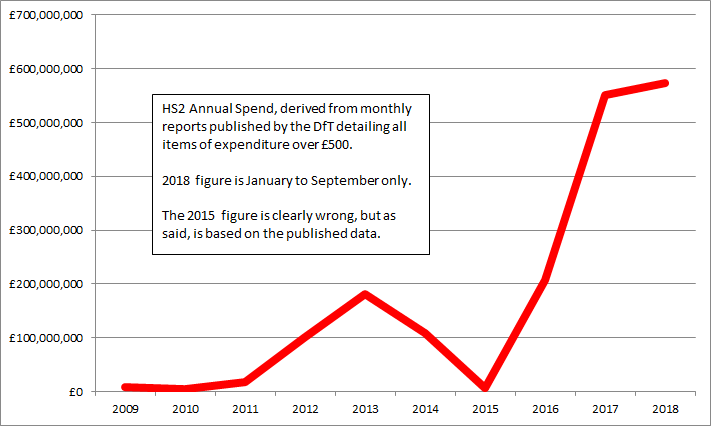 The spreadsheet collating all the expenditure can be found at the link below.

IMPORTANT: PLEASE NOTE Column H labelled ‘Category’ on the Master Data List has been added by the Stop HS2 groups to try and make more sense of the items of expenditure. The £137m of ‘Not Assigned’ spending has not been assigned a category in the original data set by the DfT in Column D. These figures do not include land purchases which are kept in the DfT accounts, but do include associated legal fees and compensation. https://stophs2.org/hs2spend500tosept2018

Staff salaries are not included in the spreadsheet above, and can be found here: https://stophs2.org/hs2-payroll-data-2011-2018

The original data sets from the DfT is published here: https://data.gov.uk/dataset/804be0c6-ae01-4899-bbb9-2317dff1a4f9/spend-over-500-in-department-for-transport-and-its-arms-length-bodies