These days it’s quite rare when the new bad news about HS2 is actually new, but then HS2 Ltd getting taken to court as a result of trying to get out of being taken to court comes along! That’s how last week ended, off the back of the annually looped ‘revelations’ about exorbitant wages at HS2 Ltd, and the hilarious situation of one of the HS2 cheerleaders not realising how it would go down, when he admitted that more billions than HS2 was originally meant to cost will be needed in off the books investment to make HS2 work.

The ‘shock’ that HS2 Ltd have 318 people on their books earning over £100,000 is such old hat to us that at the time we tweeted that it simply wasn’t news. HS2 has always been profligate from the start, with the various CEOs of HS2 Ltd having been recorded as the highest paid civil servants in the country, with Terry Morgan the latest to jump on the gravy train as Chairman on near another quarter of a million for a two-day week. Basically all anyone at HS2 Ltd knows how to do is blow vast piles of money, and their favourite way of wasting it is of course on themselves. T’was always thus.

The standard patter from HS2 apologists is that if you’re building the biggest infrastructure project in the history of the country, you need all the best people. And you know what, for once we actually agree with the 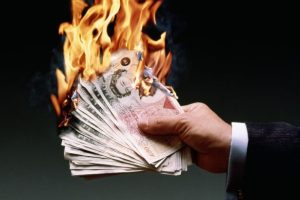 stated opinion of the people who want HS2 to happen. There’s just one problem, whilst great in theory, in practice it’s as clear as glass that no matter how much you offer the brightest and the best, they wouldn’t touch HS2 with a shitty stick. So they’re stuck with burning money in a desperate attempt to attract any old dross. I mean how else could anyone explain the continual categorical failure of HS2 Ltd to get anything they do right?

Back in November, five companies; Alstom, Bombardier, Hitachi, Talgo and Siemens were shortlisted in the race to win a £2.75bn contract to build trains for HS2. The thing was that Spanish manufacturer CAF took exception to this, and went to court looking for £10m in damages and costs.

In a situation that seemed exceptionally similar to the CH2M Hill scandal which saw Mace threaten court proceedings, right up until the point they were awarded a fat contract to refurbish the Houses of Parliament, CAF claimed that HS2 did not follow its own rules on procurement, it didn’t keep records of the document-scoring decisions, and that it had scored bidders against criteria that it had made up after the bids had come in, completely ignoring what was said would happen in the prequalification documents given to bidders. On top of that, CAF claimed HS2 had made errors during the procurement process that breached UK and EU regulations, which also makes the whole thing sound like the mess there was with the West Coast Mainline franchise a couple of years ago.

Worse than that, CAF said that HS2 Ltd had conducted an internal review and admitted that the process was “infected by serious flaws”, but had decided still not to include CAF, or re-run the bidding process.

In June, as if by magic, the court case disappeared. Oddly enough this happened just at the same time that CAF were added to the shortlist apparently “to maintain robust competition”. To save face at the time, HS2 Ltd used the fact that Bombardier and Hitachi had decided to mount a joint bid as an excuse, as adding CAF would put the number of bidders back up to five, and that this change of heart clearly had nothing to do with the court case!

The problem is that the ploy of letting CAF rejoin the process to end proceedings HS2 Ltd knew they would lose due to their terrible processes, has just resulted in HS2 Ltd facing a different court case that they again know they will lose due to their terrible processes, this time from Talgo the Spanish train manufacturer that originally got on the shortlist.

Talgo are saying that the whole thing is a “botched process”, HS2 Ltd have “failed to exercise rational judgement” and factored in “irrelevant considerations” by allowing CAF to be shortlisted. They also claim that HS2 did not follow its own rules on procurement and the process that breached UK and EU regulations.

What didn’t sound familiar was the way Sir John Armitt was scratching his head in dismay last week, after completely failing to understand how it would go down, when he stated that over twice as much as HS2 was meant to have originally cost will have to be spent to make it actually work properly.

This of course is another thing that isn’t news, the fact that HS2 is far removed from an integrated transport system, and that there would be significant problems with dispersing its’ passengers without billions more being spent has always been the case. It’s also been the case that there are plenty things planned that are for HS2, but these are being kept off the books, and it’s generally considered as really important by the pro-HS2 lobby not to mention these additional costs.

With a host of bad press, HS2 Ltd CEO Mark Thurston was prompted to write to the Guardian, to spout the classic ‘on time and on budget’ bullshit, partly in an attempt to blow away some of the smoke left from the landmine John Armitt had willingly raced onto the a couple of days earlier. In a renewed atmosphere of bad news stories, someone had thought it would be a great idea to get a positive puff piece from the new chair of the National Infrastructure Commission, Sir John Armitt into the Telegraph. The problem was, as a fully paid up member of the ‘jobs for the boys club’, being the highest paid civil servant in the country when he was at Network Rail, Armitt clearly didn’t have the first clue how saying “There’s been this fundamental flaw with HS2 from the start, we need more billions to fix it, more billions, more billions!” would go down.

The article started off with what is clearly the new catchphrase the PR consultants for HS2 have come up with, without realising that “HS2 is a project whose time has come” is a phrase that can be taken two very different ways, before going on to say that beyond HS2 they need to “Ensure that passengers can travel easily and quickly once they get off the train and into the cities themselves.”

The idea of course was to champion that whilst HS2 costs might be out of control, whatever the final cost might be it’ll be worth it, and with HS2, cities across the country might get an extra £43bn worth of improvements. No, there should be a £43bn pot to be spent around the country to “Get the most out of HS2”. Oh, and add on the cost of Crossrail 2 and Northern Powerhouse Rail (whatever that is) too.

Because that’s genuinely what the original article was, a statement that it matters not what the eventual cost of HS2 in these times of austerity will be, because it will be worth it, but err, to make it worth it you need to spend £43bn on additional and in many cases largely useless infrastructure, as well as two other massive projects that don’t have costs yet, but it’ll be tens of billions and errr…. it’ll be worth it???

OK, it was lovely for someone in authority to highlight some of the fundamental flaws we’ve seen with HS2 since the start, that it isn’t an integrated transport system, and all the benefits of high speed rail are lost if passengers can’t easily continue their journey, and that these additional off-the-books costs are astronomical. But the real issue is that this is how totally out of touch with reality these people are, that someone being paid – with taxpayers money – as a PR expert said they should go with this standpoint, and everyone involved lacked the common sense understanding of the real world to see how blindingly obvious it was that the response would be headlines like this:

You see, that’s why you need to pay people hundreds of thousands a year, to make sure you have the very best of the best……..