At the weekend, the Sunday Times reported that French company Alstom are interested in bidding to build rolling stock for HS2, promising to build the trains in the UK if it won the tender. However, any such hopes may easily be dismissed by the fact the same weekend it was announced a £490m contract to build trains for Arriva has gone to Spanish firm CAF.

It would obviously be hard for Alstom to build any HS2 trains at their old factory at Washwood Heath, as that is due to become a maintenance depot for HS2, but even forgetting the fact they closed that factory, there are further reasons for taking their promises with a pinch of salt. The reason is that Alstom have a history of pulling out all the stops not to employ British workers, even when the projects were in Britain. Irrespective of where the rolling stock for HS2 is built, it has always been a concern that when it comes to the construction of HS2, foreign workers would be brought in, something Alstom has lamentable a track record of doing.

In 2009, Alstom received strong criticism from unions as a result of sourcing foreign workers to build power stations in Nottinghamshire, Pembrokeshire and Kent. At the latter site on the Isle of Grain, it was revealed that the Polish workers were getting £10/hour, whilst the national industry agreement dictated £14/hour and that protective clothing, which the Poles were paying for, should be supplied by the employer. The row was stoked up into demonstrations, when the construction sub-contractors admitted to Unite that they would supply their workers directly from abroad, and would not be giving any consideration to local construction workers, even though many had years of experience of building power stations. 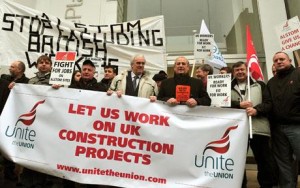 Union demo outside Alstom HQ in 2009

“Our members are not asking for special favours – they are demanding fair play. The UK needs to upgrade and build new power stations and there are huge opportunities to create thousands of well-paid and highly skilled jobs. It will be a disgrace if UK workers are not even allowed to apply for jobs to build British power stations. Alstom has the power to insist that the sub-contractors end this scandalous situation. UK workers must be given a fair chance to get a cut of the action to build a new generation of UK power stations.”

Of course, there is another reason why Alstom might want some good news in the UK newspapers, which is also potentially a reason not to put too much faith in their promises, three upcoming corruption prosecutions brought by the Serious Fraud Office!

According to the SFO, on 23rd May, Alstom Network UK Ltd, and along with Graham Hill and Robert Hallett will face trial on charges of corruption relating to deals in India, Poland and Tunisia. Whilst on 9th January 2017 a trial will begin, again on charges of corruption, this time about alleged offences in Lithuania for Alstom Power Ltd, Nicholas Reynolds and Johanes Venskus. The final corruption trial, concerning the supply of trains to the Budapest Metro will start on 15th May 2017 with Jean-Daniel Lainé, Michael John Anderson and representatives of Alstom Network UK Ltd in the dock.

Given all this, it’s probably quite a reasonable position to be somewhat sceptical about any ‘promises’ that serve to do nothing, apart from give Alstom a positive headline.