A Post-Brexit Keynesian stimulus to the economy has been cited as the only possible justification for continuing with HS2, in a secret Government report which also labelled HS2 as “Fundamentally flawed”, “Poor value for money” and “Would be classified as ‘failed’ by any internationally recognised definition of project success”.

The leaked report was conducted by the Governments’ Infrastructure and Projects Authority in January 2017, just a month before HS2 got its’ final approval in Parliament. Whilst the report was not shared with Parliamentarians before HS2 was approved, it cites a lack of transparency as the greatest threat to the project.

The report states that HS2 would already have been classed as failed in 2016 in terms value for money, keeping to the timescale and budget and the ability to deliver the full scope of promised benefits. Whilst the report states the official projected cost of £57bn is highly likely to cost over £80bn and will mean cuts in spending on other projects, (which many would argue is already happening) it states that HS2 is “possibly justified to infuse the economy in a post-Brexit environment.”

Whilst the IPA has publically rated HS2 as ‘Amber—Red’, meaning the project is “in doubt” with “major risks” for the last six years, this report puts it between Amber-Red and Red, with Red meaning the project is “unachievable” and there are “major issues with project definition, schedule, budget, quality and/or benefits delivery, which at this stage do not appear to be manageable or resolvable.”

The main issues cited in the report are:

Since this report was produced, evidence of significant cost increases due to mismanagement has become apparent. In June 2018 it was reported that contractors had told HS2 Ltd that £6.6bn worth of construction contracts are likely to cost an additional £1.2bn, because HS2 Ltd have still not conducted detailed enough ground surveys. This will also delay finalisation of designs until June 2019. Later the same week, a whistle blower from HS2 Ltd came forward with documents showing that HS2 had underestimated the value of the land they need to buy by at least £1.9bn, which included several thousand properties that had been valued at nothing. 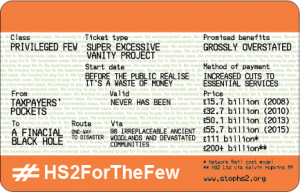 It has also been confirmed that this means there will now not be finalised designs for Phase 1 until summer 2019, yet despite the fact that HS2 is demonstrably three years behind the schedules presented to Parliament during the passage of the High Speed Rail Act, officials and ministers still regularly claim that HS2 is “On time and on budget”.

Last week, the Financial Times reported that the annual accounts of HS2 Ltd show that £2.5bn has already been spent on HS2. When added to the £1.6bn spent on buying land along the route which is kept off the HS2 Ltd books, the total spent so far on HS2 before any construction has started is £4.1bn.

“Over the years, every single justification for building HS2 has been overblown and proved to be spurious. Now we learn that the Government know that HS2 is already a failure against its’ stated objectives in every measurable sense, but they are blindly going ahead with it, knowing it’s going to go tens of billions over budget, because it’s ‘possibly justified’ as a post-Brexit boost for the economy.”

“There could be no better evidence that both HS2 and Brexit are being completely mismanaged than Brexit now being used as a justification for HS2, especially when many say it only got on the drawing board because of an EU directive. Even if it is felt there will be a need for a Government project to provide Keynesian stimulus to economy after Brexit, there are far better projects that would cost less and deliver more benefits to more people more quickly that will not happen if HS2, and this has always been the case.”

“This report shows that Government know HS2 is a failed project that won’t deliver on its’ promises and will go well over budget, and proves they are only sticking with it because they are too stubborn to admit they were wrong.”

“There are many problems with how HS2 Ltd interacts with people outside the organisation, from refusing to pay for people’s land and property which they have already taken to dropping cycling provision.  But it is increasingly clear that these are just symptoms of a hugely dysfunctional organisation.”

“It’s time to ditch this enormous white elephant and get on with sorting out the conventional railways that ordinary people use.”