On Tuesday, two protestors returned to a site off Harvil Road in Harefield where HS2 Ltd have been cutting down trees, and chained themselves to two of them. Sarah Green, who led the protest under the digger last week was chained to a tree, whilst another campaigner was D-locked to one round his neck. 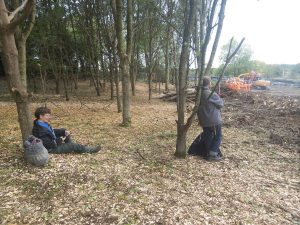 The protestors were making the same complaint as las week, that trees were being felled in the species-rich wet woodlands on the edge of London, without the necessary permissions. Whilst HS2 Ltd now own the land and the Hybrid Bill means they have implied planning permission, this does not exempt them from laws concerning habitats and the treatment of protected species, in this case, specifically bats.

If protected species are present, HS2 Ltd would be required to come up with an ecology plan and have it signed off by Natural England, who would grant them a licence subsequent works. But Natural England have issued no such licence, as they have not been presented with any report that indicates the presence of bats, which is odd given that the 2013 HS2 Environmental Statement concluded that there were as many as nine species of bats just a couple of hundred yards away in what is continuous woodland. 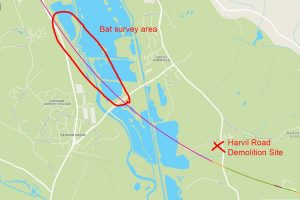 The Harvil Road site wasn’t surveyed in the 2013 Environmental Statement as it is for an additional site compound, but to be able to chop down the trees, HS2 Ltd are meant to have completed two years worth of species surveys. The problem is with the law as it stands is that the developer is meant to do the surveys and only tell Natural England if the surveys say there are protected species present, so no-one seems to have seen these surveys – if they took place – and the whole concept that there wouldn’t be bats there when there are so many confirmed to be nearby by HS2 Ltd, seems unlikely. Further than that, it is simply not true as the protestors who have been on the site overnight have seen bats. 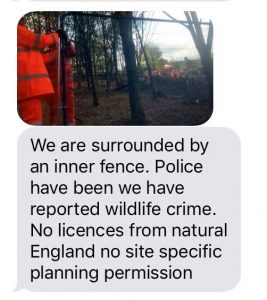 However, when the Police turned up on Tuesday they again had no interest in investigating this breach of HS2 policy and the 2010 Habitats Regulations and the Wildlife and 1981 Countryside Act, but were simply interested in the trespass – a civil offence – being committed by the protestors. After one policeman last week had been filmed saying there was no such thing as a ‘wildlife crime’ (something which will surely be a surprise to the Met Police Wildlife Crime Unit), this week an Inspector said they were not set up to investigate such things, and point blank refused to turn on his body camera when asked to collect evidence. The police also said that the protestors couldn’t be supplied with food and drink (which their supporters outside the cordon had), because they had ‘chosen to be there’.

In the same heavy-handed approach as was seen the week before, the pair were evicted under cover of darkness, during which Sarah was injured.

This will surely not be the end to this story.