For the last fortnight, besides the slip on the Today Programme when he admitted HS2 will cost ‘what it will take’, Transport Secretary Chris Grayling has been insisting that ‘HS2 is on time and on budget’. Last week, we revealed that Grayling himself has redacted all references to the actual working budgets and timescales from the official HS2 development agreement, but without seemingly realising it, HS2 Ltd have now admitted something we have known for a while, that HS2 is running well over a year late.

While the announcement on Phase 1 contracts on 17th July was billed as £6.6bn in construction contracts being awarded, this is not completely accurate, as for now these are only actually design contracts at a much lower price. The HS2 Ltd press notice states:

“The contracts are two-stage, with the contractors spending the first 16 months working collaboratively with HS2 Ltd on the detailed design before construction begins around 2018/19. Preparatory work has already begun on the project with geological investigation underway across the route and ecological and archaeological work due to begin soon.”

Now it doesn’t take a genius to work out that if the final design hasn’t been completed, it’s pretty clear that construction can’t start. Grayling recently decided to try and rebrand the preparatory works as ‘construction’, so he could claim construction had started on time. With that background, it is nice to see HS2 Ltd actually telling the truth for once. It’s also clear that budget must still up in the air, as if the design isn’t finished, how can they be sure what the project will cost? One warning from recent history comes from HS1, as there is one significant difference between the preliminary design of HS2 and the physical reality of HS1: Construction Access Roads.

When HS1 was built in Kent, there were actually more miles of road built than miles of railway. But it was only at this stage, when the design contracts went out, and the construction firms pointed out that they might have to access their building sites on something more substantial than single track country lanes, that these access roads were added. If any changes are to come and they are outside the bill limits (the land-take set down in the HS2 Act), they will mean more money being spent on land, more money being spent on construction, and Section 106 payments will have to be made to local authorities, assuming they grant planning permission. 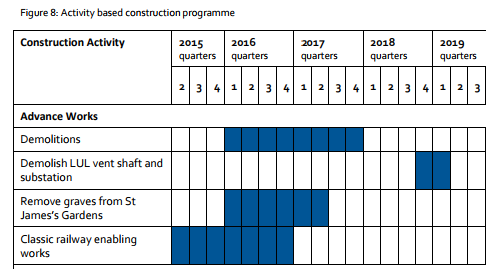 But when Grayling tried rebranding the enabling works as construction, to demonstrate that ‘HS2 is on time’, what he missed was that it is evident some of this work is over two years late. For example, looking at the timescales published as part of the environmental statement, the exhumation of 60,000 bodies in St James Gardens in Camden was meant to have started in January 2016 and taken a year and a half, so it should be finished by now! But no, this work has still hasn’t started, with a final memorial service scheduled for 23rd August. The ‘classic railway enabling works’ will begin at the August bank holiday weekend, with the demolition of an old goods shed that will see Euston closed for the long weekend. This work is happening over two years after it had been scheduled in the 2013 Environmental Statement (see page 55 of the Camden area report), and again, it was meant to have finished by now, by the end of last year in fact. 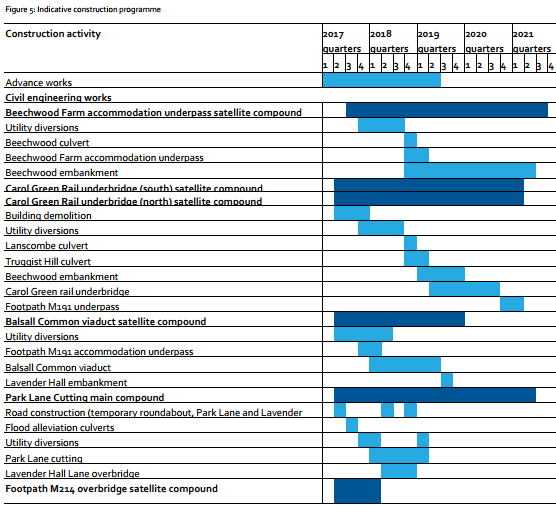 As for construction itself, with the final design process now officially due to take 16 months, this puts the potential start of construction into December 2018 at the earliest. When HS2 say construction would begin ‘around 2018/19’, they mean the 18/19 financial year.

All this is before you consider that, due to the fact there simply aren’t enough archaeologists in the country to properly service the entire 140 mile route in that timescale, that the only way that task could be completed in timescale is to not do it properly. There is also the fact, as HS2 Ltd admit in their statement, that geological investigations to determine ground conditions and hydrology are only now happening, and that the final designs will depend on this work being complete. 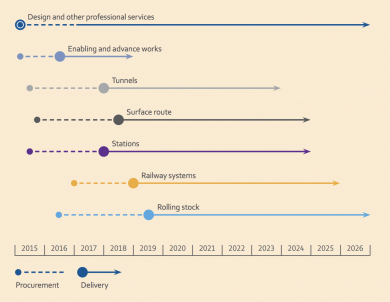 Work on the proposed stations is just as bad. In October 2014 (see right), work on the surface route had already seemed to have officially slipped to the middle of 2018, but HS2 Ltd were still saying the work to construct stations and tunnels would start in January 2018. As design contracts for the stations only just went to the final stage of tendering last month, it’s unlikely the design contracts will even have been awarded by the time construction was meant to have started.

What all these things mean is that actual construction is about a year and a half away if not longer, and looking at how much more unpopular HS2 has got in just the last couple of weeks, we still remain hopeful that there is still time even for politicians to realise that HS2 must be stopped.

email
Tags: News
News
4 comments to “HS2 Phase 1 is Clearly Running Over a Year Late, So Still Plenty of Time to Stop HS2.”