Whilst Secretary of State for Transport Chris Grayling has spent the last week insisting that HS2 is ‘on time and on budget’, he has demanded the redaction of any mention of the actual timescales and budgets HS2 Ltd are working to from the latest ‘HS2 Development Agreement’, which was published last week after an amended version was signed on 17th July. This comes as it has been revealed that HS2 has now spent five years being rated by the Cabinet Office as ‘in doubt with major risks’.

Annex 4 of the Development Agreement has two parts with part one being the ‘Baseline delivery schedule for Phase One’, and part two being the ‘Baseline cost model for Phase One’, both of which have been redacted. Also redacted is Annex 6, the budget envelopes and target prices document, and bizarrely even the definition of what ‘budget envelope’ means had been redacted from the body of the agreement. Annex 10, The Financial Annex is simply blank, with no indication of whether it was redacted or is simply missing. 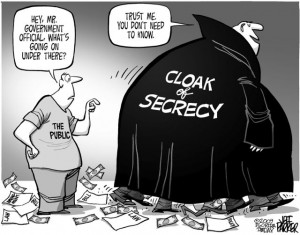 Contents of the document, which is an agreement between Grayling and HS2 Ltd detailing responsibilities for the project going forward, can only be redacted by Mr Grayling with the document itself stating “The SoS may consult with HS2 Ltd to inform his decision regarding any redactions but shall have the final decision in his absolute discretion.”, with a further clause (34.7) suggesting that any parts of the document which have been redacted have been deemed by Grayling to exempt from disclosure under FOI legislation.

Government have a long record of refusing to publish documents which reveal the true details of the HS2 project, such as the review conducted last year by Sir Jeremy Heywood, the ‘Review Point 1’ report which HS2 failed, and around a dozen reports by the Infrastructure and Projects Authority. Last week, the annual report of the IPA (formerly the MPA) revealed that HS2 has again been rated as ‘amber/red’ again, meaning the project has consistently been considered by is ‘in doubt with major risks’ for five years.

One of the few documents which was released following a Freedom of Information request, was the breakdown of budgets in 2015 when the cost of HS2 increased to £55.7bn. This proved that the insistence from politicians that the cost of HS2 had only been adjusted for inflation was a lie, with the FOI showing the cost of Phase 2 of the project increasing by 39%.

Whilst the cost of HS2 has increased by over £20bn since it was first announced and there has been much speculation about where the costs will end up, it is absolutely clear that the project is behind schedule. Not only did the Hybrid Bill for Phase 1 pass almost two years late, but the design and construction contracts which were signed last week had originally been meant to have been signed in June 2016, thirteen months ago (see bottom of page). Grayling has claimed that construction has started on time, but this is because HS2 Ltd have decided to ‘rebrand’ enabling works as construction. Given that final route design contracts were only signed last week, it is blatantly obvious that whilst demolitions on Phase 1 could start, it will be a while before any construction can.

“If Chris Grayling is so adamant that ‘HS2 is on time and on budget’, then why has he decided to make every piece of information about the actual timescales and actual budget a state secret? It seems remarkably convenient that the one public document which could verify that Mr Grayling is telling the truth has been redacted, by Mr Grayling himself. If HS2 is ‘on time and on budget’ as he claims, what has he got to hide?”

“The concept that the construction timetable of HS2 is commercially sensitive and is therefore a state secret is utterly ludicrous. It is absolutely in the public interests to release this information and the working budgets, because this is a government project being built with public money, but the DfT & HS2 Ltd have consistently refused to publish any of the reports that actually tell the truth about what is going on with this vanity project.”

“For five years straight the Governments’ own project watchdog has now rated the chances of getting HS2 right as ‘in doubt with major risks’, and it that might not even be possible to fix all the problems, but this information, like all the other reports on HS2 remains under lock and key, because if it got out the dwindling public support would collapse even further. Sadly while HS2 gets is rated amber/red yet again, all the signals for blowing billions of pounds on this lumbering white elephant while far more worthy projects get binned are green.”

“One thing that is clear with documents relating to HS2 is that the Government tries to get away with hiding as much information as they possibly can.  We’ve already seen this with the review of HS2 by Sir Jeremy Heywood, all the IPA reports and now they are hiding even more information. “

“In the last week before the Parliamentary recess, HS2 contracts were issued for £6.6 billion, and yet rail electrification elsewhere was cancelled.  We’ve also seen that HS2 staff have been given unauthorised redundancy payments, and HS2 gets yet another amber/red warning.  It seems that HS2 is an untouchable grand project, whereas other smaller schemes that would benefit people across the country are ditched.”

To ‘find the redacted sections, open the  HS2 Development Agreement and search for ‘redact’. 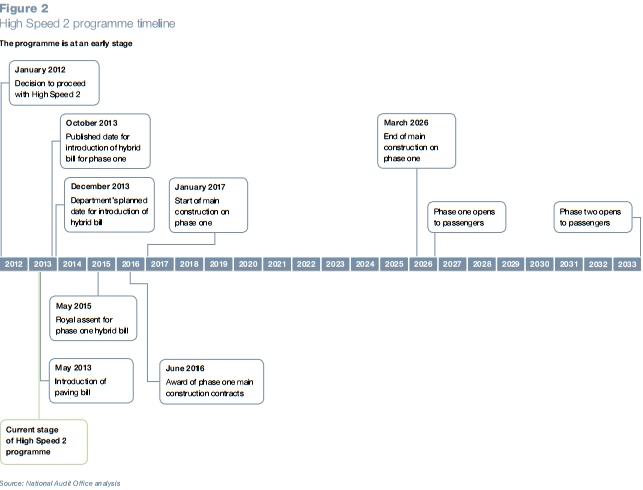 HS2 timetable as published in National Audit Office report on HS2, May 2013: