The projected bill for the HS2 high speed rail network has been estimated at £111bn, double the official £55.7bn figure being used by Government and HS2 Ltd. The estimate was commissioned by the Department for Transport and produced by Michael Byng, the man who rewrote the book on rail cost estimation, devising the standard method of costing which has been adopted by Network Rail following several high-profile failures to accurately cost their projects.

This revelation, published in The Sunday Times (paywall), comes ahead of a big week for HS2 Ltd in which they are expected to: appoint consultants to produce final designs for Phase 1 from London to Birmingham; deposit a bill in Parliament for the Phase 2a extension to Crewe; and publish the final route for Phase 2b to Manchester and Leeds.
Using his “rail method of measurement” formulae to calculate the projected costs of HS2, Byng said that Phase 1 of would cost £48bn, with construction of the entire project coming in at £104bn. This estimate did not include the cost of the trains, which would add around another £7bn, putting the total bill for HS2 at £111bn, double the £55.7bn official estimate.

Lord Berkeley, chairman of the Rail Freight Group, had originally asked Byng to use his model to re-evaluate the costs of the section between Euston and Old Oak Common, which he put at £8.25bn. Byng told The Sunday Times:

“HS2 has not questioned the figure, or my methodology, nor have they come up with any structured estimate of their own. A couple of days later I got a call from the DfT saying, look, if 6.6 miles is going to cost us £8.25bn, what chance have we got of getting to Birmingham? I said: I’ll work it out for you.”

“Michael Hurn, the project sponsor at the DfT, is a very good guy and is very worried at the advice he’s been given [by HS2]. The big contractors are also worried. They’ve said when they submit a bid it’s nowhere near [as low as] the estimates that HS2 have got for the job.” 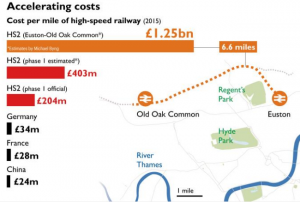 Infrographic on HS2 costs from The Sunday Times

It is anticipated that the contractors who will complete the final design of Phase 1 of HS2 will be appointed this week. This process of final design is expected to take up to 18 months, and will quite probably see another increase in cost, meaning construction of Phase 1 is currently two years behind schedule, even though HS2 Ltd have recently ‘rebranded’ enabling works as ‘construction’, so they can spin that construction has started on time.

Also this week, it is expected that a hybrid bill will be deposited in parliament for Phase 2a of HS2, though whether it will include the promised but uncosted station at Crewe is unclear.

On top of that, the final announcement of the Phase 2b route is expected to be announced on Monday. It is expected that the route will not change substantially from the revised route published last year, which removed the standalone Sheffield station.

“The cost of HS2 has already doubled once since it was first proposed so it should come as no surprise to anyone that it might double again, but when it is the man who wrote the book on estimating rail projects saying this, Government should really listen. With it being so obvious to everyone who lives in the real world that there are so many far more important priorities for public spending, it seems utterly insane that the Government are still wedded to this vainglorious vanity project and all its’ false promises.”

“With the final design for HS2 not due for another 18 months, it is already two years late and that redesign will almost certainly jack up the costs again. Since the start, the case for HS2 has been invented by the very cheerleaders who intend to rake in billions of taxpayers’ money which is desperately needed elsewhere, so it really is time to ditch this gigantic white elephant, before it is too late.”

“The budget for HS2 has always seemed more fantasy than reality.  Up until now the Government has been getting away with it, because the bulk of the spending will come later.  But as construction comes nearer, the real cost of HS2 will have to be paid.  It’s time to cancel HS2 and use the money that will be saved on things that will benefit more people rather than a few fat cats.”

“More environmental destruction, more cost, but no new ideas – that’s what HS2 Phase 2 b is.  While it has been presented to help transport in the north, HS2 is mainly about making it easier to get to London, as there are no east west links involved.  It will make no difference to journeys from Leeds to Manchester or Sheffield to Manchester.  And with no links to HS1 in the plans, it will not help with journeys from the north to continental Europe.”

“With driverless cars being trialled in Milton Keynes and successful hyperloop testing elsewhere, it’s clear that high speed rail is just a faster variant of existing technology.  Government ministers are calling for HS2 cheerleaders because there is no underlying support for it beyond a handful of rail enthusiasts and the contractors set to raid the public purse.  But even supporters of HS2 only manage to drum up airy fairy ‘benefits for mankind’ as reasons to back it.”