Lord Berkeley, chair of the Rail Freight Group has renewed calls for Transport Secretary Chris Grayling to put the brakes on HS2, citing a 4,000 page cost-analysis which suggests the entire budget for HS2 would be blown just on Phase 1. In the latest of a series letters (links below), Berkeley notes that Grayling himself has admitted that “The final [phase one] target price will be agreed in 2019”, and reminded him that Great Western electrification was originally meant to cost £800m, but looks like it will come in at £4bn after significant descoping, and whilst Phase 2 has been recently descoped there is little option to do that with Phase 1 anymore, in fact the opposite is now happening.

Since it was first unveiled in 2010, the official projected cost of HS2 has gradually risen from £32.6bn to £55.7bn, with the latest estimate calculated on 2015 prices. Over the years we have seen the proposed links to Heathrow and HS1 cut, along with plans for a new station at Sheffield. Last month it was announced that the much heralded ‘Crewe Hub’ would actually consist of an extension to platforms 5 & 6 of the existing station.

Last July, Micahel Byng, who had been contracted by Network Rail to re-write the book on costing rail projects after a never-ending parade of them going massively over-budget, used his methodology to estimate the cost of Phase 1 of HS2 would be £48, almost double the official £23.5bn cost for that part of the project, or in other words, the entire budget for building the whole thing would be blown just to get it to Birmingham. For clarity, Byng has not included the cost of trains – the official £55.7bn full cost of HS2 includes £7bn for rolling stock – without that the official cost is £48.7bn.

Crucially, the history of projects such as HS2 is that a budget including a contingency is set, and besides the obvious descoping that anyone can see, what happens behind the scenes is that the contingency starts getting spent. Sometimes, project leaders decide they need to try and hide a massive increase in baseline costs and cut the contingency, like when in 2015 the baseline cost of Phase 2 went up by 39%, but to mask this, the contingency was cut by 20%. In that instance, the overall effect of cutting contingencies massaged a headline £7bn increase in cost for the whole project down to ‘just’ £5.6bn. Of course the punchline was that Government said the ‘route was more certain’ as an excuse for being able to cut the contingency, when a year later they scrapped their route through Sheffield, moving the bulk of Phase 2b through Yorkshire miles to the East.

This is one of the many points that Berkeley has picked up on, as Chris Grayling, like Patrick McLoughlin 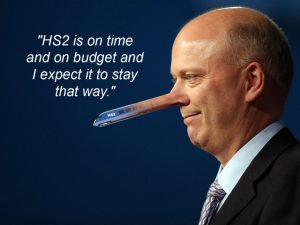 before him has been using one of those lovely turns of phrase, which on the face of it makes it sound like everything has been thought through, saying that HS2 costs have a ‘significant contingency allowance’. The problem with that is that with the Phase 1 contingency now standing at 35%, it is well under the minimum of 65% contingency official advice from the Department for Transport says projects such as this should have. Adding in a 65% contingency would on its own bump the cost of Phase 1 £5.5bn from £24.3bn to £29.7bn.

The other thing with the project is that whilst HS2 have descoped many larger items, they haven’t added in the cost of things that have been sneaked in to the drawings, many of which we’ve been pointing out should have been there since the start, such as:

So of course, with those sorts of facts put to him, Grayling had no choice but to completely ignore these, and many other points when replying, hence Berkeley now making more and new points about the cost, and underlining the whole “4,000 page cost analysis from the bloke who wrote the book on costings and why we keep getting them wrong”.

Berkeley concludes that the only sensible thing to do would be to stop work now and commission the IPA to conduct an independent report.

You can read the correspondence in full via these links;