Besides the ridiculous notion that HS2 will be a magic wand the cure the north-south divide, the argument put about most by proponents of HS2 is that it is needed for capacity reasons. Using the ‘capacity’ argument has become more commonplace because everyone who regularly uses trains has been on a busy train, and will agree that more capacity is needed, but of course HS2 delivers capacity where it is needed the least at a far higher cost than alternative ways of increasing the number of both seats and trains.

Previous Secretary of State for Transport Patrick McLoughlin once famously seized on the fact ‘Britains Busiest Train’ in 2013 ran from London to Crewe as demonstrating the need for HS2, conveniently forgetting the train was so busy because it was only 4 carriages long, and by the time the report was published, it had been doubled to 8, and no-one was standing on it any more.

So ignoring that more carriages can be added and first class carriages reclassified, the argument then put by Government is that there simply is no room for more trains on the track, with the oft repeated line from McLoughlin being: “What we are talking about is the capacity of the rail network. The West Coast line is basically operating at full capacity – there is no more room.”

Again, London Midland ripped that argument up by changing their timetable and adding seven trains in peak hours out of Euston in 2014. In 2015 though, the DfT said that without HS2, crowding on inter city West Coast ‘could‘ become particularly acute on Friday evenings in the future and that load factors above 100 per cent are already experienced in the busiest hour between 7-8pm.

Besides the fact that a bit of standing in the evenings does not exactly sound like the most urgent capacity crisis on the rail network, it’s actually far less significant when looking at the actual Autumn 2014 data, which showed there were 24/1000 passengers standing on Fridays and only 7/1000 on other weekdays).

However, the DfT also handily point toward the solution, as they state that between 7-8pm the West Coast fast lines out of Euston have a current peak capacity of 15 to 16 trains per hour. The thing is, there aren’t 15 or 16 trains on the fact lines out of Euston during that period, but 11 or 12. As you can see below, there are 9 Virgin Trains using the fast lines (note not 10, the Chester/Holyhead train is one service) in pink, and only 2 or 3 of the London Midland trains in green use the fast lines. 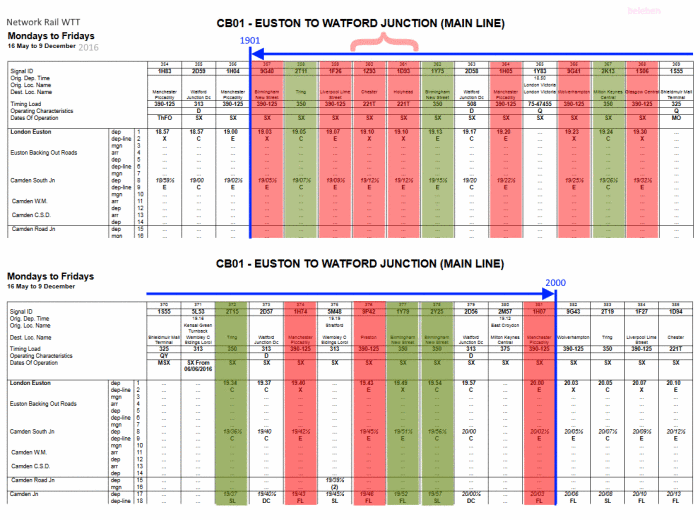 As we have long said in the past, capacity on the railways is being kept artificially low as a direct result of rail privatisation. The bottom line is that, like London Midland did, Virgin could operate more trains out of Euston simply by changing their service pattern, but of course that would mean lower profits.