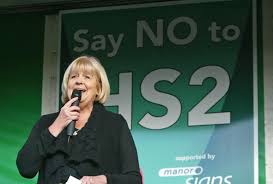 For nearly seven years, much has been written about HS2, the proposed railway line to connect London to Birmingham, then on to Manchester and Leeds. Hundreds of millions of pounds of taxpayers’ money has been spent on what appears to have become a self-perpetuating white elephant.

Transport, business and infrastructure experts have relentlessly challenged its necessity and value for money, affected residents have had their homes, lives and properties literally destroyed by the project, and several Parliamentary Committees have heavily criticised its administration and management. But still, it continues to roll relentlessly on, and now I fear that it is becoming too big to fail.

The current budget is £55.7 billion, although the Taxpayers’ Alliance has recently estimated it could reach £90 billion. The same report condemned its weak business case and branded it a ‘wasteful vanity project’. It would take a courageous and sensible politician to stop this right now, and re-evaluate its merit and value to the economy over other transport and infrastructure needs.

The salary of the Chief Executive of HS2 Ltd is £750,000 per annum, and 128 members of the HS2 team earn over £100,000. This is to say nothing of the millions of pounds now spent on lawyers and consultants, who appear to have a limitless blank cheque when it comes to fees. It is the people directly affected that seem to have to fight for every penny of compensation and often have to make do with less than their properties were worth before this monster came along. The newly appointed Secretary of State for Transport is the fifth Minister to inherit the scheme, and yet, the plans for HS2 remain unfinished, unsatisfactory and controversial. Indeed, as it stands, the arrangements for the terminus at Euston remain up in the air, and still the Government insists that a construction commencement date in early 2017 is viable.

With all the problems on our railways, it is clear that this money could be more usefully invested in other infrastructure projects and in modernising our current lines. If the aim of HS2 really is to rebalance the regional economies in the UK, the funds for HS2 should be redirected to connecting our northern cities along the trans-Pennine corridor, ‘HS3’. Instead, we are left wondering whether the aim of the project is just to build a shiny new railway, delivering little more than underwhelming economic benefit, environmental destruction, and a huge bill for the taxpayer.

Although a vigorous opponent of this project, I understand the limitations of the few fighting the many and have always had a twin track approach; if Government cannot see that this is the wrong scheme at the wrong time, I want to ensure that at least it is executed in the best way possible. This includes ‘fair and generous’ compensation for those affected, as promised to me by the former Prime Minister and now announced for people affected by fracking, and the highest level of environmental mitigation, particularly for the Chilterns Area of Outstanding Natural Beauty which runs through my constituency of Chesham and Amersham. Currently, despite winning more tunnelling, 8.8km of the AONB is exposed to the railway over ground, causing irreversible environmental damage. It is disappointing that a Government professing to be the ‘greenest ever’ is willingly destroying protected landscape, when there are cost effective and feasible engineering solutions available to protect it.

The Prime Minister has said that she will review projects such as the Hinkley Point nuclear power station, and I hope she will now do the same for HS2. I encourage the new administration to have the courage to deconstruct this gravy train and formulate an integrated transport strategy that works for everyone.

I have been called a ‘nimby’ for the past six years for speaking out against this project, but the HS2 problem is emblematic of something much more worrying. I have witnessed a scheme, devised as a pipedream in the last Labour Government, gather increasing political speed through successive parliaments, in spite of countless doubts and amber/red warnings that this railway will not justify its enormous taxpayer price tag. Adverse reports have even been concealed and suppressed, so messianic are its supporters. Logic and sense seem to have been abandoned in the process of conceiving this ill-fated project, but it is not too late for the Government to rethink its transport and infrastructure strategy and finally put a stop to HS2. No responsible Government should ever say that a project is too big to fail but rather that it should pass the test: “if this was my own money would I spend it on HS2 over and above other priorities?”

email
Tags: News
News
One comment to “HS2: Is it too big to fail?”