Lottie Jones writes about Boris Johnson’s visit on Friday to places in his constituency affected by HS2. Originally posted on Ruislip against HS2. 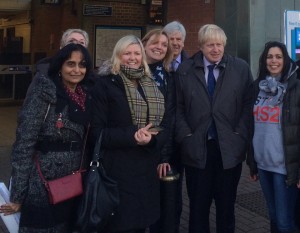 Hillingdon Against HS2 have had several meetings with Boris before but this was a really useful day to help put all our HS2 concerns and issues into context.

We introduced him to different residents and business owners and walked the route of the utility works that will cause so much disruption to Ruislip.

We started the afternoon with a meeting at my home with Boris, leader of Hillingdon Council,Ray Puddifoot, Cllr Susan O’Brien and residents representing Herlwyn Ave, Lawn Close, Almond Close and Roundways and West End Road.

We discussed the unfairness of the Select Committee process and the knock on effect of not being able to achieve the much needed mitigation of an extended tunnel through Hillingdon and the Colne Valley. 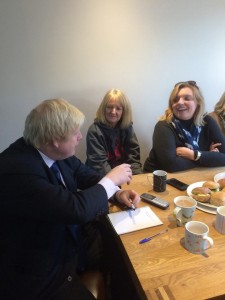 The additional provisions (changes to the plans) of the HS2 Bill are not satisfactory mitigation measures but purely an exercise in pushing the problems around in circles with new and different areas being affected including the A40. We went through various maps to help put the problems into perspective and we felt he very much understood the frustration we still face with HS2 Ltd’s illogical planning.

We then walked to Keri Brennan’s home on Roundways and used the view from her garden to help explain how HS2Ltd have misled residents about the depth of the tunnel through Ruislip and he was able to understand more clearly why many residents are still so worried about the effects of tunnelling and settlement to their homes. We talked about how despite being next to a tunnel blight still exists in terms of property values and ability to sell. 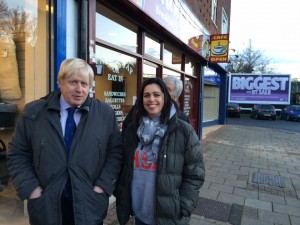 On New Pond Parade Boris heard concerns from various traders in the shops about how the utility works could affect their businesses and we asked that he helped us put a case to the DFT to try and secure some community funding for those affected by HS2 in Hillingdon who are unable to claim compensation from the effects of construction.

We showed him the problems that the utility works could cause to the park and green space locally known as Banana Park and highlighted the flooding that often occurs under the bridges on West End Road and Bridgewater Road which have still not been taken into account fully by HS2Ltd. 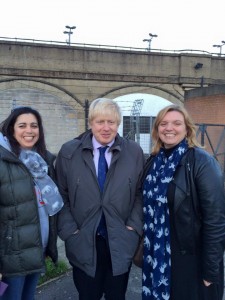 The day gave us the opportunity to spend more time with Boris as our MP and to hit home the message that although we face so many local issues with HS2 when you put them into perspective with all the concerns along the HS2 route and more nationwide priorities, HS2 is just wrong on every level – and ultimately he couldn’t disagree with us.

HAHS2 will continue to work closely with Boris over the next few months and will be looking to him to help us make progress in getting our message to David Higgins at HS2 Ltd. and of course to Government.