A briefing note published jointly by HS2 Ltd and the Department for Transport shows a minimum of 1,479 landowners will be affected by amendments to the HS2 Hybrid Bill, which will be debated by MPs on Tuesday (15th September).

Whilst in some instances, the explanatory note concerning ‘Additional Provisions’ 3 and 4 (AP3/4) shows that the number of affected landowners is for some reason still ‘to be confirmed’, at least 631 new landowners will be impacted. 514 new landowners will be affected in the London Borough of Camden alone, with the Government describing this impact as ‘minor changes’. In total, there will be changes in 22 parliamentary constituencies along Phase 1 of the proposed route.

However, like with previous amendments to the HS2 Bill, MPs will not have the full details of what they are expected to vote on before the debate. Whilst the full details of AP3 concerning changes around Euston are expected to be published two days after the debate, Stop HS2 understands that AP4, concerning route-wide changes will not be published until October, most likely after the four-week petitioning period for AP3 has concluded on October 16th.

This lack of detail is sure to be criticised by Parliamentarians, as when AP2 was debated on the 23rd of June, Meriden MP Caroline Spelman, whose constituency will be again affected by AP4, complained:

“I just cannot tell from the map, frankly, what the new route is, and that makes it very difficult for me to know how the change to the road network is going to affect various people in my constituency. At that point the line severs a number of landowners’ holdings, to the point where some farms might no longer be viable, so I impress upon the Minister how important it is that Members of Parliament have a better quality map than the one provided, because I cannot understand the one I am looking at.”

Whilst earlier this week the Government issued mock ups of a completed Euston station, including a new entrance which has been dubbed as resembling a ‘fungal toenail’, no actual designs for the station, let alone details of the impacts on rail services during construction will be released prior to the debate. The explanatory note states: 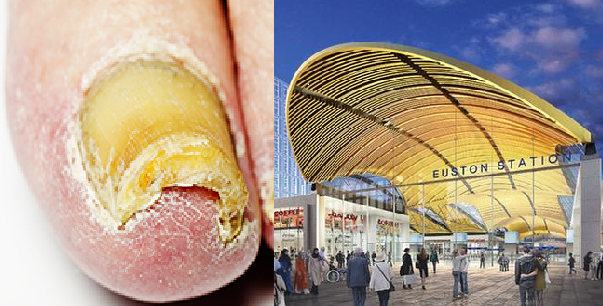 “The majority of the changes to the design can be implemented under the powers in the existing Bill and therefore are not addressed in the AP. Consequently, the AP for Euston comprises a number of minor changes to the powers in the Bill. These minor changes are detailed in the first 15 pages of this document. For a more general description of the proposed changes at Euston, please refer to Appendix A. The full details of the proposed changes will be published in the Environmental Statement (ES), subject to Parliament’s approval of the motion.”

The most detail of what will happen at Euston seems at the moment to be plans presented to Camden residents in August, which show that two of the approach lines (E and X) running into Euston will be decommissioned during construction, which will remove a third of the capacity on the approach tracks into the station for an unknown period, on top of the 19 weekends of full station closure. Besides the weekend closures, no details of the disruption at Euston have been published, and it very much seems that the proposals submitted by HS2 Ltd have not been approved by Network Rail who run the station. In the presentation to residents, HS2 Ltd state that enabling works in Camden which require moving utilities will start before 2017, whilst construction phase ‘B2’ will continue after 2033, discrediting the statement from Government earlier this week that construction will take 16 years.

“MPs are being asked to vote for 20 years of construction impacts to the West Coast Mainline, with no more than a picture of the proposed fungal toenail entrance to Euston to go on. It is simply irresponsible to ask MPs to vote for these changes without knowing how removing a third of the approach capacity into the station will impact on current rail services for the best part of 20 years. The fact this information isn’t available leads to two possible conclusions; most likely is that no-one has bothered to work this out because HS2 Ltd are solely concerned with hitting their deadline for submitting something no matter how half-baked it is, or they have worked out what the disruption will be and it is that terrible they are too scared to tell anyone before the vote.”

“It is simply disgraceful that the actual designs for Euston will only be published two days after MPs are expected to vote for them, with the other amendments to the route coming out over a month after that vote. It seems very much that Network Rail and TfL have had no input into the proposed redesign of Euston.”

“With almost 1,500 property owners affected by the proposed changes to HS2, and over 600 of them being newly affected, the obvious conclusion is that the project has been poorly planned from the outset. Typical of HS2 Ltd, they have issued a briefing which is short on detail, expecting MPs to blindly vote for it with no details of what it will do to the costs or timescale, save the fact downgrading the Euston plans will cost £250m more, and there is an unknown extra redevelopment cost, whenever Network Rail and TfL point out their problems.”

“The only thing that is currently clear is that there is going to be an increase in the cost of HS2 which HS2 Ltd are going to try and stick on someone else’s budget and the unknown knock-on effects of rail disruption will be horrendous.”

“HS2 Ltd have been trying to spin their Euston plans as the panacea for any existing problems with the current station.  But as they say more about the plans, it becomes clearer that HS2 are just plonking their platforms into the area.  Not only are they leaving it up to other organisations to revitalise the existing station, but they admit their £2.250 billion budget for the high speed part of Euston station doesn’t even include everything HS2 Ltd needs to build there.”

“These additional provisions show that many more people will be affected by HS2 than already.”