The Department for Transport have today (2nd July) responded to a report on HS2 produced by the Lords Economic Affairs Committee in March. The ‘Economics of HS2’ report had concluded that the Government has failed to make a convincing case on HS2, stating that Government set two main objectives for HS2: increasing capacity and rebalancing the economy, and a convincing case has not been made for either of these.

Predictably, as has happened with every Parliamentary report which has raised concerns about HS2, the DfT have dismissed all the points made by the Lords. More of a surprise is that the Government response ‘forgot’ what happened to the Trans-Pennine electrification project last week, claiming “We are doing this now”.

The Lords Economic Affairs Committee had concerns that the decision to proceed with HS2 was made without any evidence of a co-ordinated transport plan and that it might be the wrong priority. The Government responded (page 26 of their response document):

“It is simply not a case of having to choose between HS2 and investment in Trans-Pennine links…….. We have committed to the Northern Hub and electrification projects, commissioned modern trains for Trans-Pennine routes and committed to commuter capacity increases….. We are doing this now, not waiting until after HS2 is complete……. An important point is that HS2 is not taking money away from the existing rail network or other modes of transport.”

In response to the consistent international evidence which shows HS2 would benefit London at the expense of the rest of the country, the Government simply pointed to support from Northern and Midland politicians and a report from KPMG which was dismissed as ‘essentially made up’ by top economists.

The Lords EAC also had concerns about the cost of HS2, which were dismissed in this response:

“Spending Round 2013 established a clear funding envelope of £50.1 billion at 2011 prices, including contingency. There are strong controls in place to ensure we remain within our budgets, and we aim to deliver HS2 below this figure.”

The fact the costs of HS2 are still expressed in 2011 prices has been of concern to many observers, and following a recent Freedom of Information Request from Chiltern Councillor Seb Berry for an updated figure in 2015 prices, he was told by HS2 Ltd that “We do not hold this information” and by the DfT that there is “no business need to estimate the cost of HS2 in 2015 prices”.

HS2 Ltd spokesman Katherine Button went further, saying: “Using a consistent price base for costs provides the Department for Transport with transparency around how costs and benefits have changed over time. This is no different from the manner in which the Department has supported the delivery of other major infrastructure programmes.”

This statement highlights the issue the Lords were trying to make. They had said the Government should be clear if £50bn is the absolute limit for the cost of HS2, or whether this will increase with inflation. HS2 Ltd saying the method used to calculate their costs is consistent with other major infrastructure projects, which have gone massively over budget is far from reassuring, especially in the context of the recent Network Rail debacle. 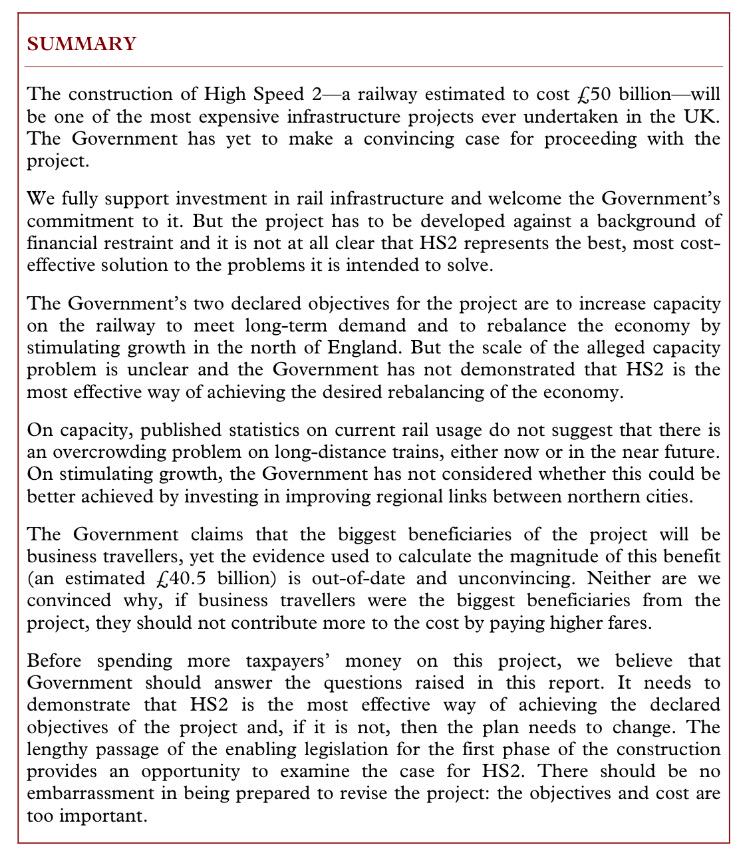 A summary of findings from the Lords Economic Affairs Committee on HS2.

The Government attempt to dismiss questions about the need for capacity on the West Coast Mainline by stating:

“In Autumn 2013 (the last published statistics) London Midland had the second highest level of overcrowding for London and South East operators.”

This point is disingenuous to say the least, as response admits that since then, London Midland have increased the number of trains they run on fast lines, and the most overcrowded train in the country in the quoted statistics was the London Midland 16.46 service from Euston to Crewe. The reason for overcrowding on that service was that it comprised of just 4 carriages, which were extended to 8 carriages in December 2013. This means that service should no longer be overcrowded at all, and it could be extended to 12 carriages like many other London Midland services, which is clearly a much cheaper and simpler way of addressing capacity issues.

In respect to alternatives to HS2, the Lords EAC said that: “These options have not been assessed equally, with only HS2 receiving serious consideration by the Government.”. The Government responded by referencing the reports the Lords had considered as part of their inquiry,  and made statements which have been thoroughly tarnished, such as the idea that upgrading the existing network would mean the “equivalent of 14 years of weekend closures”, despite the fact Great Western electrification is being done mainly overnight.

The Committee had argued that such large expenditure should be considered against the background of financial restraint and that the cost-benefit analysis of the project relies on “Out-of-date and unconvincing” evidence, some dating back to 1994, and they state that they find it difficult to have any faith in 82% of the total benefits of HS2, as they are based on the value of travelling time. However, in response to this, the DfT responded that: “Our appraisal techniques are world class……. While we are confident in our existing techniques, which have been built up over many years to be a world class basis for informing decisions, the Department also continues to develop its appraisal methods.”

This again, seems rather a hollow sentiment in the context of the need to ‘pause’ projects which had been subject to the same ‘world class’ appraisal techniques.

“It is no surprise that the Department for Transport stuck their fingers in their ears and dismissed every concern that the Lords Economic Affairs Committee have about HS2, as they have already done the same with the Public Accounts Committee, the National Audit Office and the Environmental Audit Committee.”

“What might be a surprise to some is the sheer incompetence of the DfT, dismissing the idea that Trans-Pennine electrification should be prioritised ahead of HS2 by claiming that they are still doing that project ‘now’, a week after it was booted into the long grass by Patrick McLoughlin. However, this comes as no surprise to us, as last week the DfT claimed Stop HS2 were ‘false and misleading’, because we quoted a DfT statement in a previously hidden report, which said they were not sure three years ago if they could afford all their other projects if HS2 were to go ahead.”

“It is clear that Government do not want to listen to any of the balanced, independent analysis of HS2 which has been undertaken by other Parliamentarians who have no axe to grind, save trying to make sure that taxpayers money isn’t flushed down the drain on a white elephant which cannot be justified. It is now surely clear, as we have always said, that we cannot afford HS2 and everything else that people need. It is time to cancel HS2 before any more money is wasted.”

“The Government’s response to the Lords Economics Committee shows how disjointed then Department for Transport is. They haven’t even attempted to answer many of the questions asked by the Lords, and the answers they have given have been demolished long ago.”

“What’s worse is this report completely ignores the announcements last week about the pausing and review of Network Rail improvement projects.  The Lords asked whether improving regional rail links in the north should be prioritised ahead of building HS2.  In this document, the Department of Transport claim they can do both, referring to the Northern Transport Strategy, electrification projects and the Trans-Pennine links, even though last week, the Trans-Peninne electrification project was paused and almost all other rail projects are under review.  They’ve shown they haven’t the money to do both.”