Stop HS2 were rather surprised to see press reports yesterday that Graham Evans MP had slammed our recent email in the House of Commons – especially as no-one from his office had been in touch with us to ask about anything we had written in it.

Graham Evans (Weaver Vale) (Con): A recent e-mail to Members from the Stop HS2 campaign was riddled with inaccuracies, exaggerations and distortions. The high-speed rail link between London and Manchester is absolutely essential for promoting investment in northern constituencies such as mine, but unfortunately a ragtag alliance of luddites and nimbys appears to be making ludicrous arguments against the plans. May we have a debate on high-speed rail so that these falsehoods can be tackled head on?

Sir George Young: The Attorney-General will have heard the robust language used by my hon. Friend to describe other hon. Members. I think that I am right in saying that there is a bid to the Backbench Business Committee for a debate on HS2, and I hope that that will be an opportunity to debate the matter further. I remind my hon. Friend that, as he knows, it is the Government’s policy to proceed with this investment.

So we rang them, and discovered that our email had provoked a response from Philip Hammond, Secretary of State for Transport. 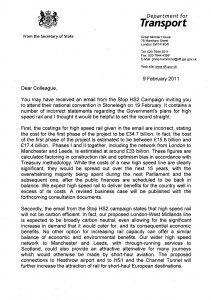 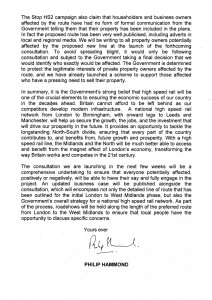