Over recent months, the House of Lords Economic Affairs Committee has been conducting an inquiry into HS2. On 9th December, it was the turn of the DfT and HS2 Ltd to give evidence.

Lord Hollick started the meeting pointing out that the business case for HS2 relies on putting cash values onto the time passengers would save by going faster, and that the numbers involved might not be robust as they were derived from a survey of car users conducted in 1994. McLoughlin responded that the numbers were revised in 2013 and bizarrely claimed they now reflect the fact that passengers do work on trains, which seems at odds with reality, as that would potentially see a neutral or even negative value put on time savings.

In a move which mirrored exactly what has happened overall with HS2, as soon as the business case was put under scrutiny, Mc Loughlin quickly tried to move the justification away from the business case to capacity, but Lord Hollick wasn’t having it. Part of the problem for McLoughlin had said the business case had been revised following work from the Institute for Transport Studies, which gave Hollick the opportunity to say the ITS had in their evidence to the committee said they had problems with the ‘value of time’ calculation. This had been a point made by Stop HS2 in an earlier evidence session, that the HS2 Ltd had taken the ITS study and cherry-picked the bits that suited whilst re-interpreting some of the definitions, such as how long ‘long-distance’ is.

On capacity, McLoughlin, David Prout of the DfT and Lord Deighton of the HS2 task force had a hard time trying to justify the capacity argument once they had accepted that in peak hours trains out of Euston were 50-60% full, with Lord Hollick drawing a line under the discussions when he admitted that even his committee had not been allowed to see the actual passenger figures, because of ‘commercial confidentiality’. 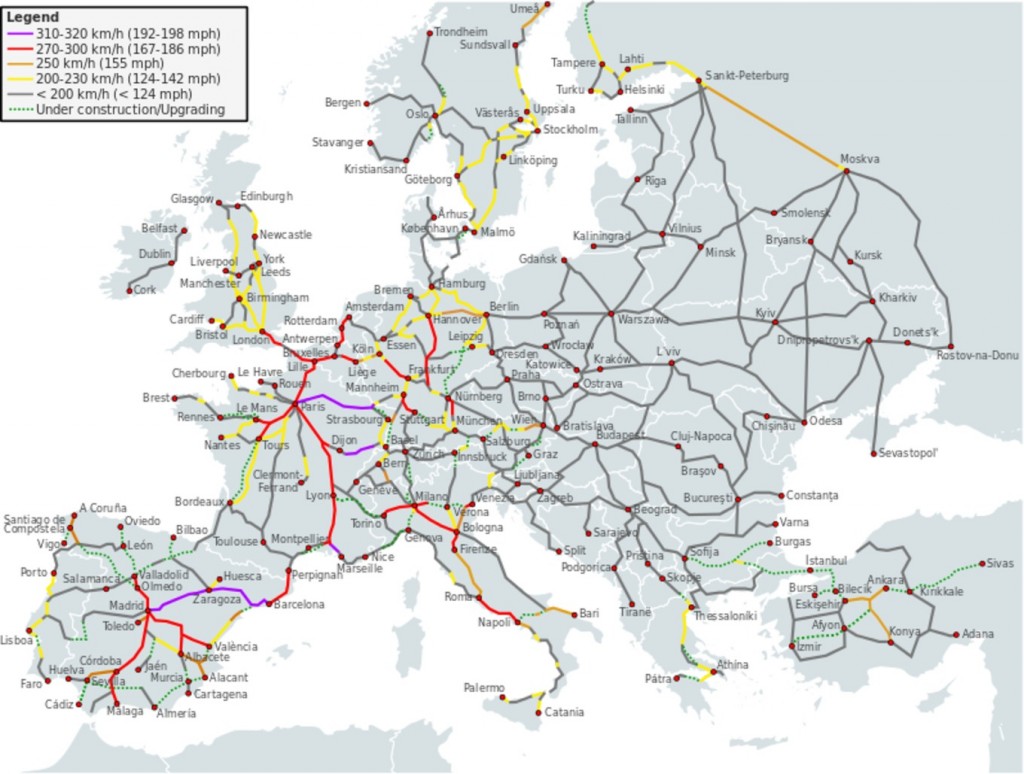 The official map of high speed rail lines in Europe, which Patrick McLoughlin keeps pretending does not exist.

Sadly, McLoughlin did the whole thing yet again where he said that you can’t get a high speed train from London to Birmingham or London to Leeds, when as Transport Secretary, he knows this simply is not the case.

McLoughlin again tried to claim that freeing up capacity does not mean cutting services. Initially he said HS2 would massively free up capacity for more both passenger services and freight. But when he was asked about the “Coventries and Rugbies of this world” keeping services, he said “This is an addition to services, it’s not a minus. Coventry is 11 miles from Birmingham International, so there will be connectivity. The areas Lord Monks talks about will have more opportunities because there will be more capacity” McLoughlin then went on to talk about Stoke, say the proposed Crewe station isn’t that far away from the A500.

email
Tags: News
News
2 comments to “McLoughlin at the Lords”