A few weeks ago, we highlighted the problems with HS2’s plans for Euston, which HS2 Ltd had admitted were not ‘fundable’. 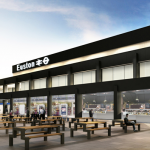 This was then picked up in the Sunday Telegraph – HS2 ‘slowly dying’ as Euston terminus plan grinds to halt – although HS2 Ltd spokesperson, Ben Ruse claimed this was merely a ‘pause’ (the Heathrow spur has now been ‘paused’ for nearly two years).

David Higgins tried to put the alternative view with the BBC, claiming that “We haven’t stopped anything and haven’t delayed a thing.”

However, that’s not quite true.  Back in March this year, Andrea Leadsom said that Higgins had “announced that he will come forward with a radical new plan for Euston in six months” – i.e. in September, before the date of the meeting reported on by us and the Sunday Telegraph.

“As Sir David points out, all they have to do before 2026, when phase one of the line opens, is to add six or seven new platforms, independent of the existing station.”

However to get HS2 trains, which are wider than ordinary rolling stock, into the station will require tracks being moved – unless Higgins is planning on only having Classic Compatible trains going into Euston.

That massive descoping of the HS2 plans would certainly be radical and save a significant amount of money – but would also be an embarrassing climb down for whichever minister had to announce it.

HS2 has put back plans to select a developer to transform Euston Station into the high speed rail project’s London terminus, the client has confirmed.

Higgins’ claim that nothing is delayed is looking less and less believable by the day!

Whatsapp
Tags: News
News
One comment to “Euston, We (still) have a problem”