Today the Chancellor has been keen today to talk up the fact that he wants to create a ‘Northern Powerhouse’, with the proposed HS3 scheme being central to that plan. In addition, Mr Osborne said that he will replace ‘Pacer’ trains under new franchises, but ignored the fact that this process has stalled.

This week it was reported by ‘Modern Railways’ that the tendering process for Trans-Pennine and Northern Rail franchises may be delayed because of uncertainties regarding the current ‘Northern Hub’ and Trans-Pennine electrification programmes. According to ‘industry sources’, the invitation to tender documents, which were due to be published this year are likely to be delayed because there is an:

“Inability of Network Rail to deliver a firm timetable for the completion of electrification work in the North West and slippage in the Northern Hub programme.”

“According to a senior insider, it’s an utter farce that at the moment so much is unknown.’”

“In the midst of the confusion, the Department for Transport has even asked bidders what they suggest it should do.”

Despite the northern electrification project starting a year ago, there has never been a published budget, and back in June, Clare Moriarty, Director General, Rail Executive, Department for Transport told the Transport Select Committee:

“At the stage when the schemes were listed out, a number of schemes—northern electrification may be one of them—were at quite an early stage, when it was not possible to say absolutely definitively what they would cost.”

Following this, Paul Plummer, Rail Delivery Group member, and Group Strategy Director, Network Rail was asked if the project would happen and replied:

“I cannot give you that absolutely categorical confirmation. I can say that, within Network Rail, everybody working on all of these projects is working on the basis that they will be continuing and will be delivered, and that is absolutely clear.”

“It’s all well and good for George Osborne to talk about a ‘Northern Powerhouse’, HS3 and new trains, but the reality is that the timescale and the budget for current rail projects have slipped. The Chancellor can talk about replacing the ‘Pacer’ trains all he likes, but the reality is the new franchises are being delayed because the infrastructure is late and over-budget. He has to come clean on this and admit what the situation actually is, but he hasn’t done that because the fact current projects are overdue and over-spent will only damage the HS2 vanity project, and demonstrate that the eye-watering £50bn price for that will only go up too.”

“Everyone knows that Government projects come in late and over-budget, and it is clear that local transport projects are the ones which deliver the greatest benefits to communities, so the way forward is clear; do not gamble £50bn on a white elephant no-one needs, but instead make sure that the local projects which will alleviate crush-hour conditions actually go ahead.”

“Whatever the case for better East – West links in the north of England, it’s clear that George Osborne has already decided what the solution will look like. By insisting it should be High Speed 3, Osborne shows he has made up his mind: it’s going to prioritise speed over the real needs of ordinary people.” 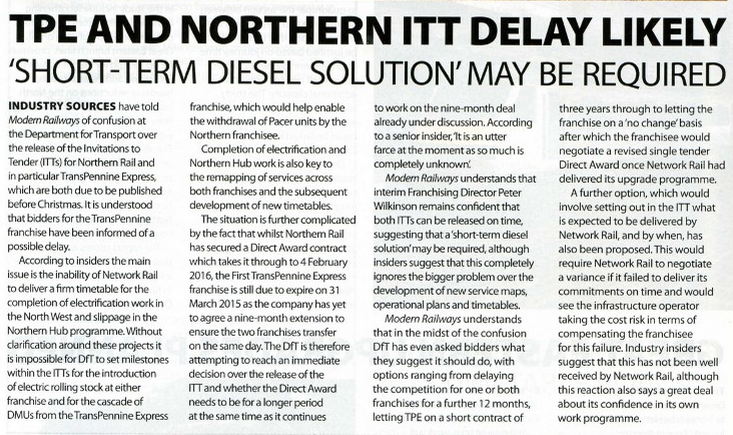