UPDATE – The petitioning period will take place from 19th September to 17th October. Those who have already submitted petitions will not have to pay £20 again.

The Stop HS2 Campaign is urging people who are affected by HS2 proposals to get in their responses to the current compensation consultation quickly, before the Government announces changes to Phase 1 on Tuesday, 9th September, which will increase the required land-take and trigger the start of a second ‘opportunity’ for affected individuals to submit petitions against the Hybrid Bill.

Despite there having been no forewarning to affected individuals and existing petitioners against the HS2 Hybrid Bill, HS2 Ltd will publish ‘additional provisions’, which will make changes to the HS2 proposal along Phase 1 of the proposed route following what is expected to be a short Parliamentary debate on Tuesday 9th September. The only communication there has been with communities about the publication of additional plans were emails in June to arrange delivery of documents to selected village halls and libraries. 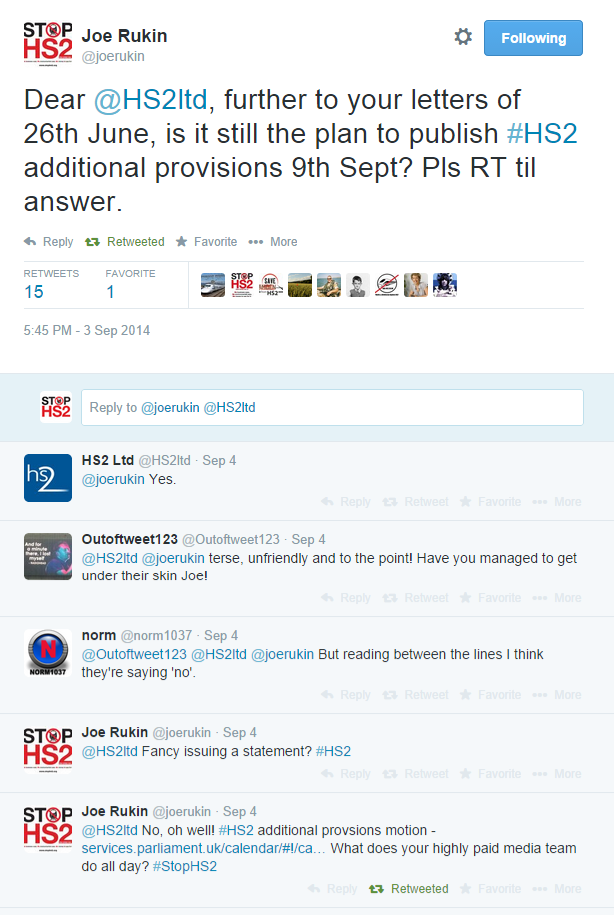 Getting blood from a stone: The only public admission from HS2 Ltd that the additional provisions will be published on Tuesday 9th September

Last week, HS2 Ltd issued a low-key email to some press outlets, but decided against publishing a press release on their website. It is claimed that the most significant issue which will be covered within the additional provisions will be to increase the land-take required during the construction of HS2. The only public acknowledgement by HS2 Ltd of the publication date has been a one word tweet to the Stop HS2 Campaign Manager.

In a move similar to when MPs were asked to vote for an unlimited amount of expenditure on the HS2 Paving Act, MPs will be asked again to vote blind on the motion “Relating to the High Speed Rail Bill”, as there have been no details published about what the additional provisions would be, just a list of Parishes (full list at bottom of page) which will be subject to additional provisions, with changes coming under three headings:

Despite the HS2 Hybrid Bill Committee, who are currently hearing petitions, saying that they might consider skipping ahead to London to try and get petitions concerning the redesign on Euston Station done before the General Election, the London Boroughs are the only local authorities not listed as being home to additional provisions, meaning that the redesign of Euston Station is not complete and there will have to be both further additional provisions and another petitioning period at a later date for those changes.

Also, whilst the Davies Commission has not fully reported, they have confirmed that their recommendation will be that Heathrow Airport remains at least in its current form, so the reasons for suspending the designs and cost of the proposed HS2 Heathrow spur have been eliminated. This means that there will have to be another future set of additional provisions concerning this link at some point in the future.

Given that understanding and petitioning against additional provisions will require considerable time and effort by those effected, Stop HS2 is urging people to respond to the current compensation consultation, which concludes on September 30th, as soon as possible, and as such have set up a quick response form on their website.

This week, the Government has announced the long awaited final plans for Phase 2 will be announced in ‘autumn’.

“The only reason these additional provisions are needed is because as usual HS2 Ltd didn’t get things right the first time, and now those affected by HS2 will face the additional imposition of having to submit written petitions again. As such, we are urging people affected by HS2 to visit our website and respond to the current consultation on compensation as soon as possible. While this consultation is about Phase 1, we have always said that decisions made about Phase 1 will have to affect Phase 2, so people on Phase 2 should respond too before their route is finalised.”

“As the Government wants to be able to provide information about the changes to the route in electronic format, we are asking that people submitting petitions are given the same rights, instead of having to hand-deliver physical copies of their petition in quadruplicate and pay twenty quid for the privilege. Anything less would be another case of the double standards we have come to expect.”

“It seems completely daft that HS2 Ltd are issuing additional provisions in the knowledge that they will have to submit another set in the future because they have to redesign Euston and put the link to Heathrow back in, but neither of those seem to be there this time. All that shows is that the HS2 Bill was rushed through without being ready, and even when they are given a second chance to get things right, HS2 Ltd still can’t manage it.”

The motions to be discussed on Tuesday are as follows:

After paragraph 10 of the Order insert–

“10A The Order of the House of 26 June 2013 relating to electronic deposit of documents shall apply in respect of a Bill presented as mentioned in paragraph 2 or 4 as in respect of the High Speed Rail (London – West Midlands) Bill read for the first time in the current Session.”

(1) that the Select Committee have power to consider–

(a) amendments to accommodate the requirements of landowners and occupiers in:

(i) the parishes of the Little Missenden, Great Missenden, Wendover, Stoke Mandeville, Stone with Bishopstone and Hartwell, Quainton, Preston Bissett and Turweston in the County of Buckinghamshire,

(ii) the parish of Finmere in the County of Oxfordshire,

(iii) the parish of Chipping Warden and Edgcote in the County of Northamptonshire,

(iv) the parish of Little Packington in the County of Warwickshire,

(v) the parish of Berkswell in the Metropolitan Borough of Solihull, and

(vi) the City of Birmingham;

(b) amendments to accommodate changes to the design of the works authorised by the Bill in:

(i) the parishes of Stone with Bishopstone and Hartwell, Fleet Marston, Steeple Claydon and Twyford in the County of Buckinghamshire,

(ii) the parish of Mixbury in the County of Oxfordshire,

(iii) the parishes of Culworth and Whitfield in the County of Northamptonshire,

(iv) the parishes of Radbourne, Southam, Stoneleigh and Curdworth in the County of Warwickshire, and

(v) the City of Birmingham;

(c) amendments to accommodate the requirements of utility undertakers in:

(i) the parishes of Denham, Wendover, Ellesborough, Stone with Bishopstone and Hartwell, Quainton and Grendon Underwood and the town of Aylesbury in the County of Buckinghamshire,

(ii) the parishes of Offchurch, Burton Green, Little Packington, Coleshill, Curdworth, Wishaw and Moxhull and Middleton in the County of Warwickshire,

(iii) the parishes of Drayton Bassett, Hints with Canwell, Weeford, Swinfen and Packington, Fradley and Streethay, Longdon, Kings Bromley and Lichfield in the County of Staffordshire, and

(iv) the parish of Bickenhill in the Metropolitan Borough of Solihull,

and amendments for connected purposes;

(a) the petition is presented by being deposited in the Private Bill Office not later than the end of the period of four weeks beginning with the day on which the first newspaper notice of the amendments was published, and

(b) the petition is one in which the petitioners pray to be heard by themselves or through counsel or agents.

That these Orders be Standing Orders of the House.l