Whilst the budget for professional services contracts on Phase 1 of HS2 was originally set at £101m, the total spend on these contracts up to the end of February this year was £188m, 86% over budget. Of the 16 ‘professional services’ contracts, every single one is over-budget, leading to criticisms that consultants are “running their own gravy train”.

Building.co.uk uncovered the figures as a follow up to an investigation to HS2 costs they conducted last November. Back then, they discovered that the Civil and Structural Design Services contracts were running 18% over budget. This figure has now risen to 53%. Railway systems contracts are 60% over budget, whilst land referencing and environmental services are both over double their estimated costs, at 108% and 150% over-budget respectively. 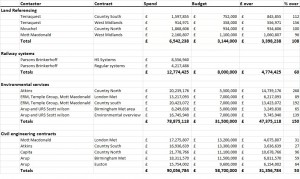 Full breakdown of contractors overspend, as of February 2014. Click to enlarge.

Despite this fact, a HS2 spokesperson told building.co.uk that HS2 “had so far been delivered within its overall allocated budget for the project” and the company was “on course to remain within” this budget for the current financial year.

They went on to say that the consultants had helped “produce a scheme that has an implacable approach to environmental mitigation, with the correct balance of engineering design”.

This of course hardly tallies with the fact that HS2 Ltd recently admitted to the Commons Environmental Audit Committee that they had not even surveyed 40% of the route and there ‘may have been omissions’ from their ancient woodland directory. The Woodlands Trust state that HS2 Phase 1 will go through 27 ancient woodlands, 8 more than HS2 have admitted to.

In fact it was the completely inadequate environmental work in rural areas which was responsible for the biggest overspends. The biggest overspend on a single contract was for environmental impact assessments on the line in Warwickshire, Solihull and Staffordshire coming to a cost of £20.2m, almost four times its original £5.5m budget. The rural area south of this covering Northamptonshire, Oxfordshire and Buckinghamshire was not far behind, coming in at £20.4m, against an original £7m budget.

The lowest overspend was ‘just’ 27%, whilst six contracts are currently over double their original budget.

“Despite empty promises from Government that HS2 could be delivered on time and on budget, HS2 Ltd have completely failed to exercise any budgetary control. What we have seen over the years is consultancy firms getting away with it and running their own gravy train, with not one even coming close to their budget. The implications for the final cost of the project are truly titanic, as these overspent budgets are for millions of pounds on preliminary work, not billions of pounds on construction.”

“With communities, environmentalists and even the House of Commons Environmental Audit Committee all in agreement that the HS2 Environmental Statement was inadequate, it is astonishing that it came in two and a half times the original budget. We shudder to think how much it would have cost if it had been done properly!”

“The Government have kept saying that David Higgins brought the Olympics in on budget, but of course the final £9bn cost was almost four times the original budget. In that respect, HS2 is going exactly the same way.”

“Last year David Higgins was asked to look at the costs of HS2 and see where he could make savings.  Not only did he fail to find any savings, he only managed to keep to the same headline budget by ditching major parts of the project, like the link to HS1. It’s clear that the management of HS2 Ltd have never had control of the budget.”

“The consultants engaged on the project know that Parliament has allowed the Department for Transport an unlimited budget to spend on high speed rail. They also know that this a project the government are determined to push through, whatever the costs.  It is up to the Department for Transport and the Government to ensure consultants keep to the budget allocated to them, but clearly they are failing on this.

“The Coalition Government want to commit future governments to spend tens of billions of pounds on this unjustified white elephant of a project.  They should do the taxpayer a favour, save all that money and cancel the HS2 as soon as possible.”