HS2 Ltd plan to conduct ‘vegetation clearances’ on at least 22 sites at the start of bird nesting season, which could lead to contractors breaking the law. Previously, HS2 Ltd refused to publish the legally required wildlife impact assessments before clearing habitats, and the assessments of the risk to water supplies before drilling in the Colne Valley, where they also broke at least three ‘Assurances’ given to the Woodland Trust in Parliament as part of the Hybrid Bill process.

Given this, and the failure of HS2 Ltd to comply with the 1973 Land Compensation Act on an industrial scale, campaigners are concerned that contractors will continue in this vein and ignore the Wildlife and Countryside Act 1981 and the Countryside and Rights of Way Act 2000, which give legal protection to nesting birds, meaning it is illegal to take, damage or destroy the nest of any wild bird while that nest is in use or being built.

As there are still no final designs for HS2, none of this work is related to the construction of HS2, it is all enabling works, such as moving utilities and building temporary construction roads and compounds. It is almost certain that HS2 Ltd will actually be clearing habitats on more than 23 sites, however listed below are all the works notifications we could find on their incredibly user-unfriendly commonplace series of websites, that admit ‘vegetation clearance’ will take place. There are several ground investigation boring surveys taking place which will almost certainly require the removal of habitats.

Obviously, the most effective way of avoiding breaches to this legislation is to conduct activities that might disturb nesting birds outside of the nesting period. But displaying their usual competence, instead of starting this work a couple of months ago when this would not have been an issue, HS2 Ltd have decided clearing nesting sites right at the start of bird nesting season, which usually covers the mid-February to the end of August.

Many people believe that with the HS2 project in serious trouble and in danger of getting cancelled, HS2 Ltd have decided to spend as much money and create as much damage as possible, to try and make the project harder to scrap.

But the site that is garnering the most attention is the one that is by far the largest at 250 acres south of Steeple Claydon which is significantly bigger than the village of Steeple Claydon itself, where demonstrations have been called from 6pm at the HS2 drop-in events at Calvert on 27th February and Steeple Claydon on 7th March. 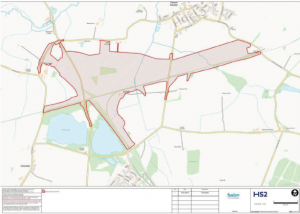 “Destroying countryside during bird nesting season is environmentally criminal and there is absolutely no need. HS2 is so far behind schedule already that there are no designs, no contractors and no costings for this IMD build. Indeed, none of the line between the Chilterns and Leamington Spa has been designed or costed yet and the whole project is already over budget, over schedule and is in complete chaos!”

“There is absolutely no need to rip the heart out of the Steeple Claydon countryside now – during bird nesting season. In the Community Engagement Plan, Mark Thurston talks of building ‘mutually beneficial, long term relationships. Abusive – is the only way I could describe HS2’s relationship with Steeple Claydon over the way this has been done.”

“For HS2 Ltd to even be contemplating ripping up habitats at the start of nesting season is an admission of abject failure and total incompetence for a body that is years behind schedule. It is no surprise that HS2 Ltd may well engage in illegal habitat clearances, as with it becoming clear that the entire HS2 project is on the ropes and may well be scrapped, they seem desperate to cause as much damage and spend as much money as possible to try and make it harder to cancel. Their whole attitude is one of criminal irresponsibility.”