There has been a long history of proponents of HS2 being willing to say anything to prop up the case for HS2. Recently we had the case of Patrick McLoughlin saying that Canary Wharf wouldn’t have been built without the Jubilee Line extension, despite the fact construction started 2 years before the JLE was approved. We have also had the new lead spokesman for HS2 Ltd, Ben Ruse (whose latest gaffe is below) being quite willing to say that HS2 is better for the environment, in complete contradiction with the QC representing HS2 Ltd in the Supreme Court. Well now it’s been the turn of the new chair of HS2 Ltd, Sir David Higgins. 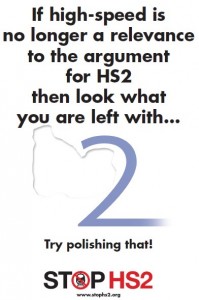 If HS2 is not about speed, what is it about?

A bit of honesty from the HS2 Ltd lead spokesman!`

In keeping with the current shift in the argument from those supporting HS2 he said: “To date, everyone has focused on speed. To me, it [HS2] has never been about speed. It is about capacity – the bottom of the West Coast main line is full. It’s also about connectivity.”

The problem with this argument of course is that it was never about capacity until it was found that all other arguments had been knocked down. If capacity is the question, then HS2 would not be the answer, and to claim HS2 is about connectivity when it offers next to none is bizarre to say the least.

His comment to the Transport Select Committee which got the most headlines was the idea that it is possible to start HS2 in the north and work down. At best this is cynical PR spin, at worst a complete failure to understand the process. With the Phase 1 Hybrid Bill ready to go in a couple of months and due to take a couple of years, the idea that you could start at the top and work down is pure fantasy. There are three ways in which you could do this:

None of these options are likely in the current climate, especially because they all involved delays to Phase 1 and it has been clear from the outset that the Government have only been interested in getting HS2 through quickly, before more people wake up to the fact the project is a white elephant.

Finally, Higgins was torn apart by Adrian Sanders, Liberal Democrat MP for Torbay over his knowledge of geography asking: “How does connectivity help the far South West of England, which has some of the slowest journey times and the highest fares.”

Sir David said: “HS2 is not a case of either-or. We will spend more money in the 20 years that HS2 will be built on the existing network – upgrading it – than we will on HS2. In Western, there is a £7 billion project which takes electrification to Cardiff and on to Swansea and the Valleys – at the moment to Bristol. That will bring line speed on a whole section on the western …”

Mr Sanders interrupted: “Can I stop you there and maybe ask you to look at a map and answer the question again. How does it help connectivity in the far South West?”

Higgins tried: “What it does is mean its core route moving from the Thames Valley through to Bristol further south.”

Sir David said major investment was being ploughed into Bristol. “That’s where we stop when we carve off South West England at that point. Then we’ll look at continual improvement.”

He added ministers were considering proposals to shore up the line around Exeter following flooding last year that left the region marooned.