This article is by Dr Paul Thornton.

Hundreds more home owners across a new swathe of Staffordshire, and Derbyshire may be affected by HS2, the High Speed Rail proposal, because of an alternative route being pushed by Derby City Council and considered by the Department for Transport. 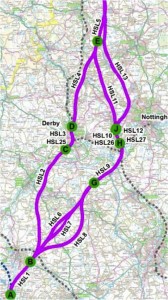 Freedom of Information enquiries have revealed that the alternative route proposal is not simply a back of the envelope concept but precise plans had been given to the council after being worked out in great detail for HS2 Ltd by engineering firm ARUP. Every embankment, bridge and cutting is shown along the route.

This is not simply a minor correction, or a small branch line into the city centre. Rather it is an enormous change to a substantial section of the Birmingham to Leeds line over a distance of some 60km (40miles).

The transport secretary, Patrick McLoughlin, confirmed to the Derby Telegraph on the 18th July that the route through Derby would be considered as part of the current consultation saying “At this stage, I’m not ruling anything out”.

Despite assuring that this proposal is under active consideration, McLoughlin has done nothing to ensure that affected householders and communities are properly informed. Nor have people living on the currently preferred route been informed that alternatives are clearly possible. This throws doubt on the lawfulness of the entire consultation process.

Councillor Paul Bayliss, leader of Derby City Council launched a campaign in January claiming that the city council would spend “tens of millions” fighting to have the station in Derby. Paul Bayliss, the city council leader, claimed it would bring millions of pounds and thousands of jobs to the city, adding that the line would be shorter and therefore cheaper to construct. These figures derive from an economic analysis commissioned by the council from the very same multinational railway and engineering and construction company, ARUP, who prepared the “via Derby” route plans .

The current government preferred route does not go to Derby and does not go to Nottingham. It will stop in the no man’s land between them at Toton. Getting to the cities will require changing at Toton station. This will knock out any time savings for HS2 passengers compared to the journey times possible on a genuinely intercity journey on an upgraded Midland Main Line.

Instead of diverting away from Derby to Toton, the Labour-led Derby authority wants to see a route passing to the west of Swadlincote, through the centre of Derby and then between Belper and Heanor. Paul Bayliss, the city council leader, claimed it would bring millions of pounds and thousands of jobs to the city, adding that the line would be shorter and therefore cheaper to construct.

Politicians in areas afflicted by the government preferred route are pressing for the alternative route. Leon Spence, Labour councillor for Flitwick in Leicestershire endorsed an alternative route in April 2012.

And in July 2013, Leicester County councillor, Nick Rushton has lobbied the Government to run the route up to Derby missing Leicestershire altogether.

The new route proposal is an embarassment for Heather Wheeler, Tory MP for South Derbyshire, who has previously been expressly loyal to the government in respect of its HS2 proposals.

On the 9th July, Wheeler told the Burton Mail: “The Secretary of State has made it quite clear his preferred route which is for the new station to be at Toton.” But then went on to make the claim later repudiated by McLoughlin that “The consultation is about minor amendments to the preferred route so an extra 500m of tunnelling to preserve an area of scientific interest. It isn’t about redefining the route completely.”

Similarly, the new route will be awkward for Pauline Latham, Conservative MP for mid Derbyshire, whose constituency will accrue most of the alternative route to the north of Derby city centre. Mrs Latham dutifully shares the coalition’s justifications in favour of HS2 in a brief statement on her website dated 13 March 2013. But otherwise there seems little to indicate her enthusiasm or explicit support .

The alternative route also impacts on the Amber Valley Constituency of Nigel Mills MP, who told parliament on February 1st 2013 that he welcomed the announcement of the HS2 extension “and especially the fact that the route will miss my constituency off to the east”

Through Derby itself, the proposed HS2 line largely follows the line of existing tracks.

At its southern end, the “via Derby” route adds further to the impact of HS2 for Christopher Pincher, Conservative MP for Tamworth. Pincher recently rebelled, voting against the government in the first vote on the HS2 paving bill that has triggered the recent tsunami of critical independent comment about HS2.

With so many competing issues, it is difficult for MP’s whose constituencies are not impacted by the route to devote their full critical scrutiny to the HS2 proposals. Now ARUP’s red and blue ink of has crossed into new constituencies these few more MP’s will be forced to understand the detail.

Perhaps they will join with the growing clamour of independent observers who recognise that the best route for HS2 is direct to the bin.

The alternative route would leave the current proposed route at Polesworth. A detailed map can be found via this link, which would affect:

In the meantime, the Stop HS2 campaign stands ready to support yet more affected communities.