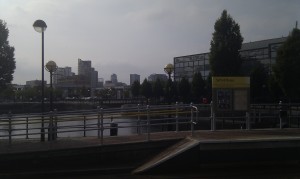 It had been over a decade since I’d been to Salford Quays. Back then I was working for an international shipping business based in Longsight, though the idea that those slow boats to China would depart from Salford had long passed. Across the country at the time, and nowhere more than the area where the Manchester Universities met, the most accidental regional development policy was taking place.

While many had thought that the end of free university education would see falling student numbers, what they didn’t realise was that at the same time as tuition fees came in, the caps which had limited the number of students universities could take was lifted. This, coupled with an aggressive overseas marketing campaign from British Universities which saw international student numbers balloon, created a very real need, where do we put all these students?

With universities capped on how much they could borrow for capital projects, private halls of residence shot up faster than bamboo in university areas, almost all just off city centres around the country. Derelict warehouses either came down or were refitted into halls, with many universities doing the same, expanding their teaching estates. It was a perfect, if accidental regeneration policy, delivering regeneration exactly where it was needed. The only drawback was in Leicester, where developments throw a slight spanner in any future plans to re-open the middle of the Great Central Line.

Salford Quays was of course a different matter, too far from the universities to benefit, and too large an area to be regenerated by a couple of blocks of flats. What has happened there in the last ten years is truly amazing. Obviously everyone knows about the BBC and the Lowry, but with those developments there are a host of hotels which Manchester United and Chelsea fans were drifting toward as I arrived on Monday night, just for starters.

I’d been sent up by the BBC to go on Breakfast, but as things turned out got bumped for the badger cull. Syria I could have understood, but the badger cull was always due to happen that day, so that was just bad planning. Dropping in to the Radio 4 studio for ‘You and Yours’ meant it wasn’t a total loss though. Being there, it was worth a wander and the levels of regeneration which have taken place in the last decade are astounding. Back then, a few houses were being built around the smaller quays, but since then flats, a shopping centre and a water sports centre which had a couple of kids being towed on surfboards by an overhead line, have appeared amongst a host of other initiatives.

On the other side of the River Irwell (also known at that point as the Manchester Ship Canal), so technically in Manchester I guess as that is the border, is the new (and already threatened by funding cuts) Imperial War Museum North and a new ITV building, still in progress. And there were plenty of other signs of regeneration on the way, both at the quays and on the tram on the way back. Besides a tour operator, the only thing that seemed very much missing for a canal were boats. While there was no sign that I saw of the financial sector, you could say this was the Canary Wharf of the North in terms of the recent transformation. 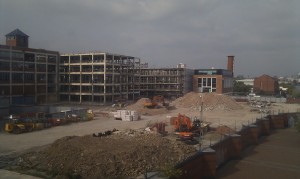 More regeneration in progress along the tram route.

This regeneration happened because regeneration was needed and a plan was put in place to make it happen. There was no extraneous magic wand which was just going to make regeneration happen, there were partners working towards a policy of making it happen. The idea that HS2 will make regeneration happen on its own is insane. It takes a lot of work and effort and, as the Institute for Economic Affairs rightly pointed out, money. If HS2 takes the official estimate of £50bn to build, where is that regeneration money coming from? Of course it is an additional cost. I have no idea what councils, government, RDAs or even the EU put into Salford Quays to make it happen, but I doubt it was zero. A high speed rail link wasn’t needed to make it a viable proposition. All they needed was a tram. Leeds should take note, and maybe all Old Oak Common needs is the Crossrail station they supposedly won’t get without HS2.

Salford Quays is the perfect recent example of the sort of regeneration which can happen when a concerted plan with funding is put in place. If this is the sort of outcome we want for other cities, why don’t we just do that? HS2 is no magic wand. With the money it will suck up, it’s more likely to be a tragic wand.

Whatsapp
Tags: News
News
2 comments to “You want to develop The North? Then develop the North!”