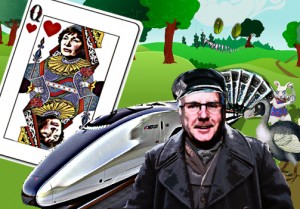 Dave had been sitting for a very long time, while Nick read the Lib Dem manifesto to him again. It was a hot day and Dave was wondering how the heck he managed to get saddled with Labour’s London to Birmingham hole in the ground.

He closed his eyes and wished he was somewhere else.

In the Council elections both his and the Tory party’s popularity had fallen a very long way, down down down, before landing ‘plop’ into a pile of detritus of their own making. What he had needed now was an escape clause, the key to an exit plan, but sadly the exit was looking smaller than ever, smaller even than the HS2 ‘cost benefit ratio’.

Meanwhile, almost every day, the cost predictions, by people who know something about such things, seemed to be growing alarmingly, these smart arses were now saying as much as 42 Billion, Dave began to cry…

He would have to go and see Pete. Supporters of the project were now becoming rarer than albino rabbits, though he did still have a few friends like ‘Mad Pete’, whose experience in the pop music industry always helped to cheer him up.

Pete was part of the ‘Taskforce’ that met just the other week for tea, Pete had worn his hat as usual, the one he used when he was being a steam train driver, it still had the price ticket on ’10/6′. He believed that HS2 was a brilliant idea and he couldn’t wait to see it so that he could write down its number in his book. Unfortunately, it was beginning to look like he would have to live to be very very old, if he was going to actually see it running.

Another friend was the nice chap, Lord whassisname, he wasn’t really a lord, because he hadn’t actually been added to the honours list yet. He was very important for the party, he gave them some of his spare money from time to time. He always smoked a pipe and thought a lot about matters philosophical, like whether HS2 would cure the ‘North South divide’ or ‘whether pigs have wings’.

Alison was queen of the project, she was inclined to get a bit flustered when asked hard questions, like when that nasty man on the radio queried why the cost of HS2, whatever that was, didn’t include the trains. Perhaps they were only going to build the track for the time being, because some people thought that by the time that was finished, trains might float along without rails anyway.

The problem was that every day the rest of the country were wondering whether the whole project had been written by a chap called Lewis Carrol. Dave wasn’t exactly sure who did write it, though it was possibly something to do with high finance, big business or party funding… who really knew?

It was beginning to feel like the whole matter of HS2 was on trial, the electorate, who listens to them anyway, were baying for blood. All the cards seem stacked against Dave these days and in his daydream, he could almost feel them closing in on him.

He was just about to scream when he woke up and saw that Nick had put down the manifesto and picked up the daily paper. The latest cost estimate was released, Dave read the headline, “80 billion pounds and rising”, it wasn’t a daydream now,  it was more like an unending nightmare.