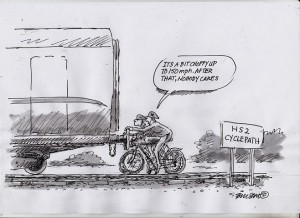 HS2 – A boon for psychopaths

In a move that smacks of increasing desperation, the Government has linked the creation of a national cycleway to the building of HS2, the Government’s proposed £50 billion high speed railway.

The Prime Minister announced a “feasibility study to look into creating a new national cycleway broadly following the route of the HS2 rail line”, along with a package of other measures designed to promote cycling.

Stop HS2 campaigners accused the Government of spin and greenwash.

Penny Gaines, chair of Stop HS2 said
“This is clearly another attempt by the Government to try and sell HS2 to a different set of voters. The money they have announced for cycling is only a fraction of a percent of the HS2 bill.
“Stop HS2 has long argued the need for local transport solutions for local people. But if the government was seriously committed to cycling, they could cancel HS2 and use the money to build the proposed cycle networks and still have enough left over to buy a brand new bike for every man, woman and child in the country.”

Joe Rukin, campaign manager for Stop HS2 said
“First it was going to be a water pipeline along side HS2, then fibre optic broadband and now a cycleway, because the Government is desperate to add some green credentials to a project which has none. This is just trying to polish a turd.”

Andrew Gibbs, Cyclist, Burton Green
“Including HS2 in a press-release about cycling is yet more cynical ‘greenwash’ from a government desperately trying regain momentum on their widely discredited grand-project. Any cyclist will tell you that pedalling in earshot of an ultra-high speed railway is unpleasant so to take HS2 as a concept for some sort of long-distance holiday is a complete nonsense. And the reality is that the HS2 proposals would destroy existing used and loved cycling routes, such as in my own area the Kenilworth to Berkswell Greenway and Connect2 link to Warwick University”

“The Kenilworth Greenway route from Kenilworth to Berkswell [ part of the Sustrans Connect2 ] including a link to Warwick University now has hundreds of users, running, cycling, walking, and riding. It includes the 40 mile “A Coventry Way” Challenge. HS2 will sever the University route and it will be obliterated from Burton Green to Berkswell. Locals are devastated, and have been calling for a deep bore tunnel to keep the route and Burton Green in tact which will also be severed.

“A better idea is to drop HS2 and build a cycle route instead.”

Sophie Lock, a local resident and regular cycle commuter between Berkswell and Stoneleigh, and who uses the Greenway regularly, comments
“More investment for cycling is good news as long as it results in many more people cycling much more regularly. However, if it goes ahead, HS2 will destroy the Greenway – along with so much else – and effectively removes a vital, traffic-free route for local cyclists, walkers and riders”

Mike Geddes, from Offchurch said
“In Offchurch HS2 would cut right across the Offchurch Greenway (a pedestrian and cycle route) and Sustrans cycle route R41. While both routes would probably be reinstated in some way, their current rural character and likely usage would be seriously compromised.

“In this area, any cycleway following the route of HS2 would be totally unable to ‘link communities to work, schools and shops’ as the route bears no relationship to such local travel patterns.

“Cameron’s statement is just so much greenwash – another attempt to put a sticking plaster over the disruption which would be the real result of HS2.”

“This is a classic example of trying to put the gloss onto HS2. It would be totally impractical for cyclists. With the proposed HS2 route and no stations between London and Birmingham, the idea that this suggested cycle path will link stations to other facilities is barking mad.

“HS2 follows a greenfield route for much of its route, going from nowhere to nowhere. Anyone who wants to cycle through the countryside won’t want to cycle next to a train passing at 250mph – it’s bad enough cycling next to a truck doing 60mph on a dual carriage way.”

“This is a sign of desperation from the Government. The latest YouGov poll shows that opposition to HS2 is continuing to grow, so they are trying to tie HS2 into any good news story they can cram it into.”