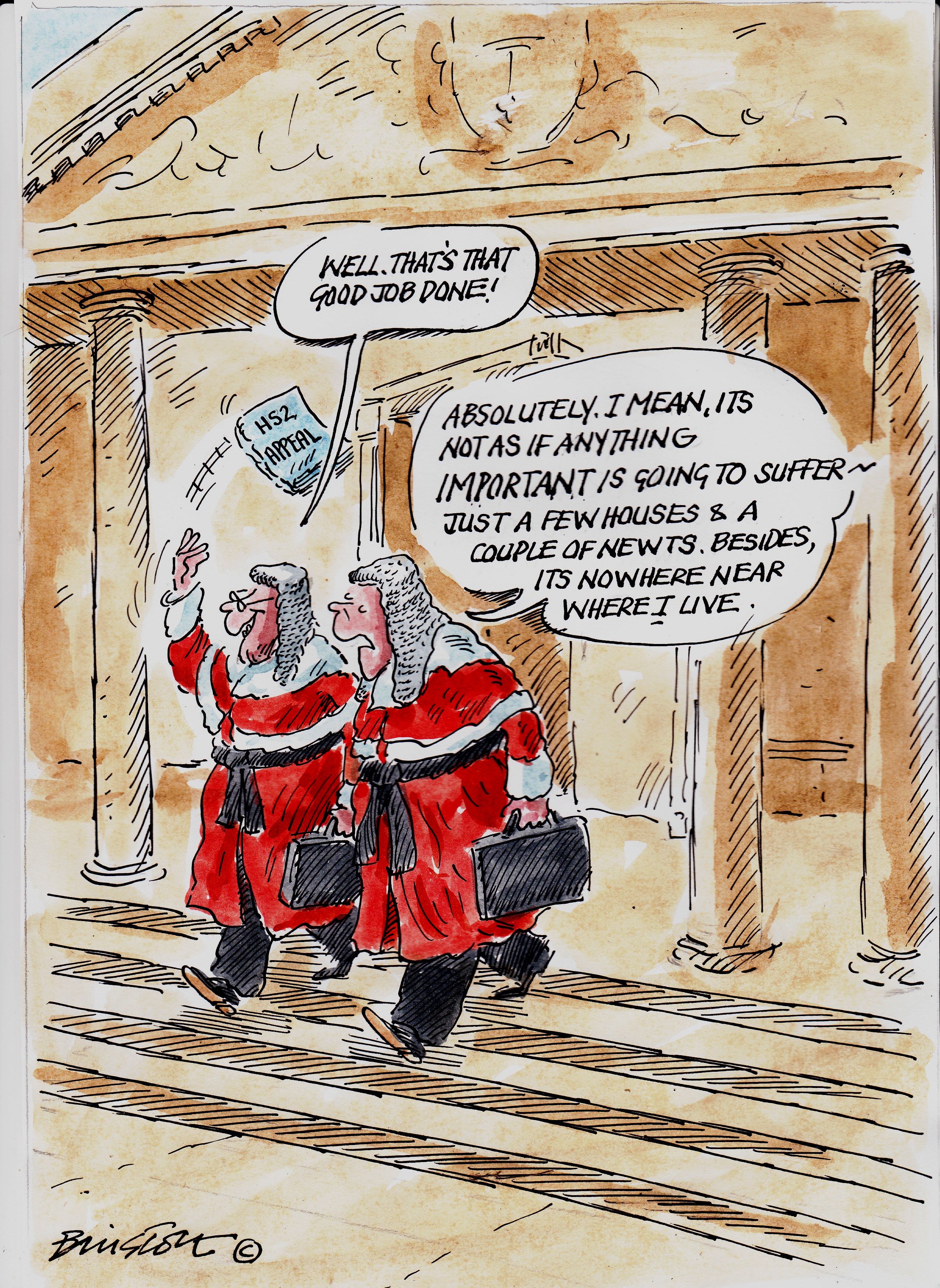 Today in the Court of Appeal, The Master of the Rolls (Lord Chief Justice Dyson), Lord Justice Richards and Lord Justice Sullivan handed down their decision dismissing the Appeals brought against the Department for Transport’s decision to progress with High Speed 2 (HS2) by an alliance of 15 local authorities, HS2Action Alliance and Heathrow Hub Limited.

The three Court of Appeal judges considering the judicial reviews on HS2 case were divided on whether a Strategic Environmental Assessment (SEA) should have been undertaken for the proposed high speed line, HS2 and have granted leave of appeal to have the case heard at the Supreme Court.

Penny Gaines, chair of Stop HS2 said
“The judges were split on whether a Strategic Environmental Assessment and an Environmental Impact Assessment should have already been done on a project that has been underway for over three years. But they agreed that the draft environment assessments which had been done didn’t match the directives, and gave immediate leave to appeal.

“In the original ruling and the appeal, the judges have not looked at whether HS2 is a sensible way of spending £50 billion of taxpayers money. They’ve said it’s up to Parliament to make the decision. But it is vital that Parliament has the right information they need on the environmental devastation HS2 will cause, and as yet, HS2 Ltd simply have not done the work.”

Joe Rukin, Stop HS2 campaign manager said
“Simon Burns is proposing we spend £50bn on a railway which has no support from economists, massive criticism from rail experts and academics and no environmental creditials. That man has no right to lecture anyone about wasting taxpayers money.

“The appeals that are happening are being funded by action groups and individuals, who feel strongly that the Government needs to be held to account before they spend £50bn on a railway which will be so very damaging for the environment.”

Commenting on the decision, Hilary Wharf, director, HS2AA, said;
“We will continue our fight to make sure that the Government does not duck its environmental responsibilities over HS2. We can see from the Phase 1 Draft Environmental Statement that cost savings are the top priority rather than protecting irreplaceable landscapes for future generations. The Government must properly take the environment into account.

“There is little case law on the specific point of law on which we lost. We are confident that our position is a strong one and we are pleased that the Court has allowed our appeal to the Supreme Court.

“It’s concerning however that we have to go to the highest court in the land to make the Government give the environment the respect it deserves”.

Councillor Martin Tett, of the 51M group of councils proposing an alternative scheme commented:
“Lord Justice Sullivan gives a very strong steer that HS2 Ltd has failed both in its obligation to fully assess the environmental implications of the project and vitally to assess these against the alternative we have put forward. His comments in his Judgement are damning of the Department for Transport’s approach stating: “If, as I have concluded, an SEA is required and there has not been substantial compliance with the SEA Directive, it would be difficult to think of a more egregious breach of the Directive given the scale of the HS2 project and the likely extent of its effects on the environment.”

Councillor Tett concluded: “This is another example of the Department for Transport and HS2 Ltd riding roughshod over public opinion, ploughing ahead regardless of what local communities want and ignoring the environmental merits of the alternatives. We have evidence that our alternative to HS2 would provide all of the capacity required, far more quickly, at a fraction of the cost and would be less damaging to the environment.”