This morning, protestors against HS2 held a photocall to mark the start of a 7 day set of legal challenges against HS2. 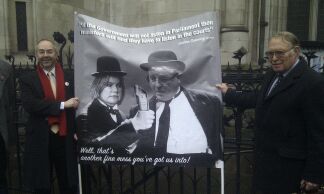 Councillors outside the Royal Courts of Justice 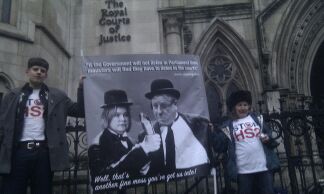 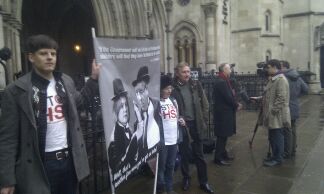 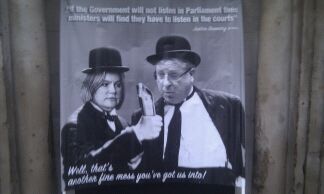 Joe Rukin, Campaign Manager for Stop HS2 said
“When you have Conversative councillors bringing a case against Conservative ministers in a Conservative-led Government, you know that we are very confident that there are huge flaws in the HS2 project. We have an extremely strong case against HS2 and it is time that the Government looked at the facts and cancelled HS2 immediately.

“The consulation was hugely flawed from the start, and these errors continued when they simply ignored over 1000 consultation responses, including mine, in their original analysis. When they claimed that none of these responses said anything they hadn’t already accounted for, it just shows they never even read mine.”

Penny Gaines added
“The Department for Transport claimed that the WCML franchise process was robust when Virgin brought a judicial review over it. These claims collapsed, and the Secretary of State for Transport was left red-faced to make late night phone calls to Richard Bransom to own up his Department’s failings. It’s time ministers owned up to the huge and fundamental flaws with HS2 and cancelled it immediately.”

The banner quotes Justine Greening when she was opposing Heathrow expansion
“If the Government will not listen in Parliament, then ministers will find they have to listen in the courts.”